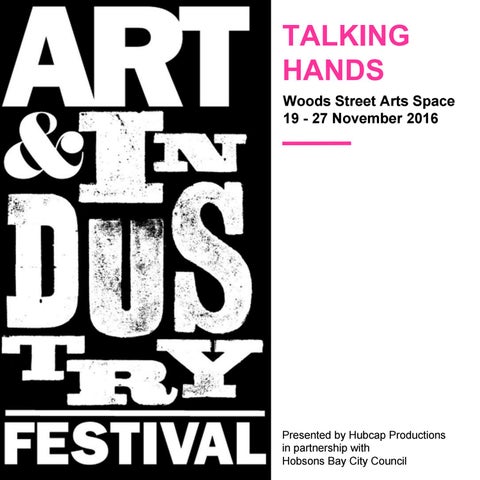 A large format photography exhibition of black and white images by Altona resident Zoya Martin, Talking Hands explored the diverse experiences of Hobsons Bay workers, their skills, struggles and passions as told by their hands. The exhibition at Woods Street Arts Space, Laverton was opened on Sat 19 November by the Mayor of Hobsons Bay, Cr Sandra Wilson, and ran till Sun 27 November. The project was featured as part of the festival launch at Scienceworks in Spotswood on 9 September. The photos were also presented as part of SPARK Family Night at Seaworks on Fri 25 November.

THE PROJECT Speaking at the opening of this exhibition, Art &amp; Industry Festival Director Donna Jackson said Zoya’s approach to exploring the stories and life-long experiences of the workers of Hobsons Bay through photographing their hands, enabled her to illustrate the human dimension of the region’s industrial heritage in an accessible and engaging way. Zoya aimed to create beautiful, authentic, arresting works that would resonate with project participants and the broader community and highlight the diversity of the area. She also wanted to increase local access to the Woods Street Arts Space and extend her skills as an artist.

Following her participation in the â&amp;#x20AC;&amp;#x2DC;Lion Taming Your Arts Projectâ&amp;#x20AC;&amp;#x2122; workshops, Zoya went into the homes of 15 workers from a wide variety of industries to talk about their working lives. With the focus on hands, people opened up more easily than if she was asking them to participate in a portrait session. She asked them to think about what their hands were doing throughout their working life. She began the project at home with her father, Rob Martin, a former aircraft builder who built their family home in Altona in 1980. Other subjects included a boat-builder of 54 years, a stonemason, a nurse from the Altona hospital and 4th generation football maker Syd Sherrin, who still produces a few balls each year in his Williamstown garage.

By exploring stories of working lives, the artist has been able to consider the extensive changes in industry in recent years. The gradual introduction of mechanisation and automation, while making life easier, also had the effect of separating workers physically from the product they were creating. The impacts on them were economic, social and emotional. Zoya acknowledged the support she had throughout the process of concept development, image gathering and exhibition design by Donna Jackson and by her father who provided technical support and assistance in hanging the show. Music for the opening was provided by the band MindJam. The artist also noted the generous support she received from HBCC staff, particularly Tania Blackwell.

Talking Hands positively addressed a number of HBCC objectives including geographic spread for the festival across the city, and enhanced media coverage, with a big focus on this project, including the magazine cover of ‘M’ in Melbourne’s Age newspaper on Sunday 6 November 2016. The project also delivered strong community engagement outcomes. Mayor of Hobsons Bay, Cr Sandra Wilson, said at the exhibition opening: “As a council we really wanted to maximise our engagement with the local community through this festival and it has exceeded all expectations. The hands are talking to me! I’m picking up a lot of amazing work, passion and energy from these hands. It’s just beautiful.” Talking Hands 2016: ‘M’ Magazine Photo: Lindy Allen

Audience Responses The project’s strong resonance with the local community positively affirmed the following HBCC objectives: Raising the profile of the city’s industrial sector “I’m very impressed with it. We saw it in our local newspaper and decided to come along. Things have become less worker oriented and more machine oriented. People who lived through it know about it but others have no idea how things used to be 50 years ago. This festival is a very good for the area.” Lillian White (aged 90, Williamstown resident who drove herself and two friends to the exhibition)

“It’s beautiful. Really captivating, totally unexpected. We’ve lost the art of story-telling. Allowing people to congregate in a space and share their stories is really important and helps us to preserve the knowledge base we have in communities. Andrew Gurman, local youth worker Talking Hands 2016: Lillian White and friends at the opening Photo: Lindy Allen

THE IMPACT OF THE PROJECT ON THE ARTIST Zoya Martin is an emerging artist who worked as a graphic designer and illustrator for over a decade. She has an Honours Degree in Graphic Design and is currently undertaking a Masters in Arts Therapy. She acknowledged that undertaking a solo exhibition was a considerable stretch for her. â&amp;#x20AC;&amp;#x153;The Lion Taming process was satisfying and rewarding and it has been wonderful to have Donna Jackson as a mentor.â&amp;#x20AC;?

“One day she said, ‘Being an artist is having a list of things: you have an idea, you know what you want to accomplish, you make your list and you just work through it.’ It sounds very unromantic, but this approach makes it feel achievable. With the project, I wanted to get to know my community better, feel part of it. I hadn’t felt that before. It’s been lovely meeting people, gathering their stories, being here today and seeing everyone. I thought this feeling of connectedness might just be a temporary thing but there is a shift in me. I definitely feel now that I’m part of this community.”

“Zoya has been able to capture something about each and every person in these beautiful photographs. It’s really added depth to the festival. It recognises the hard work done by people in this area in a way that really honours their working lives.” Donna Jackson, Artistic Director, Art &amp; Industry Festival, at the exhibition opening

A large format photography exhibition of black and white images by Altona resident Zoya Martin, Talking Hands explored the diverse experiences of Hobsons Bay workers, their skills, struggles and passions as told by their hands. 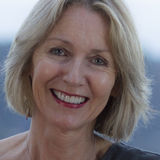