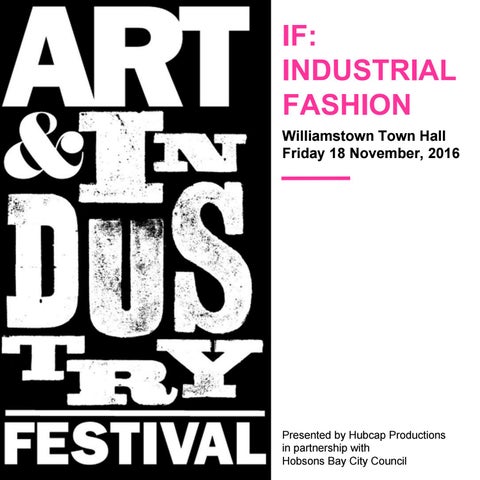 Artistic Director of the Art & Industry Festival Donna Jackson invited costume and clothing designers from the western suburbs to create new garments inspired by local industrial architecture to reinvent the built environment in wearable form. IF: Industrial Fashion was presented at the Williamstown Town Hall on Friday 18 November, supported by a community cast and attended by approximately 220 people.

THE PROJECT IF: Industrial Fashion was the opening event of the festival and aimed to introduce the theme of art and industry in a fun, wild, sexy and humorous way. It aspired to engage local residents with ideas around design and architecture, honour the long history of services including nursing and the fire brigade and showcase the breadth talent in the western suburbs. Over 6 months, around 75 local people took part in design development and gown construction, dance, music and choir workshops and rehearsals across the Hobsons Bay City Council area. Participants ranged in age from 7 to 83. Creative development workshops and rehearsals were led by Artist Director Donna Jackson who collaborated with Costume Manager Kaye Smith, Music Director Jenifer Lund, Choreographer Nicole Ellis and dancers from local performing artsAdelaide school MDX. Donna Jacksonâ&#x20AC;&#x2122;s theatre project Dust: SA 2013 Industrial Fashion 2016: Firemen from Newport Fire Station model the history of fire fighting garments Photo: Lindy Allen

Several designers created gowns inspired by iconic local mega-industries including Mobil and Qenos while others explored industries such as the woollen mills, the abattoirs and the glass making industry. The show featured gowns inspired by both the old coal-fired Newport Power Station and its new gas-fired replacement and several outfits exploring the ever-present naval vessels and container ships that pass so close to the shores of Williamstown and Altona you feel you could touch them. The parade included performance interludes which paid tribute to the local railway-yard sport of trugo and playfully exposed the male-oriented obsession with electrical tools. Through presenting these authentic lived experiences of life in the western suburbs in an accessible and exciting way, Jackson aimed to demonstrate that festivals can engage with ideas, they can take explore issues of the environment and the industrial landscape and they can provoke a sense of pride in the local area.

Designers and community performers were supported by an excellent production team: a lighting design by renowned veteran Phil Lethlean, operations by Kelly Harrington and sound by Optical Audio. Costumes from the event were installed in the gallery space at the Louis Joel Arts & Community Centre in Altona the following day where the public were able to view the costumes up close and meet the designers at artistsâ&#x20AC;&#x2122; talks held throughout the festival. The installation, called Wear & Share, attracted an estimated 400 visitors during the festival week.

THE IMPACT OF THE PROJECT Audiences The audience response was overwhelmingly glowing including an enthusiastic thumbs up from former Premier of Victoria, Steve Bracks, who said: â&#x20AC;&#x153;I thought it was outstanding. It was of state-wide quality. I felt proud, being a local. It is showcasing the region and showcasing it well with style and great humour. It was very, very good.â&#x20AC;? Industrial Fashion 2016: Prev page: Defence Ship gown by Stephanie England Left: Newport Freezer Works outfit by Edie Kurzer Photos: Lindy Allen

“I thought it was fantastic. Only in the West! I recognised a lot of the costumes, they are local landmarks, but they’ve been very clever, very creative. I’m always proud to live in the West.” Gaye Whitney, Newport resident Industrial Fashion 2016: Mobil Take Five Tank Dress by Alexandra Zvi Photo: Lindy Allen

“I just loved every minute of it. Fantastic, just the way everything was represented, the costumes. It’s so refreshing to see the West portrayed in such an interesting way. We have a lot to offer and we have a lot of talent.” Linda Schobben, Newport resident

“Donna has just had such a huge impact on the community. Just to look at what the community can produce when they all work together. It was so heart-warming and exciting.” Zoya Martin, Altona resident and A&IF artist (Talking Hands)

“I thought it was very good. I was really surprised it was such high class.” Carol Webb

“I thought it was super. Everything the Donna does is just wonderful. I’ve been to most of her shows, they are all great. We didn’t know what to expect. I’d love it to become a regular event.” Nicky Shoreland

Raise the profile of the city’s industrial sector: “It was so successful, so mind-blowingly good and uplifting. The creativity that was on show from so many people, the performance and the fun – it was a great night. The sights that we live with every day, like the Newport Power Station – to have it transformed into wearable art, it’s very special.” Mayor of Hobsons Bay, Sandra Wilson

“It was brilliant. A great representation of what the West has to offer, particularly from the industrial focus. People take it for granted but it was a beautiful pictorial presentation through music, colour and dance of what we have to offer.” Frank Schobben, Newport resident

Admin Officer Robert Falzon from Louis Joel Arts & Community Centre said the most overheard comments were “amazing” and “incredible work”. He noted a few people were disappointed it wasn’t on for longer as they would have liked time to arrange to bring friends to see it. Relative to other exhibitions at the centre, Wear & Share rated very strongly for attendance. Industrial Fashion 2016: Kimono based on Newport Underpass by Edie Kurzer Photo: Lindy Allen

THE IMPACT OF THE PROJECT Artists and participants Community engagement and capacity building Nicole Ellis, instructor from local performing arts school MDX, choreographed the fashion parade, and spoke about the her involvement in terms of raising her awareness about the field of community-based practice and the positive impacts it can have within the community. Industrial Fashion 2016: Woollen Mill Dress 2 by Theresa Dowd Photo: Harmonique Photography

“It was a new experience for me, something I’ve never done before. I never knew about this way of working. To see the community all get together and all these amazing designers, it’s opened me up to a whole new world. It was great fun working with Donna, seeing how a production is put together. I’ve choreographed and taught little kids, concert performances for dance schools and things like that, but working with people who’ve never danced before was a new thing. It gets everyone in the community involved. It’s so important to have events like this, to see new designers coming up that you would never see. It’s a good way for them to get their work out there. It’s opened me up to a whole world of new moves and styles of productions. I’d love to do something like this again, to create new things.”

Ashlara Nelson (aged 14), MDX student and performer, and model of the Qenos dress was enthusiastic about the opportunity IF had given her to work with other artists and performers. “I started dancing at MDX this year. This show has been an amazing opportunity, and it’s been great to work with Nicole (Ellis, IF Choreographer) as well. There are so many ideas – I never would have thought to make a dress out of milk bottles, or about the power station. Jo (Boyd, dress designer) is just so creative. It’s been a really great experience.”

Music Director, Jennifer Lund, has considerable experience working in community productions but none-the-less found that IF challenged her to extend her skills in new ways.

â&#x20AC;&#x153;I see myself as a classical pianist so working in this way presents challenges. Some of the designs came to life in music immediately - the ship dress, I instantly thought, classical, Vivaldi, that worked. Some were trickier. The Power station and the nursesâ&#x20AC;&#x2122; sequences. Individually they worked but when we ran the scenes together, we needed to keep the musical ideas running through both scenes, the same instruments, but this meant we had to flip the music around. Challenges are important because they force you to search for different types of music. Everyone, was doing their best. Some people had never done anything like this before but there was a lot of respect for each other and everyone participated in bouncing ideas around, it felt shared.â&#x20AC;? Industrial Fashion 2016: Sequence: Nurses from the Williamstown Hospital Photo: Lindy Allen

â&#x20AC;&#x153;People really seemed to get that we were honouring the area. I hope one of the outcomes of Industrial Fashion will be that people will see that festivals can engage with ideas like design and architecture.â&#x20AC;? Donna Jackson, Artistic Director, Art & Industry Festival