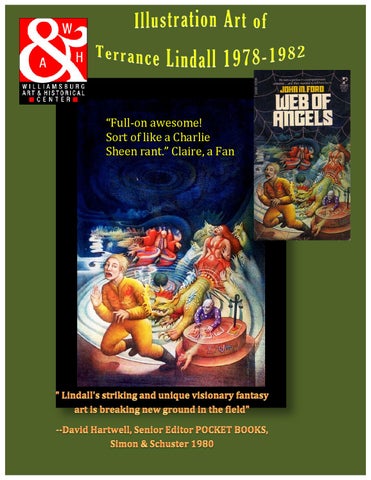 Lindall illustrated  for  some  of  the  most  outstanding  science  fiction,   fantasy  and  comic  magazine  writers  of  the  20th  century.  The  writers   were  winners  of  Hugo  Awards,  Bram  Stoker  Awards,  Nebula   Awards,  and  more.  These  writers  wrote  for  Star  Trek,  Star  Wars   and  other  iconic  popular  culture  creations.   WHAT  PEOPLE  SAID  ABOUT  LINDALL’S  ILLSUTRATION  ART

" It is nice to know there is a latter day Bosch around"-- Dr. Leo Steinberg, Art Critic " Clearly avoiding the view that Pop imagery is inherently a sign of trauma, Terry Lindall employs the cartoon elements of style with a charming and often unnerving directness and simplicity, frequently aimed at causing a trauma all his own. This is particularly the case with his illustrations of Milton’s Paradise Lost, with which he reaches a hyper-intensified and nearly hysterical verve. " --Mark Daniel Cohen, Critic for Review Magazine and NY Arts Magazine " The high water mark in the Golden Age of this uniquely American Art form.." --James Kalm, NY Arts Magazine " Surreal nightmare...DNA seems to have gone berserk" --The New York Art World Magazine Nov. 1999 " ...since I was a teenager back in 1982... I’ve considered Terrance Lindall one of the globe’s greatest artists. My particular favorite is his intense adaptation of PARADISE LOST, which never fails to instill a pervasive dread in my mind." Greg Fasolino 1997 " Natural insanity" Art Alternative Magazine 1996 " ...eerie, magical, dreamlike, devastating, jarring...Lindall's illustrative style is magnificent!" -- Julie Simmons, Editor in Chief, Heavy Metal Magazine 1980 " Lindall's use of color & detail to achieve effect, his dramatic compositions, but most of all his totally unique vision make him a new wave artist to be reckoned with." -- Louise Jones, Senior Editor, Warren Communications 1980 " Lindall's striking and unique visionary fantasy art is breaking new ground in the field" --David Hartwell, Senior Editor POCKET BOOKS, Simon & Schuster 1980 " My reward for the purchase of a Lindall masterwork has been a cover that draws raves. It is a very valuable addition to my collection of fine art." -- Stuart David Schiff, twice winner of the World Fantasy Award & editor of the acclaimed WHISPERS anthologies

John Milo  Ford,  Winner  of  the  World  Fantasy  Award  and  the  Philip  K  Dick   Award,  born  East  Chicago,  Indiana:  10  April  1957,  died  Minneapolis,   Minnesota:  24/25  September  2006  [Ford  died  alone  around  midnight]   John Ford’s first novel, Web of Angels (1980), Pocket Books, cover by Terrance Lindall, can be seen in retrospect as a quite remarkable rendering of the basic venues exploited by Cyberpunk some years later given definitive form by William Gibson in Neuromancer (1984). Web's automatic defense systems – Geisthounds –hunt him remorselessly. Grailer is a Webspinner, one of the handful of extraordinary people who can manipulate the Web--literally the mind of the universe. He is thus a space outlaw and must go underground, until his powers are tested--and he is ready to do battle with the Web itself. Grailer witnesses the murder of his lover Sharon Rose by the Geisthounds. When I was offered this commission I was asked to do a very outstanding cover for John since it as his first novel. Later he would become quite famous, even working on Star Trek material. My reputation at that time after doing Warren Magazine covers and even winning a Warren Award, was that I was the new kid on the block and would attract attention with a new style of illustration. So I really did my best to take several of the characters and place them in the painting. I did NOT put that silly spider web in the painting because that is NOT what the world-wide computer web is. I represented it as waves that one sees in the painting emanating from Sharon Rose who is being devoured by Geisthounds. The art director put that spider’s web in, making the whole thing hokey to my mind. Around 1980 computers were just becoming more commonly used in business and publishing. Not many were on-line with the world-wide-web, so perhaps the art director felt that a spider’s web was a visual that explained the title to potential readers who were not especially computer literate. As for the Geisthound “exploding from her crotch,” as one amused fan noted, well, the dark webmaster used her sexual attraction to get to him, a very appropriate symbolism. I think that my approach, although it would have been perfect for a comic book cover, was not the “realistic” type of art that appeals to readers of science fiction, as one would see on a Star Wars book cover with nicely done portraits of Skywalker and Leah who are doing nothing more than standing against a skein of stars. For the most part science fiction illustration overall is quite sedate or even mediocre. The art may imitate in a reasonable way the content of the novel or story, but it seldom has a “wow” character to it. I intended a “wow.” I got it, but not everybody liked it. In any case I feel the art is quite good as comic illustration. I left a lot of space above the main figures for the title to be placed by the publisher. I may actually add some stars and constellations to make it better, or I may leave it as an example of illustration. I am pleased that in my career I have been part of many “firsts” including this first cyberpunk novel by John Ford. Around that time too, my art appeared on Pamela Sargeant’s WATCHSTAR and “The Annual Best of Rod Serling’s Twilight Zone Magazine.” That was in my same unique style too, but everybody seemed to like that one.

Notice how  short  the  story  is!  Archie  was  a  master  writer.  Like  Hemingway  he   would  carve  down  words  into  the  simplest  most  powerful  statement  to   achieve  effect.  He  knew  that  the  illustrations  would  complete  the  work.

My painting  is  now  in  a  famous  collector’s  home.  The  collector  was   featured  in  Architectural  Digest  once.  That  delighted  me.

Above: Terrance  at  a  Kate  Spade  Photo  Shoot   at  the  Robert  Fulton  mansion

Right: Lindall’s  cover   for  The  Cambridge   Companion  to   Paradise  Lost

*********The following are comments on Wickenheiser’s Milton book and Milton collection.********* Wickenheiser’s Milton book is much heralded as a “grand collecting and cataloguing achievement,” with “devotion to purpose. . .[and] attention to bibliographical detail. Future Miltonists will be forever obliged to [him] for all phases of [his] extremely rewarding work” (Arthur Freeman, former Harvard faculty member, now residing and writing in London after being with Quaritch Antiquarian Booksellers for many years). “What a wonderful book! It is a great contribution to Milton studies, to bibliography, and to art history –– the Fuselis and Martins are especially magnificent” (John Shawcross, renowned Miltonist, immediately upon the publication of the book). Shawcross had earlier said of the collection itself: Wickenheiser’s collection is one of the major collections of materials related to John Milton, editions and studies and artworks, in the world, indicating the breath and nature of Milton’s position in the literary, political, religious, and sociological world over the nearly three and a half centuries since his death.” Noted Miltonist Al Labriola wrote of the collection and book: “A sumptuous catalogue of the Wickenheiser Collection at the Thomas Cooper Library of the University of South Carolina, superb down to the last detail with illustrations which are breathtaking. The book is a milestone in Milton studies, and the Wickenheiser Collection is a treasure trove for archival research.” Terrance Lindall did the cover for the first cyberpunk novel by the renowned author John Ford. This is a commentary on it by the illustrator...

Terrance Lindall did the cover for the first cyberpunk novel by the renowned author John Ford. This is a commentary on it by the illustrator...