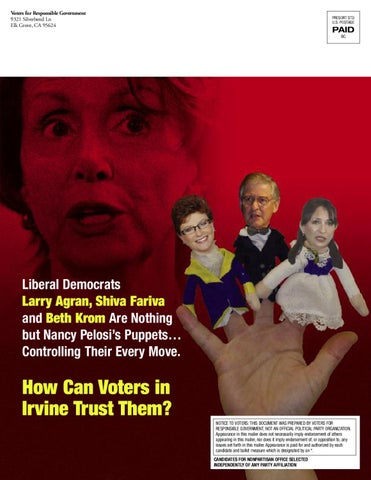 Liberal Democrats Larry Agran, Shiva Fariva and Beth Krom Are Nothing but Nancy Pelosi’s Puppets… Controlling Their Every Move.

How Can Voters in Irvine Trust Them? NOTICE TO VOTERS: THIS DOCUMENT WAS PREPARED BY VOTERS FOR RESPONSIBLE GOVERNMENT, NOT AN OFFICIAL POLITICAL PARTY ORGANIZATION. Appearance in this mailer does not necessarily imply endorsement of others appearing in this mailer, nor does it imply endorsement of, or opposition to, any issues set forth in this mailer. Appearance is paid for and authorized by each candidate and ballot measure which is designated by an *. CANDIDATES FOR NONPARTISAN OFFICE SELECTED INDEPENDENTLY OF ANY PARTY AFFILIATION

Irvine Voters CAN NOT TRUST Pelosi’s Liberal Democrat Puppets - Agran, Farivar and Krom! Just like Pelosi we Can Not Trust Larry Agran and his Out-of-Control Spending… • He has spent over $220 Million on a Great Park that Doesn’t Exist. - OC Weekly, Aug. 19th 2010 • Wants to Spend $250 Million on Buses That No One is Using

We Need to STOP Liberal Democrat Shiva Farivar from Becoming OUR Nancy Pelosi… • If Elected to the City Council she will be a Rubber Stamp for the Liberal Agran/Pelosi Agenda of Waist full Spending, Over Regulation and False Promises.

If elected to Congress Beth Krom could Become the Biggest Pelosi Puppet of All! • Her First Vote Would be to Re-Elect Nancy Pelosi Speaker of the House! 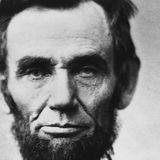