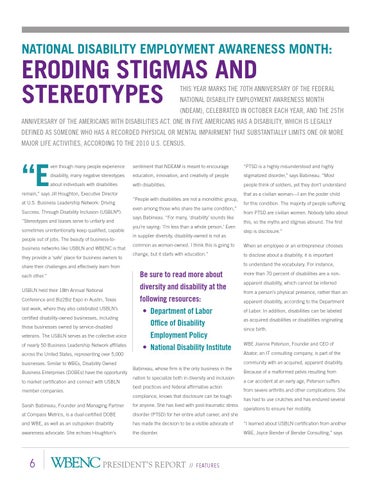 THIS YEAR MARKS THE 70TH ANNIVERSARY OF THE FEDERAL NATIONAL DISABILITY EMPLOYMENT AWARENESS MONTH (NDEAM), CELEBRATED IN OCTOBER EACH YEAR, AND THE 25TH ANNIVERSARY OF THE AMERICANS WITH DISABILITIES ACT. ONE IN FIVE AMERICANS HAS A DISABILITY, WHICH IS LEGALLY DEFINED AS SOMEONE WHO HAS A RECORDED PHYSICAL OR MENTAL IMPAIRMENT THAT SUBSTANTIALLY LIMITS ONE OR MORE MAJOR LIFE ACTIVITIES, ACCORDING TO THE 2010 U.S. CENSUS.

ven though many people experience

sentiment that NDEAM is meant to encourage

“PTSD is a highly misunderstood and highly

education, innovation, and creativity of people

about individuals with disabilities

people think of soldiers, yet they don’t understand

“Stereotypes and biases serve to unfairly and sometimes unintentionally keep qualified, capable people out of jobs. The beauty of business-tobusiness networks like USBLN and WBENC is that they provide a ‘safe’ place for business owners to share their challenges and effectively learn from each other.” USBLN held their 18th Annual National Conference and Biz2Biz Expo in Austin, Texas last week, where they also celebrated USBLN’s certified disability-owned businesses, including those businesses owned by service-disabled veterans. The USBLN serves as the collective voice of nearly 50 Business Leadership Network affiliates across the United States, representing over 5,000 businesses. Similar to WBEs, Disability Owned Business Enterprises (DOBEs) have the opportunity to market certification and connect with USBLN member companies.

“People with disabilities are not a monolithic group, even among those who share the same condition,” says Babineau. “For many, ‘disability’ sounds like you’re saying: ‘I’m less than a whole person.’ Even in supplier diversity, disability-owned is not as

that as a civilian woman—I am the poster child for this condition. The majority of people suffering from PTSD are civilian women. Nobody talks about this, so the myths and stigmas abound. The first step is disclosure.”

common as woman-owned. I think this is going to

When an employee or an entrepreneur chooses

change, but it starts with education.”

to disclose about a disability, it is important to understand the vocabulary. For instance,

Be sure to read more about diversity and disability at the following resources: • Department of Labor Office of Disability Employment Policy • N ational Disability Institute

Babineau, whose firm is the only business in the nation to specialize both in diversity and inclusion best practices and federal affirmative action compliance, knows that disclosure can be tough

Because of a malformed pelvis resulting from a car accident at an early age, Peterson suffers from severe arthritis and other complications. She has had to use crutches and has endured several

for anyone. She has lived with post-traumatic stress

at Compass Metrics, is a dual-certified DOBE

disorder (PTSD) for her entire adult career, and she

and WBE, as well as an outspoken disability

has made the decision to be a visible advocate of

“I learned about USBLN certification from another

operations to ensure her mobility.