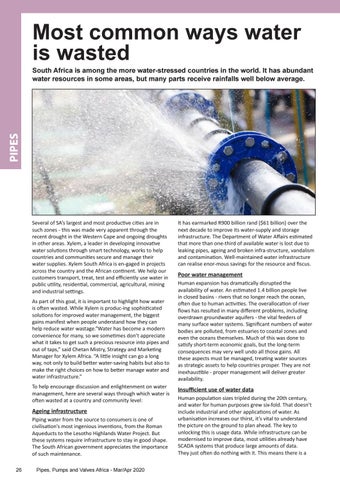 Most common ways water is wasted

South Africa is among the more water-stressed countries in the world. It has abundant water resources in some areas, but many parts receive rainfalls well below average.

Several of SA’s largest and most productive cities are in such zones - this was made very apparent through the recent drought in the Western Cape and ongoing droughts in other areas. Xylem, a leader in developing innovative water solutions through smart technology, works to help countries and communities secure and manage their water supplies. Xylem South Africa is en-gaged in projects across the country and the African continent. We help our customers transport, treat, test and efficiently use water in public utility, residential, commercial, agricultural, mining and industrial settings. As part of this goal, it is important to highlight how water is often wasted. While Xylem is produc-ing sophisticated solutions for improved water management, the biggest gains manifest when people understand how they can help reduce water wastage.“Water has become a modern convenience for many, so we sometimes don’t appreciate what it takes to get such a precious resource into pipes and out of taps,” said Chetan Mistry, Strategy and Marketing Manager for Xylem Africa. “A little insight can go a long way, not only to build better water-saving habits but also to make the right choices on how to better manage water and water infrastructure.” To help encourage discussion and enlightenment on water management, here are several ways through which water is often wasted at a country and community level:

Ageing infrastructure Piping water from the source to consumers is one of civilisation's most ingenious inventions, from the Roman Aqueducts to the Lesotho Highlands Water Project. But these systems require infrastructure to stay in good shape. The South African government appreciates the importance of such maintenance. 26

It has earmarked R900 billion rand ($61 billion) over the next decade to improve its water-supply and storage infrastructure. The Department of Water Affairs estimated that more than one-third of available water is lost due to leaking pipes, ageing and broken infra-structure, vandalism and contamination. Well-maintained water infrastructure can realise enor-mous savings for the resource and fiscus.

Poor water management Human expansion has dramatically disrupted the availability of water. An estimated 1.4 billion people live in closed basins - rivers that no longer reach the ocean, often due to human activities. The overallocation of river flows has resulted in many different problems, including overdrawn groundwater aquifers - the vital feeders of many surface water systems. Significant numbers of water bodies are polluted, from estuaries to coastal zones and even the oceans themselves. Much of this was done to satisfy short-term economic goals, but the long-term consequences may very well undo all those gains. All these aspects must be managed, treating water sources as strategic assets to help countries prosper. They are not inexhaustible - proper management will deliver greater availability.

Insufficient use of water data Human population sizes tripled during the 20th century, and water for human purposes grew six-fold. That doesn’t include industrial and other applications of water. As urbanisation increases our thirst, it’s vital to understand the picture on the ground to plan ahead. The key to unlocking this is usage data. While infrastructure can be modernised to improve data, most utilities already have SCADA systems that produce large amounts of data. They just often do nothing with it. This means there is a