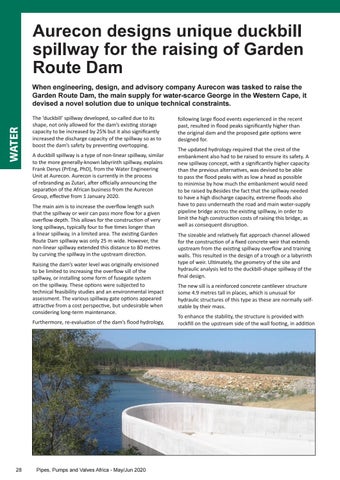 When engineering, design, and advisory company Aurecon was tasked to raise the Garden Route Dam, the main supply for water-scarce George in the Western Cape, it devised a novel solution due to unique technical constraints. The ‘duckbill’ spillway developed, so-called due to its shape, not only allowed for the dam’s existing storage capacity to be increased by 25% but it also significantly increased the discharge capacity of the spillway so as to boost the dam’s safety by preventing overtopping. A duckbill spillway is a type of non-linear spillway, similar to the more generally-known labyrinth spillway, explains Frank Denys (PrEng, PhD), from the Water Engineering Unit at Aurecon. Aurecon is currently in the process of rebranding as Zutari, after officially announcing the separation of the African business from the Aurecon Group, effective from 1 January 2020. The main aim is to increase the overflow length such that the spillway or weir can pass more flow for a given overflow depth. This allows for the construction of very long spillways, typically four to five times longer than a linear spillway, in a limited area. The existing Garden Route Dam spillway was only 25 m wide. However, the non-linear spillway extended this distance to 80 metres by curving the spillway in the upstream direction. Raising the dam’s water level was originally envisioned to be limited to increasing the overflow sill of the spillway, or installing some form of fusegate system on the spillway. These options were subjected to technical feasibility studies and an environmental impact assessment. The various spillway gate options appeared attractive from a cost perspective, but undesirable when considering long-term maintenance. Furthermore, re-evaluation of the dam’s flood hydrology,

following large flood events experienced in the recent past, resulted in flood peaks significantly higher than the original dam and the proposed gate options were designed for. The updated hydrology required that the crest of the embankment also had to be raised to ensure its safety. A new spillway concept, with a significantly higher capacity than the previous alternatives, was devised to be able to pass the flood peaks with as low a head as possible to minimise by how much the embankment would need to be raised by.Besides the fact that the spillway needed to have a high discharge capacity, extreme floods also have to pass underneath the road and main water-supply pipeline bridge across the existing spillway, in order to limit the high construction costs of raising this bridge, as well as consequent disruption. The sizeable and relatively flat approach channel allowed for the construction of a fixed concrete weir that extends upstream from the existing spillway overflow and training walls. This resulted in the design of a trough or a labyrinth type of weir. Ultimately, the geometry of the site and hydraulic analysis led to the duckbill-shape spillway of the final design. The new sill is a reinforced concrete cantilever structure some 4.9 metres tall in places, which is unusual for hydraulic structures of this type as these are normally selfstable by their mass. To enhance the stability, the structure is provided with rockfill on the upstream side of the wall footing, in addition