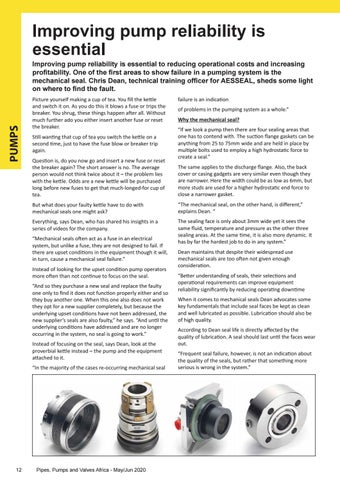 Improving pump reliability is essential to reducing operational costs and increasing profitability. One of the first areas to show failure in a pumping system is the mechanical seal. Chris Dean, technical training officer for AESSEAL, sheds some light on where to find the fault. Picture yourself making a cup of tea. You fill the kettle and switch it on. As you do this it blows a fuse or trips the breaker. You shrug, these things happen after all. Without much further ado you either insert another fuse or reset the breaker. Still wanting that cup of tea you switch the kettle on a second time, just to have the fuse blow or breaker trip again. Question is, do you now go and insert a new fuse or reset the breaker again? The short answer is no. The average person would not think twice about it – the problem lies with the kettle. Odds are a new kettle will be purchased long before new fuses to get that much-longed-for cup of tea.

of problems in the pumping system as a whole.” Why the mechanical seal? “If we look a pump then there are four sealing areas that one has to contend with. The suction flange gaskets can be anything from 25 to 75mm wide and are held in place by multiple bolts used to employ a high hydrostatic force to create a seal.” The same applies to the discharge flange. Also, the back cover or casing gadgets are very similar even though they are narrower. Here the width could be as low as 6mm, but more studs are used for a higher hydrostatic end force to close a narrower gasket.

But what does your faulty kettle have to do with mechanical seals one might ask?

“The mechanical seal, on the other hand, is different,” explains Dean. “

Everything, says Dean, who has shared his insights in a series of videos for the company.

The sealing face is only about 3mm wide yet it sees the same fluid, temperature and pressure as the other three sealing areas. At the same time, it is also more dynamic. It has by far the hardest job to do in any system.”

“Mechanical seals often act as a fuse in an electrical system, but unlike a fuse, they are not designed to fail. If there are upset conditions in the equipment though it will, in turn, cause a mechanical seal failure.” Instead of looking for the upset condition pump operators more often than not continue to focus on the seal. “And so they purchase a new seal and replace the faulty one only to find it does not function properly either and so they buy another one. When this one also does not work they opt for a new supplier completely, but because the underlying upset conditions have not been addressed, the new supplier’s seals are also faulty,” he says. “And until the underlying conditions have addressed and are no longer occurring in the system, no seal is going to work.” Instead of focusing on the seal, says Dean, look at the proverbial kettle instead – the pump and the equipment attached to it. “In the majority of the cases re-occurring mechanical seal

failure is an indication

Dean maintains that despite their widespread use mechanical seals are too often not given enough consideration. “Better understanding of seals, their selections and operational requirements can improve equipment reliability significantly by reducing operating downtime When it comes to mechanical seals Dean advocates some key fundamentals that include seal faces be kept as clean and well lubricated as possible. Lubrication should also be of high quality. According to Dean seal life is directly affected by the quality of lubrication. A seal should last until the faces wear out. “Frequent seal failure, however, is not an indication about the quality of the seals, but rather that something more serious is wrong in the system.”