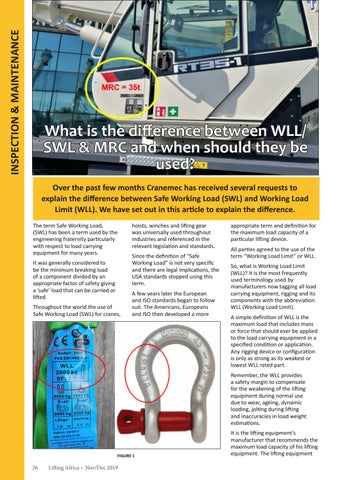 hoists, winches and lifting gear was universally used throughout industries and referenced in the relevant legislation and standards. Since the definition of “Safe Working Load” is not very specific and there are legal implications, the USA standards stopped using this term. A few years later the European and ISO standards began to follow suit. The Americans, Europeans and ISO then developed a more

appropriate term and definition for the maximum load capacity of a particular lifting device. All parties agreed to the use of the term “Working Load Limit” or WLL. So, what is Working Load Limit (WLL)? It is the most frequently used terminology used by manufacturers now tagging all load carrying equipment, rigging and its components with the abbreviation WLL (Working Load Limit). A simple definition of WLL is the maximum load that includes mass or force that should ever be applied to the load carrying equipment in a specified condition or application. Any rigging device or configuration is only as strong as its weakest or lowest WLL rated part. Remember, the WLL provides a safety margin to compensate for the weakening of the lifting equipment during normal use due to wear, ageing, dynamic loading, jolting during lifting and inaccuracies in load weight estimations.

The Lifting Africa Publication Nov-Dec 2019 Issue with Phakamisa on the cover.

The Lifting Africa Publication Nov-Dec 2019 Issue with Phakamisa on the cover.