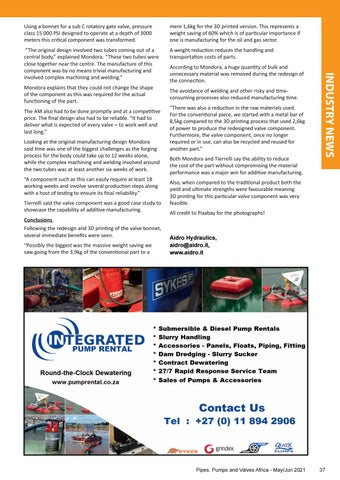 mere 1,6kg for the 3D printed version. This represents a weight saving of 60% which is of particular importance if one is manufacturing for the oil and gas sector.

“The original design involved two tubes coming out of a central body,” explained Mondora. “These two tubes were close together near the centre. The manufacture of this component was by no means trivial manufacturing and involved complex machining and welding.”

A weight reduction reduces the handling and transportation costs of parts.

Mondora explains that they could not change the shape of the component as this was required for the actual functioning of the part. The AM also had to be done promptly and at a competitive price. The final design also had to be reliable. “It had to deliver what is expected of every valve – to work well and last long.” Looking at the original manufacturing design Mondora said time was one of the biggest challenges as the forging process for the body could take up to 12 weeks alone, while the complex machining and welding involved around the two tubes was at least another six weeks of work. “A component such as this can easily require at least 18 working weeks and involve several production steps along with a host of testing to ensure its final reliability.” Tierrelli said the valve component was a good case study to showcase the capability of additive manufacturing. Conclusions Following the redesign and 3D printing of the valve bonnet, several immediate benefits were seen. “Possibly the biggest was the massive weight saving we saw going from the 3,9kg of the conventional part to a

According to Mondora, a huge quantity of bulk and unnecessary material was removed during the redesign of the connection. The avoidance of welding and other risky and timeconsuming processes also reduced manufacturing time. “There was also a reduction in the raw materials used. For the conventional piece, we started with a metal bar of 8,5kg compared to the 3D printing process that used 2,6kg of power to produce the redesigned valve component. Furthermore, the valve component, once no longer required or in use, can also be recycled and reused for another part.” Both Mondora and Tierrelli say the ability to reduce the cost of the part without compromising the material performance was a major win for additive manufacturing.

Using a bonnet for a sub C rotatory gate valve, pressure class 15 000 PSI designed to operate at a depth of 3000 meters this critical component was transformed.

Also, when compared to the traditional product both the yield and ultimate strengths were favourable meaning 3D printing for this particular valve component was very feasible. All credit to Pixabay for the photographs!