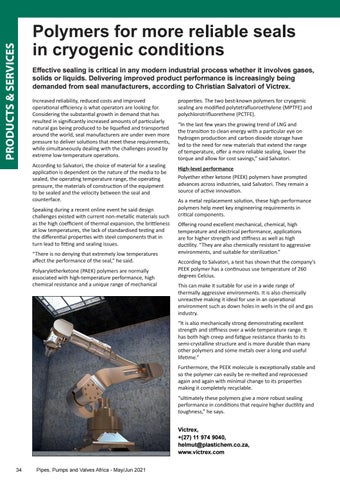 Polymers for more reliable seals in cryogenic conditions Effective sealing is critical in any modern industrial process whether it involves gases, solids or liquids. Delivering improved product performance is increasingly being demanded from seal manufacturers, according to Christian Salvatori of Victrex. Increased reliability, reduced costs and improved operational efficiency is what operators are looking for. Considering the substantial growth in demand that has resulted in significantly increased amounts of particularly natural gas being produced to be liquefied and transported around the world, seal manufacturers are under even more pressure to deliver solutions that meet these requirements, while simultaneously dealing with the challenges posed by extreme low-temperature operations. According to Salvatori, the choice of material for a sealing application is dependent on the nature of the media to be sealed, the operating temperature range, the operating pressure, the materials of construction of the equipment to be sealed and the velocity between the seal and counterface. Speaking during a recent online event he said design challenges existed with current non-metallic materials such as the high coefficient of thermal expansion, the brittleness at low temperatures, the lack of standardised testing and the differential properties with steel components that in turn lead to fitting and sealing issues. “There is no denying that extremely low temperatures affect the performance of the seal,” he said. Polyaryletherketone (PAEK) polymers are normally associated with high-temperature performance, high chemical resistance and a unique range of mechanical

properties. The two best-known polymers for cryogenic sealing are modified polytetrafluoroethylene (MPTFE) and polychlorotrifluorethene (PCTFE). “In the last few years the growing trend of LNG and the transition to clean energy with a particular eye on hydrogen production and carbon dioxide storage have led to the need for new materials that extend the range of temperature, offer a more reliable sealing, lower the torque and allow for cost savings,” said Salvatori. High-level performance Polyether ether ketone (PEEK) polymers have prompted advances across industries, said Salvatori. They remain a source of active innovation. As a metal replacement solution, these high-performance polymers help meet key engineering requirements in critical components. Offering round excellent mechanical, chemical, high temperature and electrical performance, applications are for higher strength and stiffness as well as high ductility. “They are also chemically resistant to aggressive environments, and suitable for sterilization.” According to Salvatori, a test has shown that the company’s PEEK polymer has a continuous use temperature of 260 degrees Celcius. This can make it suitable for use in a wide range of thermally aggressive environments. It is also chemically unreactive making it ideal for use in an operational environment such as down holes in wells in the oil and gas industry. “It is also mechanically strong demonstrating excellent strength and stiffness over a wide temperature range. It has both high creep and fatigue resistance thanks to its semi-crystalline structure and is more durable than many other polymers and some metals over a long and useful lifetime.” Furthermore, the PEEK molecule is exceptionally stable and so the polymer can easily be re-melted and reprocessed again and again with minimal change to its properties making it completely recyclable. “ultimately these polymers give a more robust sealing performance in conditions that require higher ductility and toughness,” he says. Victrex, +(27) 11 974 9040, helmut@plastichem.co.za, www.victrex.com