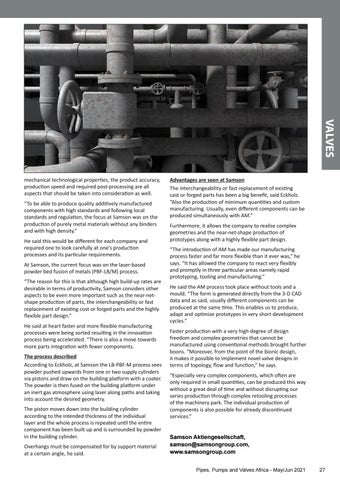 mechanical technological properties, the product accuracy, production speed and required post-processing are all aspects that should be taken into consideration as well. “To be able to produce quality additively manufactured components with high standards and following local standards and regulation, the focus at Samson was on the production of purely metal materials without any binders and with high density.” He said this would be different for each company and required one to look carefully at one’s production processes and its particular requirements. At Samson, the current focus was on the laser-based powder bed fusion of metals (PBF-LB/M) process. “The reason for this is that although high build-up rates are desirable in terms of productivity, Samson considers other aspects to be even more important such as the near-netshape production of parts, the interchangeability or fast replacement of existing cost or forged parts and the highly flexible part design.” He said at heart faster and more flexible manufacturing processes were being sorted resulting in the innovation process being accelerated. “There is also a move towards more parts integration with fewer components. The process described According to Eckholz, at Samson the LB-PBF-M process sees powder pushed upwards from one or two supply cylinders via pistons and draw on the building platform with a coater. The powder is then fused on the building platform under an inert gas atmosphere using laser along paths and taking into account the desired geometry. The piston moves down into the building cylinder according to the intended thickness of the individual layer and the whole process is repeated until the entire component has been built up and is surrounded by powder in the building cylinder. Overhangs must be compensated for by support material at a certain angle, he said.

Advantages are seen at Samson The interchangeability or fast replacement of existing cast or forged parts has been a big benefit, said Eckholz. “Also the production of minimum quantities and custom manufacturing. Usually, even different components can be produced simultaneously with AM.” Furthermore, it allows the company to realise complex geometries and the near-net-shape production of prototypes along with a highly flexible part design. “The introduction of AM has made our manufacturing process faster and far more flexible than it ever was,” he says. “It has allowed the company to react very flexibly and promptly in three particular areas namely rapid prototyping, tooling and manufacturing.” He said the AM process took place without tools and a mould. “The form is generated directly from the 3-D CAD data and as said, usually different components can be produced at the same time. This enables us to produce, adapt and optimize prototypes in very short development cycles.” Faster production with a very high degree of design freedom and complex geometries that cannot be manufactured using conventional methods brought further boons. “Moreover, from the point of the bionic design, it makes it possible to implement novel valve designs in terms of topology, flow and function,” he says. “Especially very complex components, which often are only required in small quantities, can be produced this way without a great deal of time and without disrupting our series production through complex retooling processes of the machinery park. The individual production of components is also possible for already discontinued services.” Samson Aktiengesellschaft, samson@samsongroup.com, www.samsongroup.com Pipes, Pumps and Valves Africa - May/Jun 2021