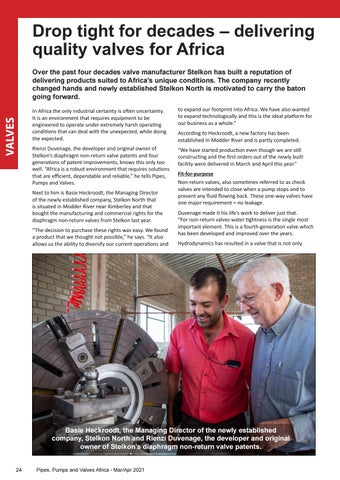 Over the past four decades valve manufacturer Stelkon has built a reputation of delivering products suited to Africa’s unique conditions. The company recently changed hands and newly established Stelkon North is motivated to carry the baton going forward. In Africa the only industrial certainty is often uncertainty. It is an environment that requires equipment to be engineered to operate under extremely harsh operating conditions that can deal with the unexpected, while doing the expected.

to expand our footprint into Africa. We have also wanted to expand technologically and this is the ideal platform for our business as a whole.”

Rienzi Duvenage, the developer and original owner of Stelkon’s diaphragm non-return valve patents and four generations of patent improvements, knows this only too well. “Africa is a robust environment that requires solutions that are efficient, dependable and reliable,” he tells Pipes, Pumps and Valves.

“We have started production even though we are still constructing and the first orders out of the newly built facility were delivered in March and April this year.”

Next to him is Basie Heckroodt, the Managing Director of the newly established company, Stelkon North that is situated in Modder River near Kimberley and that bought the manufacturing and commercial rights for the diaphragm non-return valves from Stelkon last year. “The decision to purchase these rights was easy. We found a product that we thought not possible,” he says. “It also allows us the ability to diversify our current operations and

According to Heckroodt, a new factory has been established in Modder River and is partly completed.

Fit-for-purpose Non-return valves, also sometimes referred to as check valves are intended to close when a pump stops and to prevent any fluid flowing back. These one-way valves have one major requirement – no leakage. Duvenage made it his life’s work to deliver just that. “For non-return valves water tightness is the single most important element. This is a fourth-generation valve which has been developed and improved over the years. Hydrodynamics has resulted in a valve that is not only