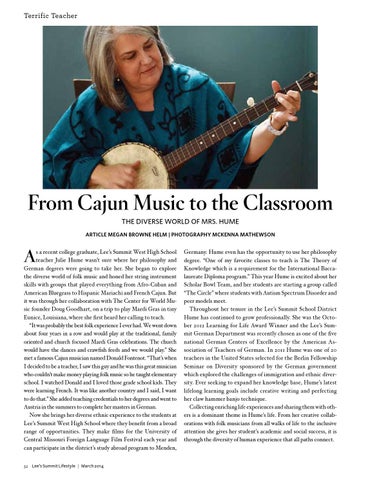 s a recent college graduate, Lee’s Summit West High School teacher Julie Hume wasn’t sure where her philosophy and German degrees were going to take her. She began to explore the diverse world of folk music and honed her string instrument skills with groups that played everything from Afro-Cuban and American Bluegrass to Hispanic Mariachi and French Cajun. But it was through her collaboration with The Center for World Music founder Doug Goodhart, on a trip to play Mardi Gras in tiny Eunice, Louisiana, where she first heard her calling to teach. “It was probably the best folk experience I ever had. We went down about four years in a row and would play at the traditional, family oriented and church focused Mardi Gras celebrations. The church would have the dances and crawfish feeds and we would play.” She met a famous Cajun musician named Donald Fontenot. “That’s when I decided to be a teacher, I saw this guy and he was this great musician who couldn’t make money playing folk music so he taught elementary school. I watched Donald and I loved those grade school kids. They were learning French. It was like another country and I said, I want to do that.” She added teaching credentials to her degrees and went to Austria in the summers to complete her masters in German. Now she brings her diverse ethnic experience to the students at Lee’s Summit West High School where they benefit from a broad range of opportunities. They make films for the University of Central Missouri Foreign Language Film Festival each year and can participate in the district’s study abroad program to Menden, 32 Lee’s Summit Lifestyle | March 2014

Germany. Hume even has the opportunity to use her philosophy degree. “One of my favorite classes to teach is The Theory of Knowledge which is a requirement for the International Baccalaureate Diploma program.” This year Hume is excited about her Scholar Bowl Team, and her students are starting a group called “The Circle” where students with Autism Spectrum Disorder and peer models meet. Throughout her tenure in the Lee’s Summit School District Hume has continued to grow professionally. She was the October 2012 Learning for Life Award Winner and the Lee’s Summit German Department was recently chosen as one of the five national German Centers of Excellence by the American Association of Teachers of German. In 2011 Hume was one of 20 teachers in the United States selected for the Berlin Fellowship Seminar on Diversity sponsored by the German government which explored the challenges of immigration and ethnic diversity. Ever seeking to expand her knowledge base, Hume’s latest lifelong learning goals include creative writing and perfecting her claw hammer banjo technique. Collecting enriching life experiences and sharing them with others is a dominant theme in Hume’s life. From her creative collaborations with folk musicians from all walks of life to the inclusive attention she gives her student’s academic and social success, it is through the diversity of human experience that all paths connect.