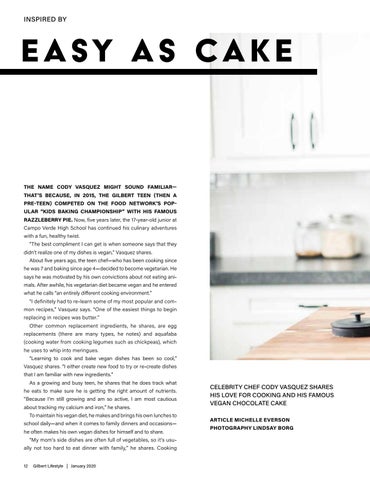 THE NAME CODY VASQUEZ MIGHT SOUND FAMILIAR— THAT’S BECAUSE, IN 2015, THE GILBERT TEEN (THEN A PRE-TEEN) COMPETED ON THE FOOD NETWORK’S POPULAR “KIDS BAKING CHAMPIONSHIP” WITH HIS FAMOUS RAZZLEBERRY PIE. Now, five years later, the 17-year-old junior at Campo Verde High School has continued his culinary adventures with a fun, healthy twist. “The best compliment I can get is when someone says that they didn’t realize one of my dishes is vegan,” Vasquez shares. About five years ago, the teen chef—who has been cooking since he was 7 and baking since age 4—decided to become vegetarian. He says he was motivated by his own convictions about not eating animals. After awhile, his vegetarian diet became vegan and he entered what he calls “an entirely different cooking environment.” “I definitely had to re-learn some of my most popular and common recipes,” Vasquez says. “One of the easiest things to begin replacing in recipes was butter.” Other common replacement ingredients, he shares, are egg replacements (there are many types, he notes) and aquafaba (cooking water from cooking legumes such as chickpeas), which he uses to whip into meringues.  “Learning to cook and bake vegan dishes has been so cool,” Vasquez shares. “I either create new food to try or re-create dishes that I am familiar with new ingredients.” As a growing and busy teen, he shares that he does track what he eats to make sure he is getting the right amount of nutrients. “Because I’m still growing and am so active, I am most cautious about tracking my calcium and iron,” he shares.  To maintain his vegan diet, he makes and brings his own lunches to school daily—and when it comes to family dinners and occasions— he often makes his own vegan dishes for himself and to share.  “My mom’s side dishes are often full of vegetables, so it’s usually not too hard to eat dinner with family,” he shares. Cooking 12