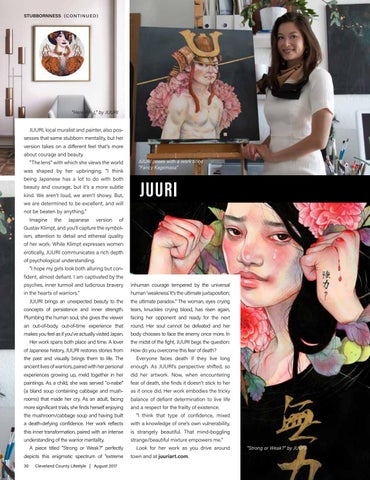 JUURI, local muralist and painter, also possesses that same stubborn mentality, but her version takes on a different feel that’s more about courage and beauty. "The lens" with which she views the world was shaped by her upbringing. "I think being Japanese has a lot to do with both beauty and courage, but it’s a more subtle kind. We aren’t loud, we aren’t showy. But, we are determined to be excellent, and will

not be beaten by anything." Imagine

Gustav Klimpt, and you'll capture the symbolism, attention to detail and ethereal quality of her work. While Klimpt expresses women erotically, JUURI communicates a rich depth of psychological understanding. "I hope my girls look both alluring but confident, almost defiant. I am captivated by the psyches, inner turmoil and ludicrous bravery

inhuman courage tempered by the universal

in the hearts of warriors."

human ‘weakness’. It's the ultimate juxtaposition;

JUURI brings an unexpected beauty to the

concepts of persistence and inner strength.

Plumbing the human soul, she gives the viewer

facing her opponent and ready for the next

an out-of-body, out-of-time experience that

round. Her soul cannot be defeated and her

makes you feel as if you've actually visited Japan.

body chooses to face the enemy once more. In

Her work spans both place and time. A lover

the midst of the fight, JUURI begs the question:

How do you overcome this fear of death?

the past and visually brings them to life. The

Everyone faces death if they live long

ancient lives of warriors, paired with her personal

enough. As JUURI's perspective shifted, so

experiences growing up, meld together in her

did her artwork. Now, when encountering

paintings. As a child, she was served "o-nabe"

fear of death, she finds it doesn't stick to her

as it once did. Her work embodies the tricky

rooms) that made her cry. As an adult, facing

and a respect for the frailty of existence.

the mushroom/cabbage soup and having built

"I think that type of confidence, mixed

a death-defying confidence. Her work reflects

with a knowledge of one’s own vulnerability,

this inner transformation, paired with an intense

is strangely beautiful. That mind-boggling

understanding of the warrior mentality.

A piece titled "Strong or Weak?" perfectly depicts this enigmatic spectrum of "extreme 30

Look for her work as you drive around town and at juuriart.com.

"Strong or Weak?" by JUURI