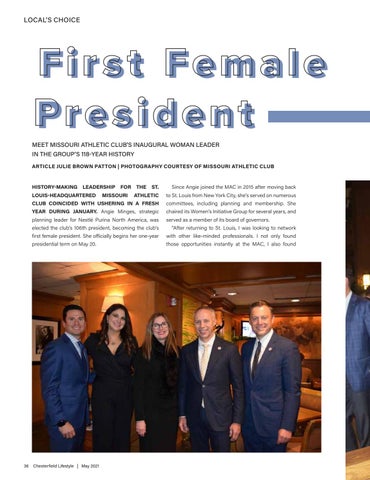 HISTORY-MAKING LEADERSHIP FOR THE ST. LOUIS-HEADQUARTERED

Since Angie joined the MAC in 2015 after moving back

CLUB COINCIDED WITH USHERING IN A FRESH

committees, including planning and membership. She

chaired its Women’s Initiative Group for several years, and

served as a member of its board of governors.

“After returning to St. Louis, I was looking to network

with other like-minded professionals. I not only found

presidential term on May 20.

those opportunities instantly at the MAC, I also found

May 2021 Issue of Chesterfield Lifestyle

May 2021 Issue of Chesterfield Lifestyle