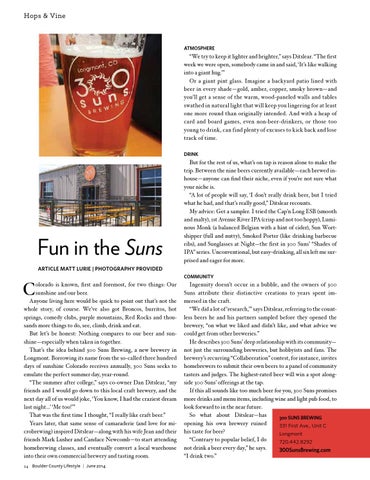 “We try to keep it lighter and brighter,” says Ditslear. “The first week we were open, somebody came in and said, ‘It’s like walking into a giant hug.’” Or a giant pint glass. Imagine a backyard patio lined with beer in every shade—gold, amber, copper, smoky brown—and you’ll get a sense of the warm, wood-paneled walls and tables swathed in natural light that will keep you lingering for at least one more round than originally intended. And with a heap of card and board games, even non-beer-drinkers, or those too young to drink, can find plenty of excuses to kick back and lose track of time. DRINK

Fun in the Suns

But for the rest of us, what’s on tap is reason alone to make the trip. Between the nine beers currently available—each brewed inhouse—anyone can find their niche, even if you’re not sure what your niche is. “A lot of people will say, ‘I don’t really drink beer, but I tried what he had, and that’s really good,” Ditslear recounts. My advice: Get a sampler. I tried the Cap’n Long ESB (smooth and malty), 1st Avenue River IPA (crisp and not too hoppy), Luminous Monk (a balanced Belgian with a hint of cider), Sun Wortshipper (full and nutty), Smoked Porter (like drinking barbecue ribs), and Sunglasses at Night—the first in 300 Suns’ “Shades of IPA” series. Unconventional, but easy-drinking, all six left me surprised and eager for more.

olorado is known, first and foremost, for two things: Our sunshine and our beer. Anyone living here would be quick to point out that’s not the whole story, of course. We’ve also got Broncos, burritos, hot springs, comedy clubs, purple mountains, Red Rocks and thousands more things to do, see, climb, drink and eat. But let’s be honest: Nothing compares to our beer and sunshine—especially when taken in together. That’s the idea behind 300 Suns Brewing, a new brewery in Longmont. Borrowing its name from the so-called three hundred days of sunshine Colorado receives annually, 300 Suns seeks to emulate the perfect summer day, year-round. “The summer after college,” says co-owner Dan Ditslear, “my friends and I would go down to this local craft brewery, and the next day all of us would joke, ‘You know, I had the craziest dream last night...’ ‘Me too!’” That was the first time I thought, “I really like craft beer.” Years later, that same sense of camaraderie (and love for microbrewing) inspired Ditslear—along with his wife Jean and their friends Mark Lusher and Candace Newcomb—to start attending homebrewing classes, and eventually convert a local warehouse into their own commercial brewery and tasting room. 24 Boulder County Lifestyle | June 2014

Ingenuity doesn’t occur in a bubble, and the owners of 300 Suns attribute their distinctive creations to years spent immersed in the craft. “We did a lot of ‘research,’” says Ditslear, referring to the countless beers he and his partners sampled before they opened the brewery, “on what we liked and didn’t like, and what advice we could get from other breweries.” He describes 300 Suns’ deep relationship with its community— not just the surrounding breweries, but hobbyists and fans. The brewery’s recurring “Collabeeration” contest, for instance, invites homebrewers to submit their own beers to a panel of community tasters and judges. The highest-rated beer will win a spot alongside 300 Suns’ offerings at the tap. If this all sounds like too much beer for you, 300 Suns promises more drinks and menu items, including wine and light pub food, to look forward to in the near future. So what about Ditslear—has 300 SUNS BREWING opening his own brewery ruined 331 First Ave., Unit C his taste for beer? Longmont “Contrary to popular belief, I do 720.442.8292 not drink a beer every day,” he says. 300SunsBrewing.com “I drink two.”