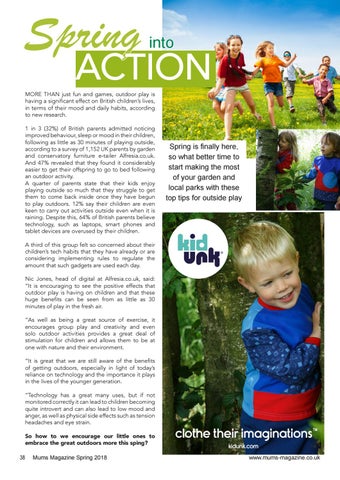 MORE THAN just fun and games, outdoor play is having a significant effect on British children’s lives, in terms of their mood and daily habits, according to new research. 1 in 3 (32%) of British parents admitted noticing improved behaviour, sleep or mood in their children, following as little as 30 minutes of playing outside, according to a survey of 1,152 UK parents by garden and conservatory furniture e-tailer Alfresia.co.uk. And 47% revealed that they found it considerably easier to get their offspring to go to bed following an outdoor activity. A quarter of parents state that their kids enjoy playing outside so much that they struggle to get them to come back inside once they have begun to play outdoors. 12% say their children are even keen to carry out activities outside even when it is raining. Despite this, 64% of British parents believe technology, such as laptops, smart phones and tablet devices are overused by their children.

Spring is finally here, so what better time to start making the most of your garden and local parks with these top tips for outside play

A third of this group felt so concerned about their children’s tech habits that they have already or are considering implementing rules to regulate the amount that such gadgets are used each day. Nic Jones, head of digital at Alfresia.co.uk, said: “It is encouraging to see the positive effects that outdoor play is having on children and that these huge benefits can be seen from as little as 30 minutes of play in the fresh air. “As well as being a great source of exercise, it encourages group play and creativity and even solo outdoor activities provides a great deal of stimulation for children and allows them to be at one with nature and their environment. “It is great that we are still aware of the benefits of getting outdoors, especially in light of today’s reliance on technology and the importance it plays in the lives of the younger generation. “Technology has a great many uses, but if not monitored correctly it can lead to children becoming quite introvert and can also lead to low mood and anger, as well as physical side effects such as tension headaches and eye strain. So how to we encourage our little ones to embrace the great outdoors more this sping? 38 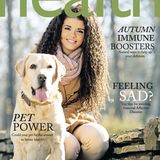