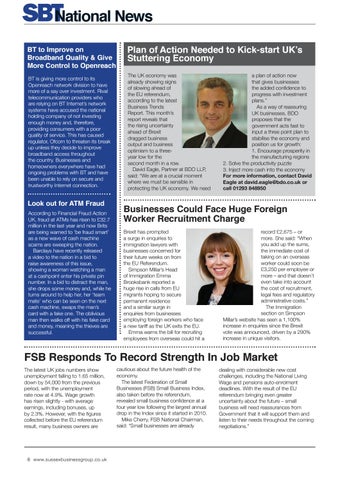 BT is giving more control to its Openreach network division to have more of a say over investment. Rival telecommunication providers who are relying on BT Internet’s network systems have accused the national holding company of not investing enough money and, therefore, providing consumers with a poor quality of service. This has caused regulator, Ofcom to threaten its break up unless they decide to improve broadband access throughout the country. Businesses and homeowners everywhere have had ongoing problems with BT and have been unable to rely on secure and trustworthy Internet connection.

The UK economy was already showing signs of slowing ahead of the EU referendum, according to the latest Business Trends Report. This month’s report reveals that the rising uncertainty ahead of Brexit dragged business output and business optimism to a threeyear low for the second month in a row. David Eagle, Partner at BDO LLP, said: “We are at a crucial moment where we must be sensible in protecting the UK economy. We need

Look out for ATM Fraud

According to Financial Fraud Action UK, fraud at ATMs has risen to £32.7 million in the last year and now Brits are being warned to ‘be fraud smart’ as a new wave of cash machine scams are sweeping the nation. Barclays have recently released a video to the nation in a bid to raise awareness of this issue, showing a woman watching a man at a cashpoint enter his private pin number. In a bid to distract the man, she drops some money and, while he turns around to help her, her ‘team mate’ who can be seen on the next cash machine, swaps the man’s card with a fake one. The oblivious man then walks off with his fake card and money, meaning the thieves are successful.

a plan of action now that gives businesses the added confidence to progress with investment plans.” As a way of reassuring UK businesses, BDO proposes that the government acts fast to input a three point plan to stabilise the economy and position us for growth: 1. Encourage prosperity in the manufacturing regions 2. Solve the productivity puzzle 3. Inject more cash into the economy For more information, contact David Eagle at david.eagle@bdo.co.uk or call 01293 848950

Businesses Could Face Huge Foreign Worker Recruitment Charge Brexit has prompted a surge in enquiries to immigration lawyers with businesses concerned for their future weeks on from the EU Referendum. Simpson Millar’s Head of Immigration Emma Brooksbank reported a huge rise in calls from EU migrants hoping to secure permanent residence and a similar surge in enquiries from businesses employing foreign workers who face a new tariff as the UK exits the EU. Emma warns the bill for recruiting employees from overseas could hit a

record £2,675 – or more. She said: “When you add up the sums, the immediate cost of taking on an overseas worker could soon be £3,250 per employee or more – and that doesn’t even take into account the cost of recruitment, legal fees and regulatory administrative costs.” The Immigration section on Simpson Millar’s website has seen a 1,100% increase in enquiries since the Brexit vote was announced, driven by a 290% increase in unique visitors.

FSB Responds To Record Strength In Job Market The latest UK jobs numbers show unemployment falling to 1.65 million, down by 54,000 from the previous period, with the unemployment rate now at 4.9%. Wage growth has risen slightly - with average earnings, including bonuses, up by 2.3%. However, with the figures collected before the EU referendum result, many business owners are

cautious about the future health of the economy. The latest Federation of Small Businesses (FSB) Small Business Index, also taken before the referendum, revealed small business confidence at a four year low following the largest annual drop in the Index since it started in 2010. Mike Cherry, FSB National Chairman, said: “Small businesses are already

dealing with considerable new cost challenges, including the National Living Wage and pensions auto-enrolment deadlines. With the result of the EU referendum bringing even greater uncertainty about the future – small business will need reassurances from Government that it will support them and listen to their needs throughout the coming negotiations.” 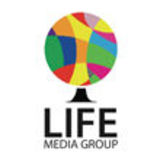