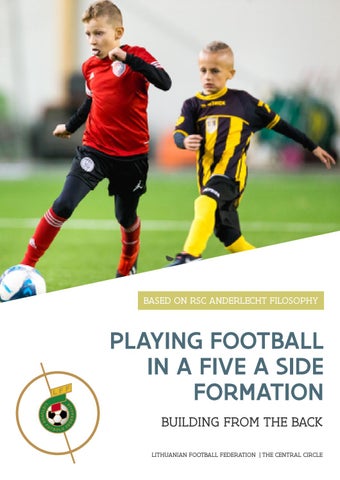 BASED ON RSC ANDERLECHT FILOSOPHY

CONTENT A. THE GAME INTENT “BUILDING FROM THE BACK”

1. Why building from the back?

2. Game purpose when building from the back

B. THE TECHNICAL – TACTICAL ELEMENT

D. THE EVALUATION OF THE GAME INTENT

A. THE GAME INTENT “BUILDING FROM THE BACK” 1. WHY BUILDING FROM THE BACK? Building up is the preparation for the attack: the players try to get the ball to the front in a targeted and efficient way. Building up backwards is situated on one's own half and around the centre circle. The aim of the construction is to find the free man by playing the ball in and around and to find depth in the game. The main protagonists in the construction are: 1. 2.

2. GAME PURPOSE WHEN BUILDING FROM THE BACK Game intentions in the construction:  Finding the free man by playing the ball and playing the ball around.  First option is to play deep, but given the age this is the least achievable if you want to do it in a good way. Via:  Good positional play  Fast ball circulation

The “building from the back” can be divided into 2 situations: 1.

B. THE TECHNICAL – TACTICAL ELEMENT 1. LEARNING THE GAME INTENT The insightful aspect in this age group (5<>5) is hardly developed or not developed. The development that will be necessary to play football in a double diamond formation and play from the back is not present. For this reason, we talk – for this age - about "learning a game intention".

In a 5<>5 formation, the quality and the way in which the game is built up strongly (and mainly) depends on the individual qualities of our goalkeeper and of our central defender. Unfortunately, the 'directions' of the youth coach are often an obstacle to get a well-played build up from the back. The all-important condition for a daring build-up from behind is that the coach creates a climate in which mistakes can be made.

2. THE TECHNICAL – TACTICAL WORKING POINTS 2.1 General The starting point for building from the back (from the goalkeeper) is a fast execution and a fast build up. We do not let the opponent get into the organisation. The goalkeeper and central defender in possession of the ball quickly make the right choice when building up. When anticipating and executing quickly, it will be important that the player concerned can read the game quickly and can anticipate the game situation appropriately. If we do not allow the opponent to fall back in the organisation, there is always a chance to play. It is important to see this possibility to play quickly and to quickly respond to this free opportunity to play.

We do not develop "playstation" footballers. We do not introduce a fixed system. A fixed system is often transparent to the opponent and a one-sided system restricts the development margin of our footballers. Much depends on the game situation itself! In addition, we stimulate the creativity of our players by allowing them to anticipate the game situation that presents itself.

2.2 The technical – tactical working points for the goalkeeper 2.2.1 When playing the ball -

Compare the playing side where players compete for the ball with a very busy intersection or a very busy highway. Once in possession of the ball, ask our goalkeeper (or the players under the ball) not to get stuck in a traffic jam, but to choose to build up via the "fastest and safest way" to the other goal.

2.3 The technical – tactical working points for the defenders 2.3.1 When running free (playability) -

It is necessary that the freeing of the defenders is done with the right attitude. A short acceleration in the direction of the open space and the appropriate disconnection are necessary to be able to shake off the attacker off the other team. The moment when the defenders present themselves to the goalkeeper must - as has been said - be well-considered. The ball can only be played by the goalkeeper when the ball is playable.

The passing of the ball o The defender is turned in at reception, so that he has a view of the entire playing field (other players and opponents). o On reception, the ball must be ready for play immediately; the ball must not be controlled or stopped under the body.

After the ball has been controlled, the ball must be played in a forward direction with technical care (ball speed and accuracy).

2.4 The technical – tactical working points for the players standing for the ball The actual room to play is kept as large as possible in the depth, so that there is more room for loosening up.

3. THE DIFFERENT GAME SITUATIONS 3.1 Ball is loose and with goalkeeper

The goalkeeper dribbles the ball into the field and plays out a 2 against 1 situation together with the (3), who runs free from the opposition. It is important that the goalkeeper plays the ball at the right time to the (3). Ideally, the (9) of the opposing team is immediately ‘eliminated’ because of the passing of the goalkeeper to the (3).

3.2 Ball is fixed with goalkeeper (kick in via goalkeeper)

3.2.1 Build up via (3) (3) slides out diagonally to the left or to the right. The movement must be done explosively and the goalkeeper must be able to respond quickly. Of course, it is very important that the (3) takes the ball turned in and quickly looks for a game continuation so that the (9) of the other side cannot anticipate. After the explosive release of the (3), the (7) or (11) anticipate with a running action in the depth so that there is more room.

(1) It is important that the running action of (3) is not too low! This is a situation that is currently too common.

In this situation, the goalkeeper plays a lateral and non-functional ball at (3), who is at the same level of the field. There is no depth and the situation becomes even more difficult.

(2) It is important that the running action of (3) is not too wide! This is a situation that is currently also too common.

In this situation, (3) chooses a position too close to the touchline. This makes a good continuation difficult. Usually at this position a deep straight ball on the winger is chosen (on drawing this would mean a pass towards (7)). The wings (7) and (11) become "fixed" (on one hand with the limitation of the sideline and on the other hand with a player of the other side close by). If (3) does move too far towards the touchline, a running action of (7) or (11) - depending on the situation - inward can be a solution. This running action immediately creates two new game options (in the drawing below for 7 and 9).

The goalkeeper preferably chooses the option to play the ball to (9). The mutual cooperation between (3) and (9) is very important. (9) should adjust his position according to the position of (3). If (3) runs to the left, (9) should go to the right. In addition, it is very important for (9) to choose a high position and to maintain depth, making it easier to receive a ball. In this story, timing is very important. Coaching each other ("play") is also important!

"Open - to foot": when building up via (7) or (11), it is important that these wings keep the playing field wide (to make room for 3 and 9). Keeping it wide is therefore a first point of attention! (7) and (11) have to choose as high a position as possible in the second instance and thus create space for themselves. 7 makes a typical pre-action in the above drawing (first phase: choose high position and then dive back into the created space) in order to get the ball to the foot. Just before the assumption, (7) ideally looks over his shoulder and becomes aware of the position of his direct opponent. It is important that (7) is turned in and is able to play directly forward with an orientated control. We 7 | Page

often see the pre-action, deep (first phase) and back (second phase), but often the third phase of the pre-action is forgotten, ... and that is again a deep running action. In the drawing you can see (11) go up (first phase), then go down into the free space, but the direct pass line of the goalkeeper to (11) is cut off by the position of the opponent. As a result, the third phase of the pre-action starts with another deep running action (usually the direct opponent can be played out).

2. Central defender (3) When offering ✓ "Dare ✓ "Do the running action with conviction, move up and drop out if necessary. ✓ "Make sure you know the position of the attackers and coach your teammates. When controlling and taking the ball with you ✓ "Use both feet ✓ "Keep your head up ✓ "Keep defending in mind When playing the ball to a teammate ✓ "Look and play deep. ✓ "Keep calm ✓ "Immediately move up after playing deep, keep the distances short," and adjust your position immediately. ✓ "Stay available. In case of individual elimination of the direct opponent ✓ 'Dare to go over your direct opponent if the situation lends itself to it'. ✓ "Keep possession of the ball 8 | Page

D. THE EVALUATION OF THE GAME INTENT

During and after the game, coaches and players check whether the game intention that was practiced during training was translated into the game in a convincing way. We ask ourselves the following 5 questions: 1. 2. 3. 4. 5.

Do the defenders run convincingly free in relation to the goalkeeper in possession of the ball and are the defenders (central defender!) oriented in the right direction when receiving the ball? Do the players pay attention to controlling and taking the ball? Is the playing of the ball taken care of? Is the goalkeeper available to receive the ball again after the first entry? Is there sufficient depth in the build-up? 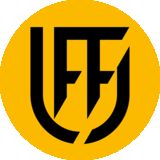 The Central Circle: Playing football in a five-a-side formation. Building from the back

The Central Circle: Playing football in a five-a-side formation. Building from the back