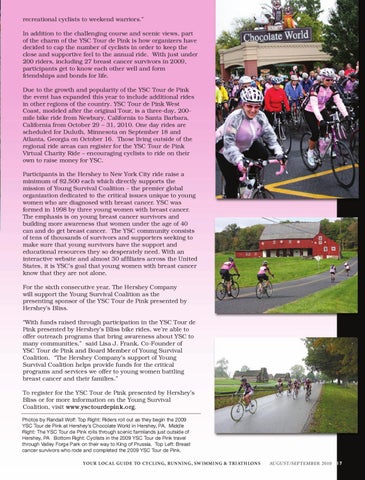 recreational cyclists to weekend warriors.” In addition to the challenging course and scenic views, part of the charm of the YSC Tour de Pink is how organizers have decided to cap the number of cyclists in order to keep the close and supportive feel to the annual ride. With just under 200 riders, including 27 breast cancer survivors in 2009, participants get to know each other well and form friendships and bonds for life. Due to the growth and popularity of the YSC Tour de Pink the event has expanded this year to include additional rides in other regions of the country. YSC Tour de Pink West Coast, modeled after the original Tour, is a three-day, 200mile bike ride from Newbury, California to Santa Barbara, California from October 29 – 31, 2010. One day rides are scheduled for Duluth, Minnesota on September 18 and Atlanta, Georgia on October 16. Those living outside of the regional ride areas can register for the YSC Tour de Pink Virtual Charity Ride – encouraging cyclists to ride on their own to raise money for YSC. Participants in the Hershey to New York City ride raise a minimum of $2,500 each which directly supports the mission of Young Survival Coalition – the premier global organization dedicated to the critical issues unique to young women who are diagnosed with breast cancer. YSC was formed in 1998 by three young women with breast cancer. The emphasis is on young breast cancer survivors and building more awareness that women under the age of 40 can and do get breast cancer. The YSC community consists of tens of thousands of survivors and supporters seeking to make sure that young survivors have the support and educational resources they so desperately need. With an interactive website and almost 30 affiliates across the United States, it is YSC’s goal that young women with breast cancer know that they are not alone. For the sixth consecutive year, The Hershey Company will support the Young Survival Coalition as the presenting sponsor of the YSC Tour de Pink presented by Hershey’s Bliss. “With funds raised through participation in the YSC Tour de Pink presented by Hershey’s Bliss bike rides, we’re able to offer outreach programs that bring awareness about YSC to many communities,” said Lisa J. Frank, Co-Founder of YSC Tour de Pink and Board Member of Young Survival Coalition. “The Hershey Company’s support of Young Survival Coalition helps provide funds for the critical programs and services we offer to young women battling breast cancer and their families.” To register for the YSC Tour de Pink presented by Hershey’s Bliss or for more information on the Young Survival Coalition, visit www.ysctourdepink.org. Photos by Randall Wolf: Top Right: Riders roll out as they begin the 2009 YSC Tour de Pink at Hershey’s Chocolate World in Hershey, PA. Middle Right: The YSC Tour de Pink rolls through scenic farmlands just outside of Hershey, PA Bottom Right: Cyclists in the 2009 YSC Tour de Pink travel through Valley Forge Park on their way to King of Prussia. Top Left: Breast cancer survivors who rode and completed the 2009 YSC Tour de Pink. YOUR LOCAL GUIDE TO CYCLING, RUNNING, SWIMMING & TRIATHLONS 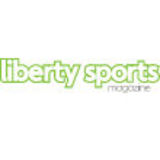