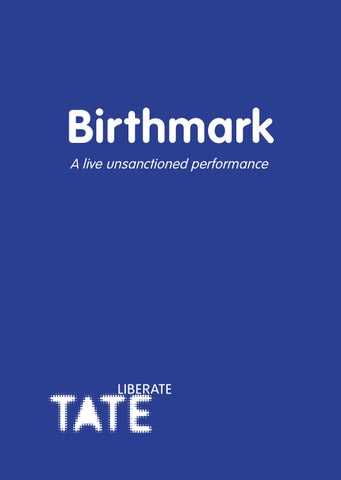 Birthmark BP Walk through British Art 1840s gallery Created, performed, written, designed and curated by Liberate Tate This performance is made possible by the dedication and hard work of over 500 members of the Liberate Tate art collective, which is part of the Art Not Oil coalition. All time is volunteered and all costs are funded through collective earnings by way of performance lectures, writing commissions, and art print sales. Liberate Tate exists to free Tate from BP, performing unsanctioned live art in Tate spaces to eject BP as sponsor from the gallery. The harm BP is responsible for is made possible by Tateâ&#x20AC;&#x2122;s association with the company. BP is the third largest emitter of carbon dioxide in the world, and is responsible for countless environmental and social catastrophes including the Deepwater Horizon disaster, human rights abuses in Colombia and controversy over Indigenous peopleâ&#x20AC;&#x2122;s land rights in Canada. Tateâ&#x20AC;&#x2122;s association provides BP with the social licence it desperately needs to continue its harmful operations. Photography is encouraged during this performance. #Birthmark www.liberatetate.org.uk facebook.com/liberatetate @liberatetate

Skin, needles, ink, rotary machine, latex, plastic, bodies, trauma Climate change is permanent; so are tattoos. This piece explores lasting damage, scarring, and healing. Numbers are written on the body, brands are written on the gallery and, as carbon is released into the atmosphere, damage is written on the planet. This is an unsanctioned performance by Liberate Tate in defiance of BP’s sponsorship of Tate. The performers receive tattoos in the form of a number – the amount of carbon dioxide in the atmosphere expressed as parts per million (ppm), in the year of their birth. A performer born in 1962 (318ppm) compares the changes they’ve seen with a performer born in 1993 (357ppm). Being born in the same year has a new meaning – living through the same increase in carbon dioxide. In response to climate change, this performance embodies the revisions being inscribed on our planet in an intimate, personal way. Each tattoo echoes the engraving act by the oil sponsor in transforming the body of the gallery. There is a rich history of tattoos in art and protest, but protest tattoos as performance intervention in a gallery space is unprecedented. In the run up to the international climate talks in Paris, the artists invite Tate to reconsider their sponsorship deal with BP, and to begin to erase this scar from their skin.

The BP logo stares proclamatory, cocky, from the walls of the Tate gallery. It has been there for over 25 years, as the average annual concentration of carbon dioxide in the atmosphere climbed from 354ppm to 399ppm today. The measurement had already exceeded the upper safety limit, 350ppm, when the sponsorship deal with Tate was first struck.

By engraving the body of the gallery with its own flowery helios, the oil sponsor imprints in our minds the association of BP with the inherent goodness of Tate. Yet it leaves a stain. BP pays on average £500,000 per year to dangle its logo in the eyeline of the gallery goer, intruding upon their contemplation of the collections. This choreographed juxtaposition is a hoodwink; while claimed to be merely skin deep, the mark helps BP to seep into the fabric of the building, its organs, into the visitor’s personal experience and out into the world as benign. It is a visceral act; not simply to speak of, not only to stand beside, but a raw, physical marking of Tate’s manifest being. There is no frame to this artwork, no bounding box cutting between the real and the symbolic. Where the artworks reflect and shape our culture and lives, BP’s logo expresses and reasserts its power over our economies and infrastructures. The BP tattoo on Tate is ultimately a temporary transfer. The contract will end; the imprint will fade. The history will be left to memory and the jewel of BP will fall from Tate’s arms: worn, treasured, and suddenly out of fashion.

Giving tattoos Today Liberate Tate is tattooing itself: a Birthmark to embody the risk to the climate throughout our lifetimes. The tattoo-givers are not tattoo artists or tattooists. With respect to the artform and the profession, we would not bestow upon each other the titles reserved for those who have many yearsâ&#x20AC;&#x2122; experience in the craft. As part of each Birthmarking, you will see the tattoo-givers and the members of Liberate Tate engage in a conversation about their journey to this moment. How did you begin to take action on climate change? What was your personal process to seek social change? For those of us whose Birthmark is at or below 350ppm, the change in our lifetime covers the shift from a point of safety into the era of climate risk. If action had been taken then, we would not face the challenges we do now. For those of us whose Birthmark is above 350ppm, we feel this differently: we have not known a safe level of carbon dioxide in the atmosphere in our lifetimes. But we would like to. The tattoos we give each other are permanent, as climate change will be if we, as a culture, do not take up the challenge to prevent it. We wear these Birthmarks as a sign of our commitment to do so. As the marks are made on our bodies, yet more global climate talks begin in Paris. The seeds of Liberate Tate were sown six years ago, as we all confronted the failures of the global climate talks in Copenhagen. So this performance not only calls on Tate to drop BP, but marks the journey of the global climate movement: uprising, emboldened, ever hopeful.

An introduction to protest tattoos Tattoos have formed part of performance and protest around the world for many years. The following examples give a sense of the breadth of artistic practice making political statements on the artists’ bodies, and the potential of tattoos to become viral memes, symbols which travel around the world connecting people and social movements.

After the famous squat Ungdomshuset in Copenhagen was evicted in 2007 (having existed since 1982), many activists tattooed the squat’s street number, “69”, on their bodies. Danish squatters, 2007-ongoing, skin, needles, ink, activists own bodies As his colleagues retrace the steps of the Red Army’s Long March, Chinese artist Qin Ga explores the relationship between the individual and collective bodies by mapping the route across his back. [pictured left] Ga, 2002, skin, needles, ink, artist’s own body

In 2015, Liberate Tate tattooed Kazimir Malevich’s “Black Square” onto their bodies as a symbol of their continued determination to end BP sponsorship at Tate, referencing their earlier performance “Hidden Figures”. [pictured above] Liberate Tate, 2015, skin, needles, ink, artists’ own bodies “Project Semicolon” began by inviting anyone who has struggled with depression to draw a semicolon on their skin and photograph it, which quickly grew to become a global phenomenon that has seen hundreds of people tattoo themselves with the symbol of continuity and hope. Project Semicolon, 2013-ongoing, skin, needles, ink, bodies Following the Tibetan uprising in 1988-89, many political prisoners replaced traditional woven bracelets with tattoos on their arms; both the bracelets and tattoos are called rangzen, meaning freedom in Tibetan. Tibetans and Tibetan solidarity activists, 1989-ongoing, skin, needles, ink, bodies

Participatory arts and ecology project, “extInked”, saw 100 people become ambassadors for a specific rare and endangered British species by tattooing their species on their bodies during a three day performance event in Salford. [pictured left] Ultimate Holding Company in collaboration with Anatomy Projects and Ink Vs Steek, 2009, skin, needles, ink, bodies Marina Vainshtein, physically inscribes herself into a history for which she was born too late; her re-enactment of memory is her own testimonial to the Holocaust, performed as surrogate witness in whom trauma has been induced. [pictured below] Vainshtein, c.1989-1996 skin, needles, ink, artist’s own body

In solidarity with a calf scheduled for slaughter that was later liberated, vegan activists tattooed themselves with “Calf 269” in Rabin Square, Tel Aviv and outside a KFC restaurant in Leeds, UK in 2012, since which time hundreds of vegans around the world joined the protest by tattooing themselves. Non-affiliated vegan activists, 2012-ongoing, skin, needles, ink, activists’ own bodies When New York City banned tattooing in 1976, Spider Webb protested by setting up a tattoo station on the front steps of the Museum of Modern Art. [pictured below] Webb, 1976, skin, needles, ink, bodies

The technology of tattoos inside the gallery Today, Liberate Tate is drawing a line through history from the industrial revolution, via the art of the era, the mechanical technologies tied to electrical power generation, and carbon dioxide increase in Earth’s atmosphere. The walls in this gallery are adorned with artworks completed between 1840 and 1890, known as the Second Industrial Revolution or the Technological Revolution. This was also the same period in which the technology of tattooing was developed. The two artistic practices of painting canvas and pigmenting skin now stand side by side in contrast and in dialogue. There are two main types of tattoo machine used today. Both designs stem from the original technology and are closely linked to the mechanics of electrical power generation. The industrial revolution ignited the parallel processes of electricity, tattooing and an increase in carbon dioxide in the Earth’s atmosphere. In the 1870s, Edison’s rotary designs for an electric pen inspired O’Reilly of Newark, New Jersey and Riley of London to design tattoo machines, patenting them days apart. Riley’s coil is most commonly used today, although O’Reilly’s rotary has gained popularity. Liberate Tate uses the quieter hum of the rotary machine in our performance / ritual / intervention today. With each inking of the skin, we trace our connections to this history before our lifetimes: a journey of technology, art, and climate change.

The design and the symbol The Birthmark tattoo design [pictured right] positions the individual within the context of rising levels of carbon dioxide in Earth’s atmosphere. The only differences from one participant-performer to the next is the number (correlating with their year of birth), the size and the location on their body. The numbers are the average carbon dioxide levels in Earth’s atmosphere as recorded by the US National Oceanic and Atmospheric Administration Earth System Research Laboratory. The process of documenting the increasing concentration of carbon dioxide was begun by Charles Keeling at a research laboratory on Mauna Loa Island, Hawaii. Records began in 1959, and figures earlier than this date are based on polar ice core analysis. Performers’ figures are taken from these two sources according to their birth before or after 1959. These tattoos are stenciled in the Travelling Typewriter typeface. The typewriter was also part of the Technological Revolution, invented in 1868. The font was chosen for its connection to the evolving technologies of ink on page and screen. Each number is followed by a guillemet. The less-than symbol signifies inequality, a reference particularly pertinent to the issue of climate change. The guillemet is also often referred to as a chevron, a subtle echo of another of the world’s largest oil companies. In this context, the symbol indicates the rise in carbon dioxide levels that continues from the year of each of our births onwards.

350< Certificate of consent Certificates of consent are shared by the members of Liberate Tate performing Birthmark. Consent is given by the tattoo-receiver to the tattoo-giver. Tattooing is a permanent change to the body, just as climate change is a permanent change to the planetâ&#x20AC;&#x2122;s temperature, sea levels and weather systems. Liberate Tate performers make these indelible changes on their bodies as part of their actions to prevent irrevocable increases in global temperature. 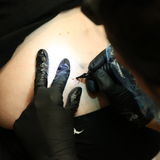 Birthmark was performed in the 1840s gallery of 'A BP Walk Through British Art' at Tate Britain on the 28th November, 2015, the start of the...

Birthmark was performed in the 1840s gallery of 'A BP Walk Through British Art' at Tate Britain on the 28th November, 2015, the start of the...