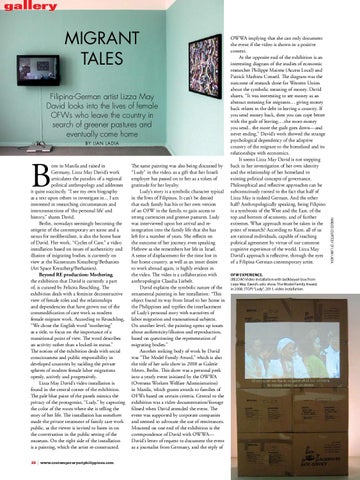 The same painting was also being discussed by “Ludy” in the video, as a gift that her Israeli employer has passed on to her as a token of gratitude for her loyalty. Ludy’s story is a symbolic character typical in the lives of Filipinos. It can’t be denied that each family has his or her own version of an OFW in the family, to gain access to strong currencies and greener pastures. Ludy was interviewed upon her arrival and reintegration into the family life that she has left for a number of years. She reflects on the outcome of her journey, even speaking Hebrew as she remembers her life in Israel. A sense of displacement for the time lost in her home country, as well as an inner desire to work abroad again, is highly evident in the video. The video is a collaboration with anthropologist Claudia Liebelt. David explains the symbolic nature of the ornamental painting in her installation: “This object found its way from Israel to her home in the Philippines and typifies the interlacement of Ludy’s personal story with narratives of labor migration and transnational subjects. On another level, the painting opens up issues about authenticity/illusion and reproduction, based on questioning the representation of migrating bodies.” Another striking body of work by David was “The Model Family Award,” which is also the title of her solo show in 2008 at Galerie Metro, Berlin. This show was a personal peek into a yearly event initiated by the OWWA (Overseas Workers Welfare Administration) in Manila, which grants awards to families of OFWs based on certain criteria. Central to the exhibition was a video documentation/footage filmed when David attended the event. The event was supported by corporate companies and seemed to advocate the use of remittances. Mounted on one end of the exhibition is the correspondence of David with OWWA— David’s letter of request to document the event as a journalist from Germany, and the reply of

orn in Manila and raised in Germany, Lizza May David’s work articulates the paradox of a regional political anthropology and addresses it quite succinctly. “I see my own biography as a text upon others to investigate in... I am interested in researching circumstances and interconnections of ‘the personal life’ and history,” shares David. Berlin, nowadays seemingly becoming the zeitgeist of the contemporary art scene and a nexus for neoliberalism, is also the home base of David. Her work, “Cycles of Care,” a video installation based on issues of authenticity and illusion of migrating bodies, is currently on view at the Kunstraum Kreuzberg/Bethanien (Art Space Kreuzberg/Bethanien). Beyond RE production: Mothering, the exhibition that David is currently a part of, is curated by Felicita Reuchling. The exhibition deals with a feminist deconstructive view of female roles and the relationships and dependencies that have grown out of the commodification of care work as modern female migrant work. According to Reuschling, “We chose the English word “mothering” as a title, to focus on the importance of a transitional point of view. The word describes an activity rather than a locked-in status.” The notion of the exhibition deals with social consciousness and public responsibility in developed countries by tackling the private spheres of modern female labor migrations openly, actively and progressively. Lizza May David’s video installation is found in the central corner of the exhibition. The pale blue paint of the panels mimics the privacy of the protagonist, “Ludy,” by capturing the color of the room where she is telling the story of her life. The installation has somehow made the private treatment of family care work public, as the viewer is invited to listen in on the conversation in the public setting of the museum. On the right side of the installation is a painting, which the artist re-constructed.

OWWA implying that she can only document the event if the video is shown in a positive context. At the opposite end of the exhibition is an interesting diagram of the studies of economic researcher Philippe Mairess (Access Local) and Patrick Mathieu Conseil. The diagram was the outcome of research done for Western Union about the symbolic meaning of money. David shares, “It was interesting to see money as an abstract meaning for migrants… giving money back relates to the debt in leaving a country. If you send money back, then you can cope better with the guilt of leaving….the more money you send.. the more the guilt goes down—and never ending.” David’s work showed the strange psychological dependency of the adoptive country of the migrant to the homeland and its relationships with economics. It seems Lizza May David is not stepping back in her investigation of her own identity and the relationship of her homeland to existing political concepts of governance. Philosophical and reflective approaches can be subconsciously rooted to the fact that half of Lizza May is indeed German. And the other half? Anthropologically speaking, being Filipino is a symbiosis of the West and the East, of the top and bottom of economy, and of further extremes. What approach must be taken in the point of research? According to Kant, all of us are rational individuals, capable of reaching political agreement by virtue of our common cognitive experience of the world. Lizza May David’s approach is reflective, through the eyes of a Filipina-German contemporary artist.