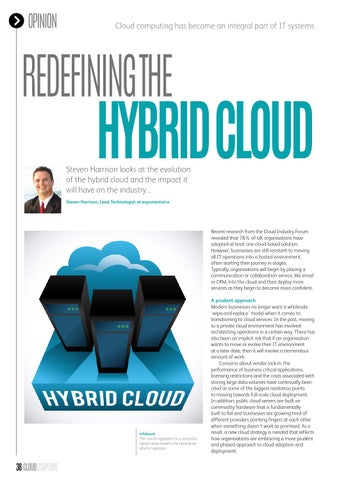 Cloud computing has become an integral part of IT systems

Steven Harrison looks at the evolution of the hybrid cloud and the impact it will have on the industry... Steven Harrison, Lead Technologist at exponential-e

Recent research from the Cloud Industry Forum revealed that 78% of UK organisations have adopted at least one cloud-based solution. However, businesses are still resistant to moving all IT operations into a hosted environment, often starting their journey in stages. Typically, organisations will begin by placing a communication or collaboration service, like email or CRM, into the cloud and then deploy more services as they begin to become more confident.

infoburst The crucial ingredient for a successful hybrid cloud model is the network on which it operates.

A prudent approach Modern businesses no longer want a wholesale â&#x20AC;&#x2DC;wipe-and-replaceâ&#x20AC;&#x2122; model when it comes to transitioning to cloud services. In the past, moving to a private cloud environment has involved architecting operations in a certain way. There has also been an implicit risk that if an organisation wants to move or evolve their IT environment at a later date, then it will involve a tremendous amount of work. Concerns about vendor lock-in, the performance of business critical applications, licensing restrictions and the costs associated with storing large data volumes have continually been cited as some of the biggest resistance points to moving towards full-scale cloud deployment. In addition, public cloud servers are built on commodity hardware that is fundamentally built to fail and businesses are growing tired of different providers pointing fingers at each other when something doesnâ&#x20AC;&#x2122;t work as promised. As a result, a new cloud strategy is needed that reflects how organisations are embracing a more prudent and phased approach to cloud adoption and deployment. 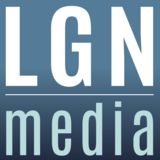 CCW is the UKs first digital publication totally dedicated to the subject of cloud computing. CCW reaches an audience of over 15,000 individ...

CCW is the UKs first digital publication totally dedicated to the subject of cloud computing. CCW reaches an audience of over 15,000 individ...