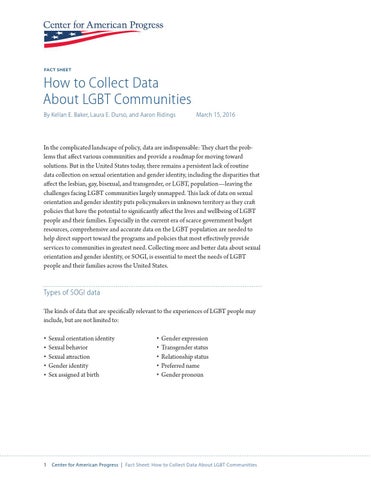 In the complicated landscape of policy, data are indispensable: They chart the problems that affect various communities and provide a roadmap for moving toward solutions. But in the United States today, there remains a persistent lack of routine data collection on sexual orientation and gender identity, including the disparities that affect the lesbian, gay, bisexual, and transgender, or LGBT, population—leaving the challenges facing LGBT communities largely unmapped. This lack of data on sexual orientation and gender identity puts policymakers in unknown territory as they craft policies that have the potential to significantly affect the lives and wellbeing of LGBT people and their families. Especially in the current era of scarce government budget resources, comprehensive and accurate data on the LGBT population are needed to help direct support toward the programs and policies that most effectively provide services to communities in greatest need. Collecting more and better data about sexual orientation and gender identity, or SOGI, is essential to meet the needs of LGBT people and their families across the United States.

Types of SOGI data The kinds of data that are specifically relevant to the experiences of LGBT people may include, but are not limited to: • Sexual orientation identity • Sexual behavior • Sexual attraction • Gender identity • Sex assigned at birth

1  Center for American Progress  |  Fact Sheet: How to Collect Data About LGBT Communities

There are at least four broad types of data collection systems in which it is important to include SOGI data: 1. Population surveys 2. Research 3. Administrative and programmatic data, such as intake forms and applications 4. Clinical records

Specific considerations related to SOGI data collection Collecting data related to the experiences of specific populations within LGBT communities—including LGBT people of color, older adults, youth, people receiving social welfare support services, people whose primary language is not English, and people interacting with the criminal justice system—may involve particular considerations related to issues such as terminology and confidentiality protections. For example, service providers collecting data from the individuals whom they serve should adopt and post clear nondiscrimination and confidentiality policies that indicate what protections are in place and how any data collected will be used and kept confidential. Assurances of nondiscrimination and confidentiality are critical in these settings because LGBT individuals may have well-founded concerns that sharing SOGI information will expose them to discrimination, including denials of access to benefits and services. In all cases where SOGI data are collected in program application or administration, data collection should be paired with technical assistance to help program administrators understand and use the data. In services for homeless youth, for instance, it is not sufficient to simply collect SOGI data: Program administrators must be able to understand how to use these data to inform their efforts to appropriately house and serve LGBT, queer, questioning, and gender-nonconforming youth. For communities with significant numbers of people whose primary language is not English—which advocacy organizations generally define as a community where more than 5 percent of individuals have a primary language other than English—the response options for SOGI questions should be translated into relevant local languages. Similarly, data collection efforts in communities that commonly use terminology that differs from LGBT, such as “two-spirit” in many Native American communities and “same-genderloving” in some African American communities, should employ these specific terms. When feasible, SOGI data collection efforts should also include open field, or write-in, response options to allow individuals to describe themselves in their own words.

2  Center for American Progress  |  Fact Sheet: How to Collect Data About LGBT Communities

3  Center for American Progress  |  Fact Sheet: How to Collect Data About LGBT Communities

Sexual orientation Sexual orientation comprises three distinct but related variables: self-identification, sexual behavior, and sexual attraction. Questions related to each of these variables can be used singly or together on surveys depending on what information is relevant for any particular data collection effort. For example, in studies that focus on transmission risk for HIV and other sexually transmitted infections, researchers may need information about sexual behavior in addition to sexual orientation identity. In surveys of youth, sexual attraction is particularly relevant—especially among young people who are not yet sexually active.

Self-identification Do you consider yourself to be: ––Heterosexual or straight ––Gay or lesbian ––Bisexual ––Different identity (please state):

Sexual behavior In the past [insert time period, e.g. one year] with whom have you had sex? ––Men only ––Women only ––Both men and women ––I have not had sex

4  Center for American Progress  |  Fact Sheet: How to Collect Data About LGBT Communities

The two-step question is currently in use in HIV surveillance conducted by the Centers for Disease Control and Prevention, or CDC. The transgender status question is in use on the Behavioral Risk Factor Surveillance System, or BRFSS, questionnaires in more than 20 states and territories. It is important to note that the standalone question, “What is your sex?,” with the three answer options “Male/Female/Transgender” is never appropriate, as many transgender individuals identify as simply men or women and will not select an answer that will allow them to be correctly identified as transgender.

Two-step question 1. What is your current gender identity?

2. What sex were you assigned at birth, meaning on your original birth certificate?

A shorter version of this question that is in use on the California Health Interview Survey in 2016 is: 1. What is your current gender identity?

2. What sex were you assigned at birth, meaning on your original birth certificate?

5  Center for American Progress  |  Fact Sheet: How to Collect Data About LGBT Communities

6  Center for American Progress  |  Fact Sheet: How to Collect Data About LGBT Communities

Research There are a variety of ways to include SOGI data collection in research efforts. The primary priority in research studies is recognition that LGBT people are potentially part of the study population. As such, demographic questions for all research study participants should include sexual orientation and gender identity, and all research studies should stratify—that is, separate out—and report data related to LGBT populations whenever possible.

Administrative and programmatic data Administrative and programmatic data collection is a major source of information about the experiences of LGBT people. This type of data collection includes: • Data collected from program applicants • Data collected from program participants • Data collected from smaller, nonrandom groups of people—such as employees Because administrative and programmatic data are generally collected from individuals who are either applying for or participating in a program, or on the job, it is important to ask questions that are not overly intrusive. For instance, the two-step gender identity question that asks about birth sex may be inappropriate for use on an employee survey, but appropriate on an application for health insurance coverage. It is also important to make sure that LGBT data collection in these settings is accompanied by strong LGBT-inclusive nondiscrimination protections, so that respondents are free to answer honestly without compromising their privacy and without putting their jobs or access to programs in jeopardy. In addition to the question designs described above, an LGBT single-pass question can also be used in these settings. For the single-pass question, respondents must be able to select all answers that apply. This is the only way respondents will be able to identify both their sexual orientation and gender identity.

7  Center for American Progress  |  Fact Sheet: How to Collect Data About LGBT Communities

Single-pass LGBT identity question Do you think of yourself as (please check all that apply): ––Straight ––Gay or lesbian ––Bisexual ––Transgender ––Not listed above (please state): Optional desirable enhancement:

What is your preferred name? Gender pronoun

8  Center for American Progress  |  Fact Sheet: How to Collect Data About LGBT Communities

Clinical records Data on sexual orientation and gender identity in health care settings help improve quality of care and health outcomes by facilitating the provision of services that are particularly relevant for LGBT people, such as anatomically appropriate preventive screenings for transgender people, assessments of risk for sexually transmitted infections such as HIV, and effective screening for mental and behavioral health concerns. More information about collecting SOGI data in medical records can be found at www.doaskdotell.org.

SOGI data collection in medical records Do you think of yourself as: ––Straight or heterosexual ––Lesbian, gay, or homosexual ––Bisexual ––Different identity (please state): What is your current gender identity? (Check all that apply.) ––Male ––Female ––Transgender man ––Transgender woman ––Genderqueer/Gender-nonconforming ––Different identity (please state): What sex were you assigned at birth on your original birth certificate? (Check one.) ––Male ––Female In the past [insert time period e.g. one year] with whom have you had sex? ––Men only ––Women only ––Both men and women ––I have not had sex

9  Center for American Progress  |  Fact Sheet: How to Collect Data About LGBT Communities

10  Center for American Progress  |  Fact Sheet: How to Collect Data About LGBT Communities

Collecting more and better data about sexual orientation and gender identity is essential to meet the needs of LGBT people and their families across the United States. by Kellan Baker, Laura E. Durso, Aaron Ridings - Center for American Progress