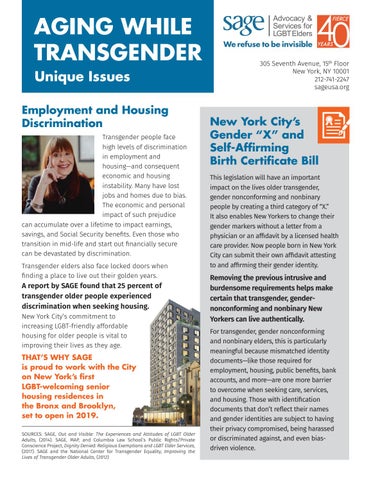 AGING WHILE TRANSGENDER Unique Issues Employment and Housing Discrimination Transgender people face high levels of discrimination in employment and housing—and consequent economic and housing instability. Many have lost jobs and homes due to bias. The economic and personal impact of such prejudice can accumulate over a lifetime to impact earnings, savings, and Social Security benefits. Even those who transition in mid-life and start out financially secure can be devastated by discrimination. Transgender elders also face locked doors when finding a place to live out their golden years.

A report by SAGE found that 25 percent of transgender older people experienced discrimination when seeking housing. New York City’s commitment to increasing LGBT-friendly affordable housing for older people is vital to improving their lives as they age.

THAT’S WHY SAGE is proud to work with the City on New York’s first LGBT-welcoming senior housing residences in the Bronx and Brooklyn, set to open in 2019. SOURCES: SAGE, Out and Visible: The Experiences and Attitudes of LGBT Older Adults, (2014). SAGE, MAP, and Columbia Law School’s Public Rights/Private Conscience Project, Dignity Denied: Religious Exemptions and LGBT Elder Services, (2017). SAGE and the National Center for Transgender Equality, Improving the Lives of Transgender Older Adults, (2012)

New York City’s Gender “X” and Self-Affirming Birth Certificate Bill This legislation will have an important impact on the lives older transgender, gender nonconforming and nonbinary people by creating a third category of “X.” It also enables New Yorkers to change their gender markers without a letter from a physician or an affidavit by a licensed health care provider. Now people born in New York City can submit their own affidavit attesting to and affirming their gender identity.

Removing the previous intrusive and burdensome requirements helps make certain that transgender, gendernonconforming and nonbinary New Yorkers can live authentically. For transgender, gender nonconforming and nonbinary elders, this is particularly meaningful because mismatched identity documents—like those required for employment, housing, public benefits, bank accounts, and more—are one more barrier to overcome when seeking care, services, and housing. Those with identification documents that don’t reflect their names and gender identities are subject to having their privacy compromised, being harassed or discriminated against, and even biasdriven violence.

A License to Discriminate

The federal government’s attempts to roll back protections and make allowances for religious-based discrimination means that the City must continue to do all it can to protect LGBT people. The expansion of a religious license to discriminate at the federal level threatens the lives

The research on transgender aging is severely limited, which makes it difficult to assess the specific needs of transgender older people, let alone craft effective interventions for this population. The overarching problem is

of transgender older people because 85 percent

of nonprofit continuing-care retirement communities are affiliated with a religious institution. This has the potential for severe

negative consequences for the care of LGBT elders as they age.

THAT’S WHY SAGE launched a nationwide campaign to educate the public on what it means for an older LGBT person to be denied care and/or services as they age because of a provider’s religious beliefs.

lack of data; most federal surveys and data

collection systems do not assess gender in ways that allow for transgender individuals to identify themselves. Little is known about the specific health needs of transgender people in later life, including how transition-related medical care should be monitored or modified as individuals age.

THAT’S WHY SAGE pushed back against the Trump administration’s erasure of LGBT people from a national aging survey—and won.

Many transgender elders enter their later years with severe health concerns yet without the social and community supports to manage their health.

While some transgender SAGE CENTER BRONX SAGE CENTER HARLEM older people have strong EDIE WINDSOR SAGE CENTER SAGE-GRIOT Innovative community ties and Senior Center of Brooklyn SAGE PRIDE CENTER families of choice, too OF STATEN ISLAND many are socially isolated and lack opportunities to be actively engaged in their communities. Many feel unwelcome at senior centers, volunteer programs, and even at LGBT community centers, which they may perceive as unfriendly to transgender people or to elders generally. Many find themselves estranged or disconnected from those communities when they come out as transgender or begin to transition. All of these barriers are not only detrimental to the well-being and health of individuals, but also to the broader communities that could benefit from their knowledge and perspective.

THAT’S WHY SAGE is committed to providing cultural competency training to providers in New York and across the country through our SAGECare program.

THAT’S WHY SAGE’s five senior centers in NYC and their inclusive programming are crucial to engaging and providing support to the older transgender population.