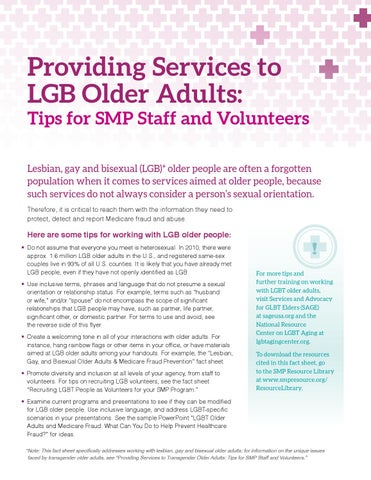 Providing Services to LGB Older Adults: Tips for SMP Staff and Volunteers Lesbian, gay and bisexual (LGB)* older people are often a forgotten population when it comes to services aimed at older people, because such services do not always consider a person’s sexual orientation. Therefore, it is critical to reach them with the information they need to protect, detect and report Medicare fraud and abuse.

Here are some tips for working with LGB older people: ■■

 o not assume that everyone you meet is heterosexual. In 2010, there were D approx. 1.6 million LGB older adults in the U.S., and registered same-sex couples live in 93% of all U.S. counties. It is likely that you have already met LGB people, even if they have not openly identified as LGB.  se inclusive terms, phrases and language that do not presume a sexual U orientation or relationship status. For example, terms such as “husband or wife,” and/or “spouse” do not encompass the scope of significant relationships that LGB people may have, such as partner, life partner, significant other, or domestic partner. For terms to use and avoid, see the reverse side of this flyer.  reate a welcoming tone in all of your interactions with older adults. For C instance, hang rainbow flags or other items in your office, or have materials aimed at LGB older adults among your handouts. For example, the “Lesbian, Gay, and Bisexual Older Adults & Medicare Fraud Prevention” fact sheet.  romote diversity and inclusion at all levels of your agency, from staff to P volunteers. For tips on recruiting LGB volunteers, see the fact sheet “Recruiting LGBT People as Volunteers for your SMP Program.”

! For more tips and further training on working with LGBT older adults, visit Services and Advocacy for GLBT Elders (SAGE) at sageusa.org and the National Resource Center on LGBT Aging at lgbtagingcenter.org. To download the resources cited in this fact sheet, go to the SMP Resource Library at www.smpresource.org/ ResourceLibrary.

 xamine current programs and presentations to see if they can be modified E for LGB older people. Use inclusive language, and address LGBT-specific scenarios in your presentations. See the sample PowerPoint “LGBT Older Adults and Medicare Fraud: What Can You Do to Help Prevent Healthcare Fraud?” for ideas. *Note: This fact sheet specifically addresses working with lesbian, gay and bisexual older adults; for information on the unique issues faced by transgender older adults, see “Providing Services to Transgender Older Adults: Tips for SMP Staff and Volunteers.”

The following are important terms to understand and use when working with LGBT people. LGBT: An acronym that stands for lesbian, gay, bisexual, transgender. Used interchangeably with GLBT. LGBT is a safe and neutral term to use. Gay: A word used to describe anyone, mainly men, who have primary physical, romantic, and/or emotional attractions to someone of the same sex. Lesbian: A woman whose primary physical, romantic, and or/emotional attraction is to other women. Some lesbians may prefer to identify as gay or as gay women. Bisexual, Bi: A person who is physically, romantically, and/or emotionally attracted to both men and women. Bisexual does not suggest having equal sexual experience with both men and women. In fact, some people who identify as bisexual may not have had any sexual experience at all. Transgender: An umbrella term for people whose gender identity and/or gender expression differs from the sex they were assigned at birth. The term may include, but is not limited to, transsexuals and cross-dressers. Transgender people may identify as female-to-male (FTM) or male-to-female (MTF). It is important to use the descriptive term preferred by the individual. Transgender people may or may not decide to alter their bodies hormonally and/or surgically. Cisgender: A term used to describe people whose gender identity and/or gender expression is the same as their biological or assigned sex. Sexual orientation: A person’s primary physical, romantic and/or emotional attraction to members of the same and/or opposite sex, including lesbian, gay, bisexual and heterosexual (straight) orientations. Gender Identity: The gender you feel you are inside (man, woman, neither or both). Gender identity and sexual orientation are not the same.

Terms to Avoid Queer: Historically a very negative term. While in recent years, some younger LGBT people have begun using the term to describe themselves, older adults have often had bad experiences with the word. Lifestyle: Term used to refer to LGBT lives. Just as there is no one “straight lifestyle,” there is no one LGBT lifestyle. Homosexual: An outdated, clinical and medical term that is no longer the preferred word to describe someone who is gay or lesbian. It has taken on negative connotations because of its previous use to denote a mental illness. Sexual Preference: A term that conveys the suggestion that being gay or lesbian is a choice and therefore can be “cured” or changed.

This project was supported, in part by grant number 90SM0011, from the U.S. Administration for Community Living, Department of Health and Human Services, Washington, D.C. 20201. Grantees undertaking projects under government sponsorship are encouraged to express freely their findings and conclusions. Points of view or opinions do not, therefore, necessarily represent official Administration for Community Living policy.

This tip sheet, developed by SAGE (Services & Advocacy for GLBT Elders), is intended for Senior Medicare Patrol staff and volunteers to prov...

This tip sheet, developed by SAGE (Services & Advocacy for GLBT Elders), is intended for Senior Medicare Patrol staff and volunteers to prov...