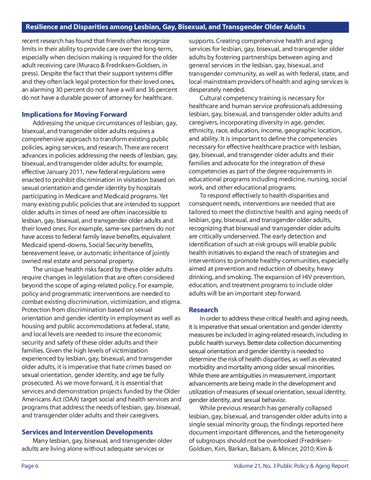 Resilience and Disparities among Lesbian, Gay, Bisexual, and Transgender Older Adults recent research has found that friends often recognize limits in their ability to provide care over the long-term, especially when decision making is required for the older adult receiving care (Muraco & Fredriksen-Goldsen, in press). Despite the fact that their support systems differ and they often lack legal protection for their loved ones, an alarming 30 percent do not have a will and 36 percent do not have a durable power of attorney for healthcare.

Services and Intervention Developments Many lesbian, gay, bisexual, and transgender older adults are living alone without adequate services or Page 6

Research In order to address these critical health and aging needs, it is imperative that sexual orientation and gender identity measures be included in aging-related research, including in public health surveys. Better data collection documenting sexual orientation and gender identity is needed to determine the risk of health disparities, as well as elevated morbidity and mortality among older sexual minorities. While there are ambiguities in measurement, important advancements are being made in the development and utilization of measures of sexual orientation, sexual identity, gender identity, and sexual behavior. While previous research has generally collapsed lesbian, gay, bisexual, and transgender older adults into a single sexual minority group, the findings reported here document important differences, and the heterogeneity of subgroups should not be overlooked (FredriksenGoldsen, Kim, Barkan, Balsam, & Mincer, 2010; Kim & Volume 21, No. 3 Public Policy & Aging Report

The National Academy on an Aging Society teamed up with SAGE to publish this edition of the Public Policy and Aging Report. There are a numb...

The National Academy on an Aging Society teamed up with SAGE to publish this edition of the Public Policy and Aging Report. There are a numb...