Health and Access to Care & Coverage for LGBT Individuals in the U.S. 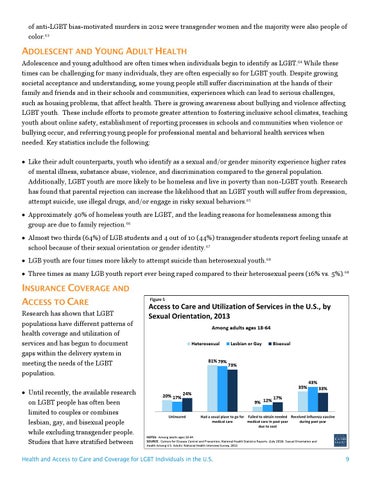 of anti-LGBT bias-motivated murders in 2012 were transgender women and the majority were also people of color.

Adolescence and young adulthood are often times when individuals begin to identify as LGBT. While these times can be challenging for many individuals, they are often especially so for LGBT youth. Despite growing societal acceptance and understanding, some young people still suffer discrimination at the hands of their family and friends and in their schools and communities, experiences which can lead to serious challenges, such as housing problems, that affect health. There is growing awareness about bullying and violence affecting LGBT youth. These include efforts to promote greater attention to fostering inclusive school climates, teaching youth about online safety, establishment of reporting processes in schools and communities when violence or bullying occur, and referring young people for professional mental and behavioral health services when needed. Key statistics include the following:  Like their adult counterparts, youth who identify as a sexual and/or gender minority experience higher rates of mental illness, substance abuse, violence, and discrimination compared to the general population. Additionally, LGBT youth are more likely to be homeless and live in poverty than non-LGBT youth. Research has found that parental rejection can increase the likelihood that an LGBT youth will suffer from depression, attempt suicide, use illegal drugs, and/or engage in risky sexual behaviors.  Approximately 40% of homeless youth are LGBT, and the leading reasons for homelessness among this group are due to family rejection.  Almost two thirds (64%) of LGB students and 4 out of 10 (44%) transgender students report feeling unsafe at school because of their sexual orientation or gender identity.  LGB youth are four times more likely to attempt suicide than heterosexual youth.  Three times as many LGB youth report ever being raped compared to their heterosexual peers (16% vs. 5%).

Research has shown that LGBT populations have different patterns of health coverage and utilization of services and has begun to document gaps within the delivery system in meeting the needs of the LGBT population.  Until recently, the available research on LGBT people has often been limited to couples or combines lesbian, gay, and bisexual people while excluding transgender people. Studies that have stratified between

Health and Access to Care & Coverage for LGBT Individuals in the U.S.

This issue brief provides an overview of what is known about LGBT health status, coverage, and access in the United States, and reviews the implications of the ACA, the overturning of DOMA, and other recent policy developments for LGBT individuals and their families going forward. This publication is from the Kaiser Family Foundation.