An in with a stranger 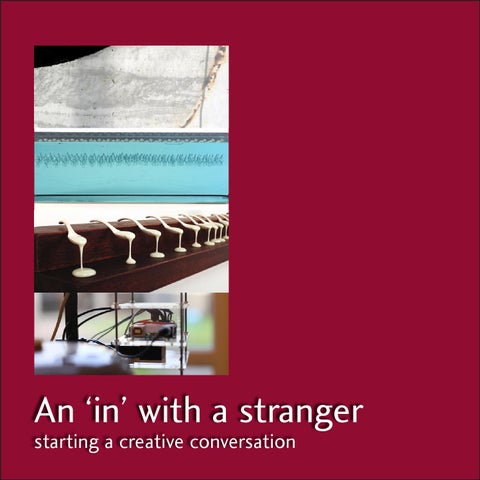 only the world around us but the way we

“An in with a stranger…” with the aim

look at and respond to art that reflects

of starting a creative conversation that

it. Curators are there to bring ideas and

explores the idea of weather as metaphor

objects together to act in as the signposts

for the human condition.

and way markers to assist us in the finding of solutions. The curator is looking for

“An in with a stranger…” has for Aidan been

answers to help us unlock the questions

a creative journey, he has moved from being

that are central to our very existence and

artist to curator. This in itself has meant a

the way we perceive the world around us.

The artist as creator sets out on a journey

he finds the solutions to answer them.

I feel the role of the curator is to advance

the visual vocabulary of the viewer,

other questions not initially considered

broadening the way we perceive not

by the creative artist. The curator is not

about finding artists and makers with the

same questions as Aidan through their

same view but more about being able to

work. He has seen connections, links

provide us as viewers with a new way of

and similarities that are unknown to the

looking at the fundamental questions.

creators. It is only through Aidan’s curation that this very disparate group are brought

Aidan is exploring how weather as a meta-

together. We can then start to see their

phor can be used to explore deeper ideas.

work in a different way, making our own inner connections, drawing upon our own

“metaphor is a figure of speech that

identifies something as being the same as

to experience the world around us in

some unrelated thing for rhetorical effect,

a different way. Through his exhibition

thus highlighting the similarities between

“An in with a stranger….” Aidan provides

us with a new perspective on how we perceive the notion of weather.

Weather as Metaphor In Scandinavia there is a phrase ‘There’s

the way people interact in anonymous

no such thing as bad weather, only bad

strike up conversations with strangers

in the way they once did, particularly in

a train ploughing through the snow with

nicht’, alluding to the fact that nothing,

separate ourselves from ‘social toxicity’.

not even the weather, stops DB so there is no need to talk about it.

We love it seems, to talk about the weather.

the same practices, approach and milieu

It is a social “in” with strangers, or it was

that I employ with my practice as an artist

until recently when the dynamics of social

interactions changed with the increasing

socially engaged. What is of concern here

prevalence of ‘life mediated through

is weather as metaphor. How the internal

the screen’. This significant change to

state, the human condition, can be

represented by language associated with

context. The politics and discourse around

weather and then re-presented through

metaphor using art as a medium.

complex. To summarise this complexity however, there is a lack of representation

Exhibitions about weather have tended

of artists and curators with disabilities

to focus upon actual physical weather,

within the art world and they are often

viewed through a perjorative filter. This

relationship with his environment. Very

has the result of creating

few exhibitions explore the weather as

deficit of quality when the term Disability

a psychological metaphor. The weather

prefixes or suffixes anything within the art

does not exist in isolation and nor we do

we. It is of us and we are of it. The simple sophistication of the work This exhibition “An ‘in’ with a stranger

allows it to be read in many ways. Some

– starting a creative conversation”, has

works may apparently reference the

been curated within a ‘Disability Arts’

notion that disabled people are broken,

imperfect versions of a perfect, or whole

within Preece’s ceramics - each touches

self. Whereas in reality there is no such

upon a different sensory metaphor of

reference and nor is it made by a disabled

our experience of internal and external

Within “An ‘in’ with a stranger…” the media

and scale within each of the artist’s work is

expansive yet claustrophobic. There is

both broad and varied. What at first glance

nothing conceited or ostentatious here.

may seem a disparate selection actually

Whilst “Deconstructed Being” may deal

forms a cohesive whole within the design

with the fragmentation of the physical

of the exhibition. From Shaws’ collation

and psychological self, “Legion” explores

of digital weather data into evocative

the collective, the need for communion

analogue immersive sound streams, to the

and conversation yet ultimately addresses

glass encased voids of Mitchell and from

the overwhelming sense of alienation in

of Andersson to the palpable tensions

is pervasive, not only do we hear it but

they invite, then demand the viewer

we feel it too. It is evocative, palpable

to contemplate and reflect. They are

and Shaw’s sound works mirror this, in a

conversation pieces in all contexts of the

manner which is so much more than mere

reflection. Playing with a musical/aural

language he creates works which develop Glass, even the material itself is a metaphor

their own language and metaphors as

for the human condition, always fluid in a

they ebb and flow into the gallery.

state of flux and capable of being moulded and shaped. Depending on the external

Shaw doesn’t work in a derivative

and internal stresses it is both ductile and

reductive manner with sound. He is much

more responsive as he mediates created

or collected sound between source and audience.

Much of Shaw’s work occurs in, or is founded in, the public space. Weather

At times it is difficult to know whether

Andersson is directly responsible for

tension here exists between that quiet

the mark making or the director of the

presence and the geologic, the universal.

Zoe Preece, Presented as an everyday

work. However she does not play safe,

there is inherent risk within her practice,

ceramics from the Arts and Craft to the

it is created at the intersection of ‘too little

- too much’: between the work not being

together these worlds in her exquisite

created and it being destroyed.

homeliness of the kitchen and family, This is the pivotal metaphor within the

she injects an air of the sinister into these

work. We can always push forward but

otherwise nurturing motifs. The work is

we can never go back. Andersson always

redolent of the pastoral, yet visually the

brings us back to being ‘Mindful’ – thinking

tension, constraints and the pushing of

about the now, the individual moments

and the fragility of where we are. The

Preece, as do all the artists, encompasses

The works selected and brought together

the context of the exhibition, the social,

in “An ‘in with a stranger…”are neither

physical, environmental, political and the

obviously about the weather or the human

condition. Nor are they ‘about’ disability. They are about all these things. The covert

At first view none of the work in this

or ‘consciously unconscious’ drive here is

exhibition is instantly suggestive of

about starting a conversation, illustrating

weather as metaphor, yet and importantly

the connectedness and impact on mental

each piece selected has the power to

wellbeing this can have.

initiate reflection, contemplation and start a conversation. They are not huge

My aim is for these works to act as a catalyst,

spectaculars but rooted firmly in their own

to get people talking again, and once the

traditions, nor are they the candy-floss or

exhibition is over to leave a legacy of a

the ‘low-cal’ simulacra so prevalent in the

‘space’ where that conversation can

instant gratification frenzy of much of

An ‘in’ with a stranger - starting a creative conversation Curator

conversation exploring the notion of weather as a metaphor for the human condition. Aidan has brought together an International selection of artists whose work resonates with his vision. Featuring Catrin Andersson; Joanne Mitchell; Zoe Preece and Tim Shaw This exhibition is a Tu Fewn project and presented as part of LGAC’s “Maker to Curator” series.

or context specific works he creates/

Newcastle. His work explores the worlds we

curates. Moesby works increasingly at the

create and the roles we play within them.

intersection of Art, Technology and Well-

He is concerned with the relationships we

have to the environments we inhabit and the space we occupy – the stories which unfold and the memories which are left there. With a psycho-social research based approach, his practice is underpinned by conversation – real, imagined or virtual – which maybe experienced personally as a participant or observed. Language and metaphor is fundamental to the manner in which he sees the world, informing his approach to the site and/

documenter and an excavator of the shifting Swedish landscape, using drawing, photography and sculpture to express her vision. Catrin uses the outdoors as a mechanism and metaphor to explore her inner world. For Catrin, the main elements of being an artist are to believe in yourself, follow your intuition and listening to your feelings to create a piece of art. â&amp;#x20AC;&amp;#x153;We all have within us a creative force and an artist within.â&amp;#x20AC;? But for Catrin itâ&amp;#x20AC;&amp;#x2122;s about daring to take that first step to believe in your-self, for her the strongest power of art is that you listen to

For Catrin Andersson art is everywhere.

based PhD at The University of Sunderland.

examines how immaterial elements can

be exposed or preserved through glass,

exploring the concept of making visible

the intangible, using air as a metaphor for

bubbles, suspended within a glass space.

thought, memory and absence. Her work has been presented in galleries across the UK and in exhibitions in Europe and America, and featured in several publications on British Glass. Joanne has designed for Edinburgh Crystal, and been resident artist at the National Glass Centre, Sunderland. Joanne recently completed her practice-

the viewer through the repeated image

in-between states is central to her current

working practice. Uncertain and transient, it is a condition that exists at the heart of human being. The meniscus on a spoon filled to the point of tipping: this visual detail has been the point of return for her more recent works. The bulging liquid at the very limits of its container and beyond, describes a moment of extended pressure, of pent up potential. The ubiquitous image of spoon becomes a reference point towards connected narratives in the mind of the viewer. A thought, an idea is offered to

and artist. His practice incorporates

ZDB, CTM and FACT Liverpool. He is

diverse approaches to sound capture and

at Culture Lab at Newcastle University.

musical instruments and performances. Collaboration plays a central role in his approach, he has been lucky enough to make artistic work with many people including Chris Watson, John Bowers and Sébastien Piquemal. Tim has presented

The aims of Tu Fewn are to increase the

opportunity for arts organisations in

Wales to commission new high quality work by Disabled visual artists from across the UK and Internationally. The three participating Galleries in Wales are Llantarnam Grange Arts Centre, G39 and Ffotogallery.

Mainstream galleries in Wales • Working with Arts Organisations in Wales

Tu Fewn was commissioned by DASH

• To change working practices of galleries

and arts organisations through a practical

with funding from Arts Council Wales.

• To increase the number of Disabled people as an arts audience

An in with a stranger

Exhibition catalogue for the exhibition "An 'in' with a stranger" curated by Aidan Moesby as part of the Tu Fewn programme. 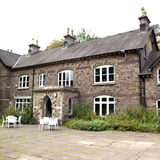