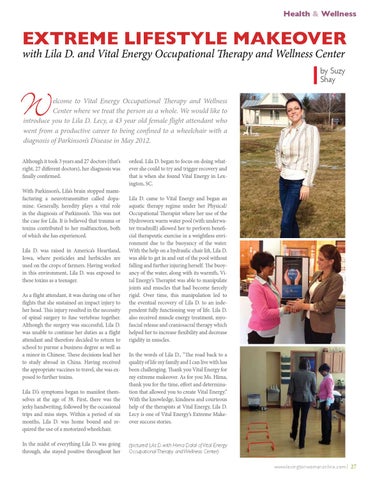 elcome to Vital Energy Occupational Therapy and Wellness Center where we treat the person as a whole. We would like to introduce you to Lila D. Lecy, a 43 year old female flight attendant who went from a productive career to being confined to a wheelchair with a diagnosis of Parkinson’s Disease in May 2012.

Although it took 3 years and 27 doctors (that’s right, 27 different doctors), her diagnosis was finally confirmed. With Parkinson’s, Lila’s brain stopped manufacturing a neurotransmitter called dopamine. Generally, heredity plays a vital role in the diagnosis of Parkinson’s. This was not the case for Lila. It is believed that trauma or toxins contributed to her malfunction, both of which she has experienced. Lila D. was raised in America’s Heartland, Iowa, where pesticides and herbicides are used on the crops of farmers. Having worked in this environment, Lila D. was exposed to these toxins as a teenager. As a flight attendant, it was during one of her flights that she sustained an impact injury to her head. This injury resulted in the necessity of spinal surgery to fuse vertebrae together. Although the surgery was successful, Lila D. was unable to continue her duties as a flight attendant and therefore decided to return to school to pursue a business degree as well as a minor in Chinese. These decisions lead her to study abroad in China. Having received the appropriate vaccines to travel, she was exposed to further toxins. Lila D.’s symptoms began to manifest themselves at the age of 38. First, there was the jerky handwriting, followed by the occasional trips and miss steps. Within a period of six months, Lila D. was home bound and required the use of a motorized wheelchair. In the midst of everything Lila D. was going through, she stayed positive throughout her

ordeal. Lila D. began to focus on doing whatever she could to try and trigger recovery and that is when she found Vital Energy in Lexington, SC. Lila D. came to Vital Energy and began an aquatic therapy regime under her Physical/ Occupational Therapist where her use of the Hydroworx warm water pool (with underwater treadmill) allowed her to perform beneficial therapeutic exercise in a weightless environment due to the buoyancy of the water. With the help on a hydraulic chair lift, Lila D. was able to get in and out of the pool without falling and further injuring herself. The buoyancy of the water, along with its warmth, Vital Energy’s Therapist was able to manipulate joints and muscles that had become fiercely rigid. Over time, this manipulation led to the eventual recovery of Lila D. to an independent fully functioning way of life. Lila D. also received muscle energy treatment, myofascial release and craniosacral therapy which helped her to increase flexibility and decrease rigidity in muscles. In the words of Lila D., “The road back to a quality of life my family and I can live with has been challenging. Thank you Vital Energy for my extreme makeover. As for you Ms. Hima, thank you for the time, effort and determination that allowed you to create Vital Energy.” With the knowledge, kindness and courteous help of the therapists at Vital Energy, Lila D. Lecy is one of Vital Energy’s Extreme Makeover success stories.