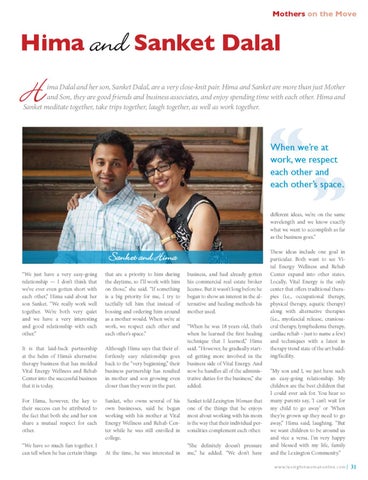 Mothers on the Move

ima Dalal and her son, Sanket Dalal, are a very close-knit pair. Hima and Sanket are more than just Mother and Son, they are good friends and business associates, and enjoy spending time with each other. Hima and Sanket meditate together, take trips together, laugh together, as well as work together.

When we’re at work, we respect each other and each other’s space. different ideas, we’re on the same wavelength and we know exactly what we want to accomplish as far as the business goes.”

that are a priority to him during the daytime, so I’ll work with him on those,” she said. “If something is a big priority for me, I try to tactfully tell him that instead of bossing and ordering him around as a mother would. When we’re at work, we respect each other and each other’s space.”

It is that laid-back partnership at the helm of Hima’s alternative therapy business that has molded Vital Energy Wellness and Rehab Center into the successful business that it is today.

Although Hima says that their effortlessly easy relationship goes back to the “very beginning,” their business partnership has resulted in mother and son growing even closer than they were in the past.

For Hima, however, the key to their success can be attributed to the fact that both she and her son share a mutual respect for each other.

Sanket, who owns several of his own businesses, said he began working with his mother at Vital Energy Wellness and Rehab Center while he was still enrolled in college.

“We have so much fun together. I can tell when he has certain things

business, and had already gotten his commercial real estate broker license. But it wasn’t long before he began to show an interest in the alternative and healing methods his mother used. “When he was 18 years old, that’s when he learned the first healing technique that I learned,” Hima said. “However, he gradually started getting more involved in the business side of Vital Energy. And now he handles all of the administrative duties for the business,” she added. Sanket told Lexington Woman that one of the things that he enjoys most about working with his mom is the way that their individual personalities complement each other. “She definitely doesn’t pressure me,” he added. “We don’t have

These ideas include one goal in particular. Both want to see Vital Energy Wellness and Rehab Center expand into other states. Locally, Vital Energy is the only center that offers traditional therapies (i.e., occupational therapy, physical therapy, aquatic therapy) along with alternative therapies (i.e., myofascial release, craniosacral therapy, lymphedema therapy, cardiac rehab – just to name a few) and techniques with a latest in therapy trend state of the art building/facility. “My son and I, we just have such an easy-going relationship. My children are the best children that I could ever ask for. You hear so many parents say, ‘I can’t wait for my child to go away’ or ‘When they’re grown up they need to go away,” Hima said, laughing. “But we want children to be around us and vice a versa. I’m very happy and blessed with my life, family and the Lexington Community.” www.lexingtonwomanonline.com