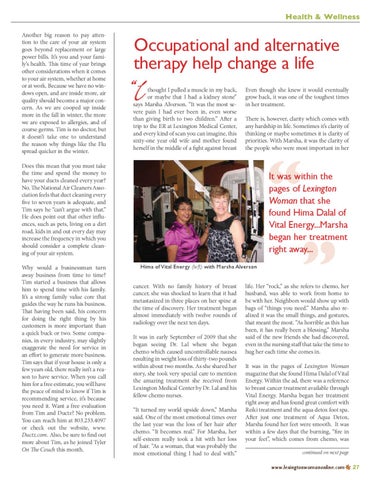 Health & Wellness Another big reason to pay attention to the care of your air system goes beyond replacement or large power bills. It’s you and your family’s health. This time of year brings other considerations when it comes to your air system, whether at home or at work. Because we have no windows open, and are inside more, air quality should become a major concern. As we are cooped up inside more in the fall in winter, the more we are exposed to allergies, and of course germs. Tim is no doctor, but it doesn’t take one to understand the reason why things like the Flu spread quicker in the winter.

thought I pulled a muscle in my back, or maybe that I had a kidney stone” says Marsha Alverson. “It was the most severe pain I had ever been in, even worse than giving birth to two children.” After a trip to the ER at Lexington Medical Center, and every kind of scan you can imagine, this sixty-one year old wife and mother found herself in the middle of a fight against breast

Even though she knew it would eventually grow back, it was one of the toughest times in her treatment. There is, however, clarity which comes with any hardship in life. Sometimes it’s clarity of thinking or maybe sometimes it is clarity of priorities. With Marsha, it was the clarity of the people who were most important in her

Does this mean that you must take the time and spend the money to have your ducts cleaned every year? No. The National Air Cleaners Association feels that duct cleaning every five to seven years is adequate, and Tim says he “can’t argue with that.” He does point out that other influences, such as pets, living on a dirt road, kids in and out every day may increase the frequency in which you should consider a complete cleaning of your air system. Why would a businessman turn away business from time to time? Tim started a business that allows him to spend time with his family. It’s a strong family value core that guides the way he runs his business. That having been said, his concern for doing the right thing by his customers is more important than a quick buck or two. Some companies, in every industry, may slightly exaggerate the need for service in an effort to generate more business. Tim says that if your house is only a few years old, there really isn’t a reason to have service. When you call him for a free estimate, you will have the peace of mind to know if Tim is recommending service, it’s because you need it. Want a free evaluation from Tim and Ductz? No problem. You can reach him at 803.233.4097 or check out the website, www. Ductz.com. Also, be sure to find out more about Tim, as he joined Tyler On The Couch this month.

It was within the pages of Lexington Woman that she found Hima Dalal of Vital Energy...Marsha began her treatment right away... Hima of Vital Energy (left) with Marsha Alverson cancer. With no family history of breast cancer, she was shocked to learn that it had metastasized in three places on her spine at the time of discovery. Her treatment began almost immediately with twelve rounds of radiology over the next ten days. It was in early September of 2009 that she began seeing Dr. Lal where she began chemo which caused uncontrollable nausea resulting in weight loss of thirty-two pounds within about two months. As she shared her story, she took very special care to mention the amazing treatment she received from Lexington Medical Center by Dr. Lal and his fellow chemo nurses. “It turned my world upside down,” Marsha said. One of the most emotional times over the last year was the loss of her hair after chemo. “It becomes real.” For Marsha, her self-esteem really took a hit with her loss of hair. “As a woman, that was probably the most emotional thing I had to deal with.”

life. Her “rock,” as she refers to chemo, her husband, was able to work from home to be with her. Neighbors would show up with bags of “things you need.” Marsha also realized it was the small things, and gestures, that meant the most. “As horrible as this has been, it has really been a blessing,” Marsha said of the new friends she had discovered, even in the nursing staff that take the time to hug her each time she comes in. It was in the pages of Lexington Woman magazine that she found Hima Dalal of Vital Energy. Within the ad, there was a reference to breast cancer treatment available through Vital Energy. Marsha began her treatment right away and has found great comfort with Reiki treatment and the aqua detox foot spa. After just one treatment of Aqua Detox, Marsha found her feet were smooth. It was within a few days that the burning, “fire in your feet”, which comes from chemo, was continued on next page