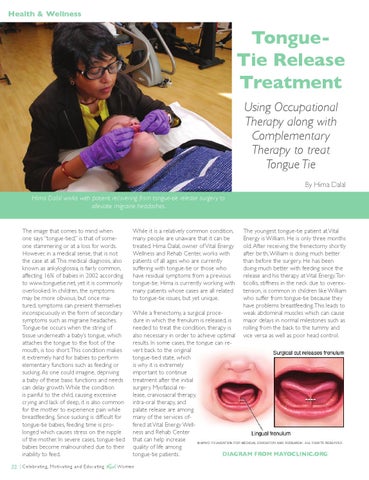 TongueTie Release Treatment Using Occupational Therapy along with Complementary Therapy to treat Tongue Tie By Hima Dalal Hima Dalal works with patient recovering from tongue-tie release surgery to alleviate migraine headaches. The image that comes to mind when one says “tongue-tied,” is that of someone stammering or at a loss for words. However, in a medical sense, that is not the case at all. This medical diagnosis, also known as ankyloglossia, is fairly common, affecting 16% of babies in 2002 according to www.tonguetie.net, yet it is commonly overlooked. In children, the symptoms may be more obvious, but once matured, symptoms can present themselves inconspicuously in the form of secondary symptoms such as migraine headaches. Tongue-tie occurs when the string of tissue underneath a baby’s tongue, which attaches the tongue to the foot of the mouth, is too short. This condition makes it extremely hard for babies to perform elementary functions such as feeding or sucking. As one could imagine, depriving a baby of these basic functions and needs can delay growth. While the condition is painful to the child, causing excessive crying and lack of sleep, it is also common for the mother to experience pain while breastfeeding. Since sucking is difficult for tongue-tie babies, feeding time is prolonged which causes stress on the nipple of the mother. In severe cases, tongue-tied babies become malnourished due to their inability to feed. 22

While it is a relatively common condition, many people are unaware that it can be treated. Hima Dalal, owner of Vital Energy Wellness and Rehab Center, works with patients of all ages who are currently suffering with tongue-tie or those who have residual symptoms from a previous tongue-tie. Hima is currently working with many patients whose cases are all related to tongue-tie issues, but yet unique.

The youngest tongue-tie patient at Vital Energy is William. He is only three months old. After receiving the frenectomy shortly after birth, William is doing much better than before the surgery. He has been doing much better with feeding since the release and his therapy at Vital Energy. Torticollis, stiffness in the neck due to overextension, is common in children like William who suffer from tongue-tie because they have problems breastfeeding. This leads to weak abdominal muscles which can cause major delays in normal milestones such as rolling from the back to the tummy and vice versa as well as poor head control.

While a frenectomy, a surgical procedure in which the frenulum is released, is needed to treat the condition, therapy is also necessary in order to achieve optimal results. In some cases, the tongue can revert back to the original tongue-tied state, which is why it is extremely important to continue treatment after the initial surgery. Myofascial release, craniosacral therapy, intra-oral therapy, and palate release are among many of the services offered at Vital Energy Wellness and Rehab Center that can help increase quality of life among DIAGRAM FROM MAYOCLINIC.ORG tongue-tie patients.