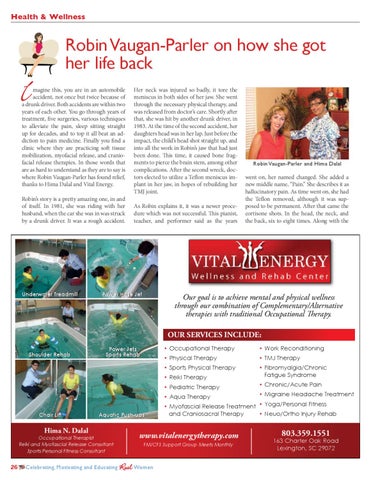 Robin Vaugan-Parler on how she got her life back

magine this, you are in an automobile accident, not once but twice because of a drunk driver. Both accidents are within two years of each other. You go through years of treatment, five surgeries, various techniques to alleviate the pain, sleep sitting straight up for decades, and to top it all beat an addiction to pain medicine. Finally you find a clinic where they are practicing soft tissue mobilization, myofacial release, and craniofacial release therapies. In those words that are as hard to understand as they are to say is where Robin Vaugan-Parler has found relief, thanks to Hima Dalal and Vital Energy. Robin’s story is a pretty amazing one, in and of itself. In 1981, she was riding with her husband, when the car she was in was struck by a drunk driver. It was a rough accident.

Her neck was injured so badly, it tore the meniscus in both sides of her jaw. She went through the necessary physical therapy, and was released from doctor’s care. Shortly after that, she was hit by another drunk driver, in 1983. At the time of the second accident, her daughters head was in her lap. Just before the impact, the child’s head shot straight up, and into all the work in Robin’s jaw that had just been done. This time, it caused bone fragments to pierce the brain stem, among other complications. After the second wreck, doctors elected to utilize a Teflon meniscus implant in her jaw, in hopes of rebuilding her TMJ joint. As Robin explains it, it was a newer procedure which was not successful. This pianist, teacher, and performer said as the years

Robin Vaugan-Parler and Hima Dalal went on, her named changed. She added a new middle name, “Pain.” She describes it as hallucinatory pain. As time went on, she had the Teflon removed, although it was supposed to be permanent. After that came the cortisone shots. In the head, the neck, and the back, six to eight times. Along with the

Our goal is to achieve mental and physical wellness through our combination of Complementary/Alternative therapies with traditional Occupational Therapy. OUR SERVICES INCLUDE: