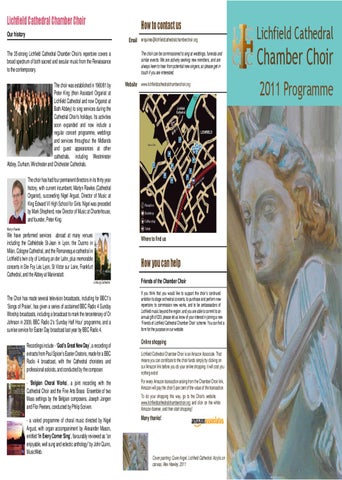 The 35-strong Lichfield Cathedral Chamber Choir's repertoire covers a broad spectrum of both sacred and secular music from the Renaissance to the contemporary. The choir was established in 1980/81 by Peter King (then Assistant Organist at Lichfield Cathedral and now Organist at Bath Abbey) to sing services during the Cathedral Choir's holidays. Its activities soon expanded and now include a regular concert programme, weddings and services throughout the Midlands and guest appearances at other cathedrals, including Westminster Abbey, Durham, Winchester and Chichester Cathedrals.

enquiries@lichfieldcathedralchamberchoir.org The choir can be commissioned to sing at weddings, funerals and similar events. We are actively seeking new members, and are always keen to hear from potential new singers, so please get in touch if you are interested.

We have performed services abroad at many venues including the Cathédrale St-Jean in Lyon, the Duomo in Milan, Cologne Cathedral, and the Romanesque cathedral in Lichfield’s twin city of Limburg an der Lahn, plus memorable concerts in Ste Foy Lès Lyon, St Victor sur Loire, Frankfurt Cathedral, and the Abbey at Marienstatt.

Where to find us

How you can help Limburg Cathedral

The Choir has made several television broadcasts, including for BBC1’s ‘Songs of Praise’, has given a series of acclaimed BBC Radio 4 Sunday Worship broadcasts, including a broadcast to mark the tercentenary of Dr Johnson in 2009, BBC Radio 2’s ‘Sunday Half Hour’ programme, and a sunrise service for Easter Day broadcast last year by BBC Radio 4. Recordings include - ‘God’s Great New Day’, a recording of extracts from Paul Spicer’s Easter Oratorio, made for a BBC Radio 4 broadcast, with the Cathedral choristers and professional soloists, and conducted by the composer. - ‘Belgian Choral Works’, a joint recording with the Cathedral Choir and the Fine Arts Brass Ensemble of two Mass settings by the Belgian composers, Joseph Jongen and Flor Peeters, conducted by Philip Scriven. - a varied programme of choral music directed by Nigel Argust, with organ accompaniment by Alexander Mason, entitled ‘In Every Corner Sing’, favourably reviewed as “an enjoyable, well sung and eclectic anthology” by John Quinn, MusicWeb.

Friends of the Chamber Choir If you think that you would like to support the choir’s continued ambition to stage orchestral concerts, to purchase and perform new repertoire, to commission new works, and to be ambassadors of Lichfield music beyond the region, and you are able to commit to an annual gift of £20, please let us know of your interest in joining a new ‘Friends of Lichfield Cathedral Chamber Choir’ scheme. You can find a form for the purpose on our website.

Online shopping Lichfield Cathedral Chamber Choir is an Amazon Associate. That means you can contribute to the choir funds simply by clicking on our Amazon link before you do your online shopping: it will cost you nothing extra! For every Amazon transaction arising from the Chamber Choir link, Amazon will pay the choir 5 per cent of the value of the transaction. To do your shopping this way, go to the Choir's website, www.lichfieldcathedralchamberchoir.org and click on the white Amazon banner, and then start shopping!

Looking back at 2010... Spring 2010 was marked by a performance of the ever-popular Crucifixion by John Stainer for Holy Week, and a broadcast of a Sunrise Service for Easter Morning on BBC Radio 4, recorded at the National Memorial Arboretum. In the summer, the Chamber Choir presented two July concerts in the cathedral: an exciting programme of music with an American flavour, A taste of the New World; and a late evening concert in the Lichfield Festival, presenting a programme of English and Spanish renaissance works. The highlight of a busy Autumn schedule was undoubtedly the choir’s November concert, For All the Saints, with a varied programme, including works by Byrd, Britten, Bruckner, Pärt and Rubbra. A popular innovation for both this concert and the summer concert was to provide themed interval refreshments.

Looking ahead... 2011 has already got off to an exciting start with the Chamber Choir’s involvement in the highly successful Psalmathon in February, which has raised over £10,000 for the East End Appeal. We are very pleased to be once again performing a short late evening concert in the Lichfield Festival on 15th July - tickets from the Box Office. In November, we will be staging an orchestral concert, renewing our relationship with the excellent DECO chamber orchestra. Look out for publicity in the Autumn, and check out the choir’s website, www.lichfieldcathedralchamberchoir.org

The Choir’s concert for St Cecilia Tide will again feature the excellent DECO orchestra, in a programme of Bach (‘Der Herr denket an uns’), Handel (‘Let God Arise’) and Schubert (Mass in G).

15th Lichfield Festival Concert 10pm, Lichfield Cathedral To mark the 400th anniversary of the death of the Spanish Renaissance composer Tomas Luis de Victoria, the Chamber Choir performs one of his greatest masterpieces, his Requiem mass (‘Officium Defunctorum’). The intimate, late night setting of the Cathedral Lady Chapel, lit by candlelight, provides an ideal backdrop for this work of solemn beauty. Tickets (£10) available from the box office, or online. Check www.lichfieldfestival.org for details.

Sequence of words and music for Christmas, 7.30pm, Lichfield Cathedral