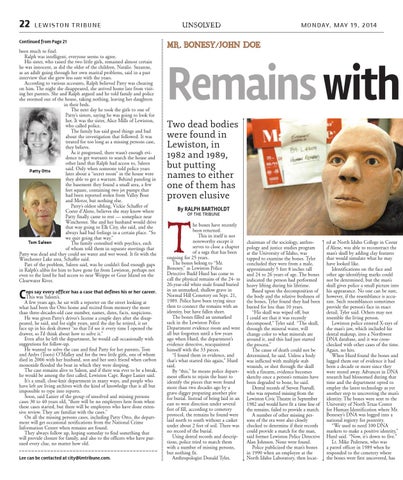 been much to find. Ralph was intelligent, everyone seems to agree. His sister, who raised the two little girls, remained almost certain he was innocent, as did the older of the children, Natalie. Suzanne, as an adult going through her own marital problems, said in a past interview that she grew less sure with the years. According to various accounts, Ralph believed Patty was cheating on him. The night she disappeared, she arrived home late from visiting her parents. She and Ralph argued and he told family and police she stormed out of the house, taking nothing, leaving her daughters in their beds. The next day he took the girls to one of Patty’s sisters, saying he was going to look for her. It was the sister, Alice Mills of Lewiston, who called police. The family has said good things and bad about the investigation that followed. It was treated for too long as a missing persons case, they believe. As it progressed, there wasn’t enough evidence to get warrants to search the house and other land that Ralph had access to, Saleen said. Only when someone told police years Patty Otto later about a “secret room” in the house were they able to get a warrant. Behind paneling in the basement they found a small area, a few feet square, containing two jet pumps that had been reported stolen from Valley Boat and Motor, but nothing else. Patty’s oldest sibling, Vickie Schaffer of Coeur d’Alene, believes she may know where Patty finally came to rest — someplace near Winchester. She and her husband would drive that way going to Elk City, she said, and she always had bad feelings in a certain place. “So we quit going that way.” Tom Saleen The family consulted with psychics, each of whom told them in separate meetings that Patty was dead and they could see water and wet wood. It fit with the Winchester Lake area, Schaffer said. Part of the problem, Saleen said, was he couldn’t find enough gaps in Ralph’s alibis for him to have gone far from Lewiston, perhaps not even to the land he had access to near Weippe or Goat Island on the Clearwater River.

ops say every officer has a case that defines his or her career. This was Saleen’s. A few years ago, he sat with a reporter on the street looking at what had been the Otto home and recited from memory the more than three-decades-old case number, names, dates, facts, suspicions. He was given Patty’s driver’s license a couple days after she disappeared, he said, and for eight years, until the day he retired, it set face up in his desk drawer “so that I’d see it every time I opened the drawer, so I’d think about how to solve it.” Even after he left the department, he would call occasionally with suggestions for follow-up. He wanted to solve the case and find Patty for her parents, Tom and Ardys (Toots) O’Malley and for the two little girls, one of whom died in 2006 with her husband, son and her son’s friend when carbon monoxide flooded the boat in which they were sleeping. The case remains alive to Saleen, and if there was ever to be a break, he would be among the first called, Lewiston Capt. Roger Lanier said. It’s a small, close-knit department in many ways, and people who have left are living archives with the kind of knowledge that is all but impossible to type into reports. Soon, said Lanier of the group of unsolved and missing persons cases 30 to 40 years old, “there will be no employees here from when these cases started, but there will be employees who have done extensive review. They are familiar with the cases.” On all the missing persons cases, including Patty Otto, the department will get occasional notifications from the National Crime Information Center when remains are found. They always follow up, hoping someday to find something that will provide closure for family, and also to the officers who have pursued every clue, no matter how old. Lee can be contacted at city@lmtribune.com.

Remains with Two dead bodies were found in Lewiston, in 1982 and 1989, but putting names to either one of them has proven elusive By RALPH BARTHOLDT

he bones have recently been returned. This in itself is not noteworthy except it serves to close a chapter of a saga that has been ongoing for 25 years. The bones belong to “Mr. Bonesey,” as Lewiston Police Detective Budd Hurd has come to call the physical remains of the 24- to 26-year-old white male found buried in an unmarked, shallow grave in Normal Hill Cemetery on Sept. 21, 1989. Police have been trying since then to connect the remains with an identity, but have fallen short. The bones filled an unmarked sack in the Lewiston Police Department evidence room and were all but forgotten until a few years ago when Hurd, the department’s evidence detective, reacquainted himself with the 33 pieces. “I found them in evidence, and that’s what started this again,” Hurd said. By “this,” he means police department efforts to rejoin the hunt to identify the pieces that were found more than two decades ago by a grave digger preparing another plot for burial. Instead of being laid in an east to west direction under several feet of fill, according to cemetery protocol, the remains he found were laid north to south without a casket under about 2 feet of soil. There was no record of the burial. Using dental records and descriptions, police tried to match them with a number of missing persons, but nothing fit. Anthropologist Donald Tyler,

chairman of the sociology, anthropology and justice studies program at the University of Idaho, was tapped to examine the bones. Tyler concluded they were from a male, approximately 5 feet 8 inches tall and 24 to 26 years of age. The bones indicated the person had performed heavy lifting during his lifetime. Based upon the decomposition of the body and the relative freshness of the bones, Tyler found they had been buried for less than 10 years. “His skull was wiped off, but I could see that it was recently decomposed,” Tyler said. “The skull, through the mineral water, will change color to what minerals are around it, and this had just started the process.” The cause of death could not be determined, he said. Unless a body was inflicted with multiple stab wounds, or shot through the skull with a firearm, evidence becomes sketchy once a person’s remains have been degraded to bone, he said. Dental records of Steven Pearsall, who was reported missing from the Lewiston Civic Theatre in September 1982 and would have fit a time line of the remains, failed to provide a match. A number of other missing persons of the era were also closely checked to determine if their records could provide a match for the man, said former Lewiston Police Detective Alan Johnson. None were found. Police publicized the man’s bones in 1990 when an employee at the North Idaho Laboratory, then locat-

ed at North Idaho College in Coeur d’Alene, was able to reconstruct the man’s skull by adding clay features that would simulate what he may have looked like. Identifications on the face and other age-identifying marks could not be determined, but the man’s skull gives police a small picture into his appearance. No one can be sure, however, if the resemblance is accurate. Such resemblances sometimes provide the person’s face in exact detail, Tyler said. Others may not resemble the living person. Lewiston police entered X-rays of the man’s jaw, which included his dental makeup, into a Northwest DNA database, and it was crosschecked with other cases of the time. Again, no hits. When Hurd found the bones and lugged them out of evidence it had been a decade or more since they were stored away. Advances in DNA research had blossomed during that time and the department opted to employ the latest technology as yet another step to uncovering the man’s identity. The bones were sent to the University of North Texas Center for Human Identification where Mr. Bonesey’s DNA was logged into a national registry for posterity. “We used to need 100 DNA markers to make a positive identity,” Hurd said. “Now, it’s down to five.” Lt. Mike Pedersen, who was a patrol officer in 1989 when he responded to the cemetery where the bones were first uncovered, has

A special report on 19 unsolved murders in the Lewiston Tribune readership area. 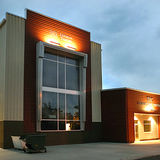