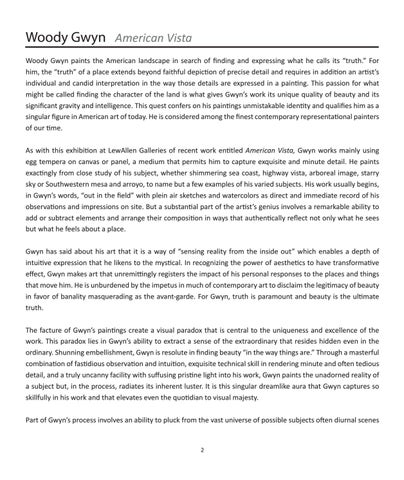 Woody Gwyn American Vista Woody Gwyn paints the American landscape in search of finding and expressing what he calls its “truth.” For him, the “truth” of a place extends beyond faithful depiction of precise detail and requires in addition an artist’s individual and candid interpretation in the way those details are expressed in a painting. This passion for what might be called finding the character of the land is what gives Gwyn’s work its unique quality of beauty and its significant gravity and intelligence. This quest confers on his paintings unmistakable identity and qualifies him as a singular figure in American art of today. He is considered among the finest contemporary representational painters of our time. As with this exhibition at LewAllen Galleries of recent work entitled American Vista, Gwyn works mainly using egg tempera on canvas or panel, a medium that permits him to capture exquisite and minute detail. He paints exactingly from close study of his subject, whether shimmering sea coast, highway vista, arboreal image, starry sky or Southwestern mesa and arroyo, to name but a few examples of his varied subjects. His work usually begins, in Gwyn’s words, “out in the field” with plein air sketches and watercolors as direct and immediate record of his observations and impressions on site. But a substantial part of the artist’s genius involves a remarkable ability to add or subtract elements and arrange their composition in ways that authentically reflect not only what he sees but what he feels about a place. Gwyn has said about his art that it is a way of “sensing reality from the inside out” which enables a depth of intuitive expression that he likens to the mystical. In recognizing the power of aesthetics to have transformative effect, Gwyn makes art that unremittingly registers the impact of his personal responses to the places and things that move him. He is unburdened by the impetus in much of contemporary art to disclaim the legitimacy of beauty in favor of banality masquerading as the avant-garde. For Gwyn, truth is paramount and beauty is the ultimate truth. The facture of Gwyn’s paintings create a visual paradox that is central to the uniqueness and excellence of the work. This paradox lies in Gwyn’s ability to extract a sense of the extraordinary that resides hidden even in the ordinary. Shunning embellishment, Gwyn is resolute in finding beauty “in the way things are.” Through a masterful combination of fastidious observation and intuition, exquisite technical skill in rendering minute and often tedious detail, and a truly uncanny facility with suffusing pristine light into his work, Gwyn paints the unadorned reality of a subject but, in the process, radiates its inherent luster. It is this singular dreamlike aura that Gwyn captures so skillfully in his work and that elevates even the quotidian to visual majesty. Part of Gwyn’s process involves an ability to pluck from the vast universe of possible subjects often diurnal scenes