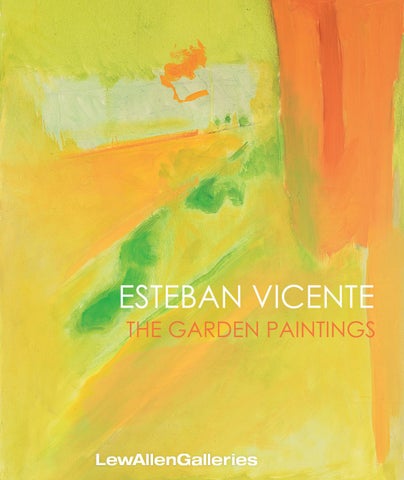 Esteban Vicente The Garden Paintings Esteban Vicente is today considered one of the most distinguished figures of American abstract painting. He was born in Spain in 1903 and classically educated in drawing, sculpture and works of the Old Masters at the Royal Academy of Art in Madrid. He lived in Paris and Barcelona during the late 1920s and ‘30s where he was exposed to cutting-edge currents of European modernism and knew Picasso, Max Ernst and Raoul Dufy. In 1936, in the midst of the Spanish Civil War, he moved to New York where he became a member of the “inside club” of the New York School of artists. Prior to his death in 2001, Vicente innovated and produced a remarkable body of work that ranged from drawings and collage to sculpture and, most prominently, beautiful, luminous paintings. The well-known art critic, Roberta Smith, wrote in her New York Times obituary of Vicente that his work “seemed to mirror his innate elegance.” That statement – the word “elegance” – aptly describes the essential quality of graceful delicacy and peaceful beauty that emanates from the fifteen late-career oil on canvas paintings that comprise LewAllen Galleries’ exhibition of work by this legendary first generation New York School painter. These paintings belong to a group of work that has become known as the Garden Paintings. Each evokes an ethereal sense of landscape and especially the gentle colors of the artist’s beloved floral garden, which inspired in him a remarkable fluency with light and color as an articulate language of emotional expression. That garden, a part of the Bridgehampton, New York home where he lived and worked for more than three decades, was Vicente’s own Giverny. It was a glorious place of contemplation and reflection where, to paraphrase Samuel Taylor Coleridge, the English romantic poet, Vicente made his art as a kind of “mediatress between, and reconciler of, nature and man.” Indeed, it was in this garden that the thoughts and passions of this towering figure of American abstract painting came together and were imbued into his own poetic painting. In these works, the artist creates his singular unity of thoughts, feelings, and observations that touched him deeply in this place of peaceful quiet and resplendent color. For Vicente, these paintings were, as William Wordsworth said of poetry, “the spontaneous overflow of powerful feelings that take their origin in emotion and are recollected in tranquility.” They memorialize for eternity the bliss of moments. It might seem surprising, though, that the work of an artist widely recognized as an important figure of Abstract Expressionism should bring to mind the words of Romantic poets. But, as the exquisite paintings in this exhibition clearly demonstrate, whatever else he was, Vicente was manifestly – like those poets – a man of refined romantic sentiments who loved nature and found deep meaning within it. These canvases are poignant and powerful examples of Vicente’s remarkable capacity 2

to make his art that “mediatress” of nature, and to infuse into enduring works his embracing experience of its beauty. Though Vicente is today regarded as one of the finest masters of contemporary color abstraction, he was also, at the time of his death in 2001, one of the last surviving members of the group of New York School AbEx luminaries that included the likes of Jackson Pollock, Willem de Kooning, Mark Rothko, Franz Kline, Barnett Newman, and many others with whom he was closely associated in the ‘40s and ‘50s. He once shared a floor of studio space with de Kooning and long maintained a working presence on East 10th Street in Manhattan, then the center of the New York art world, where many of the other prominent figures of Abstract Expressionism had their studios. Indeed, in 1950, Vicente was chosen by critics Clement Greenberg and Meyer Shapiro to exhibit in the important “Talent 1950” exhibition at the Sam Kootz Gallery and was described by Harold Rosenberg as “one of the leaders in creating and disseminating” Abstract Expressionism. His work was showcased by such legendary New York gallerists as Andre Emmerich and Leo Castelli. Despite his close involvement with the Abstract Expressionist movement, Vicente always possessed a rigorously individual artistic voice that was richly informed by a diversity of influences. Vicente’s work was arguably more intellectual, sensitive and refined than it was abjectly egoistic like that of many of his contemporaries. His paintings synthesized innovations associated with the New York School as well as European modernist masters such as Matisse, but always reflected primarily his own profound views concerning the expressive power of abstract art. His embrace of solitude, modest temperament, and trust in the efficacy of his own intuition, combined to have the strongest influence on his work. Vicente was immersed in the foundations of 20th century avant-garde American art. With a career that spanned more than 70 years and brought together a wide range of influences – from Spanish romanticism and the Baroque to Cubism and Abstract Expressionism – he became what his biographer, Elizabeth Frank, described as “that legendary character, the painter in old age, to whom everything remains available: memory, feeling, invention, mastery of means.” In the process he created some of the most fully refined, highly individualistic, and enduringly beautiful abstract paintings that uniquely transform color, light and materials into totems of spiritual transcendence. As he grew older, his inclination toward elegance became paramount in his work. These Garden Paintings display an especially personal sense of the artist’s feeling about nature’s beauty that is 3

both evocative and ambiguous, entirely devoid of the agitated gestures, dense viscosities, spleenventing splatters and drips associated with many Abstract Expressionists of the ‘40s and ‘50s – what, when he tired of it, Clement Greenberg referred to as its “flurry of strokes, blotches and trickles of paint.” Beginning in the mid-‘60s, Vicente took color, form, and light as subjects and the means of structuring his paintings. He keyed colors to memories and feelings and most often sourced the colors from his beloved garden of flowers in sunny Bridgehampton, as well as from his long admiration of Matisse, the Impressionists and Post-Impressionists. His compositions opened as though in gracious welcome and his colorations possessed a tonal gentleness and a comforting sense of contemplative grace. In the 1990s, Vicente was nearing the end of a long life (he was in his 90s), but still quite actively painting and experimenting. During this time he created these wellregarded, ethereal Garden Paintings, inspired by the view from his painting studio of his expansive garden in which he’d planted phlox, poppies, day lilies, helianthus, foxgloves, daisies and morning glories. The colors of these flowers inhabit his canvases like after-images and resonate enduringly the deep and complex emotions they elicited in him. These are major encomiums to his lasting legacy. Indeed, by the 1990s when he made these vivacious Garden Paintings, Vicente’s work had reached a pinnacle. The forms and colors had attained an ethereal, even spectral presence, offering a sense of the profoundly meditative. They emanate an aura of tranquility in the way a Coleridge or Wordsworth poem, read softly, might do. And they possess that aspect of elegance not surprising in the work of this quiet, modest, dapper man of aristocratic Spanish bearing. The works in this exhibition represent Vicente’s mature evolution as an artist. The paintings proclaim a deep love of beauty yet the images are alluringly ambiguous and fluid, their content evocative but never mimetic. They have the freshness and vitality that only great masters possess. There is a revivifying sense of equanimity about these nuanced paintings, a gentle joviality that is both enlivening and peaceful. Their bright open factures are inviting, even seductive, with ethereal hues of subtle colorations and floating forms that waft enticingly from their luminous surfaces. Like apparitions of an impossible beauty, they activate the imagination and offer a sense of transcendence that might transport a viewer’s heart and soul into private worlds of joyfulness the artist delights in sharing. At the hand of an artist near the end of his life but clearly in command of his expression, these paintings seem made with a quiet confidence and clarity of passion – a passion the artist delights in sharing. At the hand of an artist near the end of his life but clearly in 4

of his expression, these paintings seem made with a quiet confidence and clarity of passion – a true “innate elegance” – that is both reassuring and invigorating. Kenneth R. Marvel

Esteban Vicente in his garden in Bridgehampton, NY