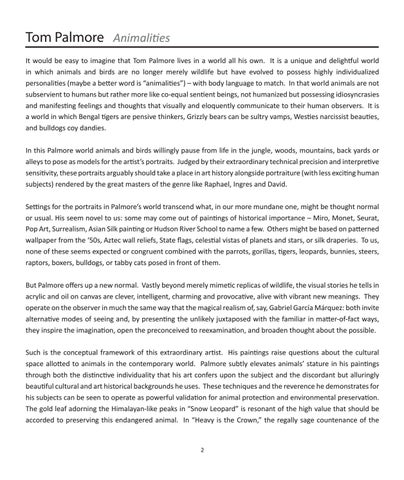 Tom Palmore Animalities It would be easy to imagine that Tom Palmore lives in a world all his own. It is a unique and delightful world in which animals and birds are no longer merely wildlife but have evolved to possess highly individualized personalities (maybe a better word is “animalities”) – with body language to match. In that world animals are not subservient to humans but rather more like co-equal sentient beings, not humanized but possessing idiosyncrasies and manifesting feelings and thoughts that visually and eloquently communicate to their human observers. It is a world in which Bengal tigers are pensive thinkers, Grizzly bears can be sultry vamps, Westies narcissist beauties, and bulldogs coy dandies. In this Palmore world animals and birds willingly pause from life in the jungle, woods, mountains, back yards or alleys to pose as models for the artist’s portraits. Judged by their extraordinary technical precision and interpretive sensitivity, these portraits arguably should take a place in art history alongside portraiture (with less exciting human subjects) rendered by the great masters of the genre like Raphael, Ingres and David. Settings for the portraits in Palmore’s world transcend what, in our more mundane one, might be thought normal or usual. His seem novel to us: some may come out of paintings of historical importance – Miro, Monet, Seurat, Pop Art, Surrealism, Asian Silk painting or Hudson River School to name a few. Others might be based on patterned wallpaper from the ‘50s, Aztec wall reliefs, State flags, celestial vistas of planets and stars, or silk draperies. To us, none of these seems expected or congruent combined with the parrots, gorillas, tigers, leopards, bunnies, steers, raptors, boxers, bulldogs, or tabby cats posed in front of them. But Palmore offers up a new normal. Vastly beyond merely mimetic replicas of wildlife, the visual stories he tells in acrylic and oil on canvas are clever, intelligent, charming and provocative, alive with vibrant new meanings. They operate on the observer in much the same way that the magical realism of, say, Gabriel García Márquez: both invite alternative modes of seeing and, by presenting the unlikely juxtaposed with the familiar in matter-of-fact ways, they inspire the imagination, open the preconceived to reexamination, and broaden thought about the possible. Such is the conceptual framework of this extraordinary artist. His paintings raise questions about the cultural space allotted to animals in the contemporary world. Palmore subtly elevates animals’ stature in his paintings through both the distinctive individuality that his art confers upon the subject and the discordant but alluringly beautiful cultural and art historical backgrounds he uses. These techniques and the reverence he demonstrates for his subjects can be seen to operate as powerful validation for animal protection and environmental preservation. The gold leaf adorning the Himalayan-like peaks in “Snow Leopard” is resonant of the high value that should be accorded to preserving this endangered animal. In “Heavy is the Crown,” the regally sage countenance of the