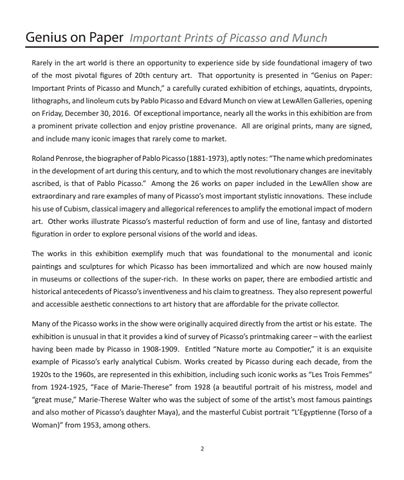 Genius on Paper Important Prints of Picasso and Munch Rarely in the art world is there an opportunity to experience side by side foundational imagery of two of the most pivotal figures of 20th century art. That opportunity is presented in “Genius on Paper: Important Prints of Picasso and Munch,” a carefully curated exhibition of etchings, aquatints, drypoints, lithographs, and linoleum cuts by Pablo Picasso and Edvard Munch on view at LewAllen Galleries, opening on Friday, December 30, 2016. Of exceptional importance, nearly all the works in this exhibition are from a prominent private collection and enjoy pristine provenance. All are original prints, many are signed, and include many iconic images that rarely come to market. Roland Penrose, the biographer of Pablo Picasso (1881-1973), aptly notes: “The name which predominates in the development of art during this century, and to which the most revolutionary changes are inevitably ascribed, is that of Pablo Picasso.” Among the 26 works on paper included in the LewAllen show are extraordinary and rare examples of many of Picasso’s most important stylistic innovations. These include his use of Cubism, classical imagery and allegorical references to amplify the emotional impact of modern art. Other works illustrate Picasso’s masterful reduction of form and use of line, fantasy and distorted figuration in order to explore personal visions of the world and ideas. The works in this exhibition exemplify much that was foundational to the monumental and iconic paintings and sculptures for which Picasso has been immortalized and which are now housed mainly in museums or collections of the super-rich. In these works on paper, there are embodied artistic and historical antecedents of Picasso’s inventiveness and his claim to greatness. They also represent powerful and accessible aesthetic connections to art history that are affordable for the private collector. Many of the Picasso works in the show were originally acquired directly from the artist or his estate. The exhibition is unusual in that it provides a kind of survey of Picasso’s printmaking career – with the earliest having been made by Picasso in 1908-1909. Entitled “Nature morte au Compotier,” it is an exquisite example of Picasso’s early analytical Cubism. Works created by Picasso during each decade, from the 1920s to the 1960s, are represented in this exhibition, including such iconic works as “Les Trois Femmes” from 1924-1925, “Face of Marie-Therese” from 1928 (a beautiful portrait of his mistress, model and “great muse,” Marie-Therese Walter who was the subject of some of the artist’s most famous paintings and also mother of Picasso’s daughter Maya), and the masterful Cubist portrait “L’Egyptienne (Torso of a Woman)” from 1953, among others. 2

Picasso and Munch: Genius on Paper

Picasso and Munch: Genius on Paper