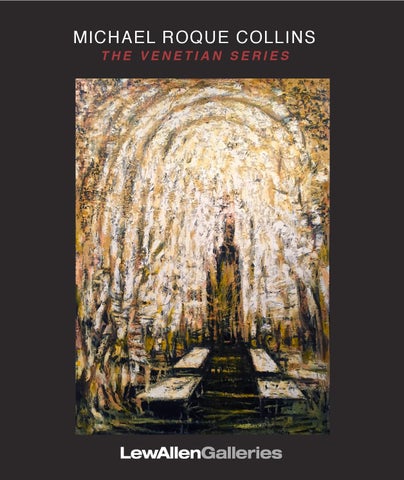 “A ghost upon the sands of the sea … so quietly—so bereft of all but her loveliness, that we might well doubt, as we watch her faint reflection in the mirages of the lagoon, which was the City and which the Shadow.”

It is, indeed, within the image of Venice—the “faint reflection” of a glorious but irredeemable past—that its contemporary reality attains the elusive but vigorous efficacy it possesses today to beguile and inspire. The “real” Venice now resides mainly in its breathtaking beauty, enigmatically enduring in what some call a decaying relic. Once a glorious and powerful maritime republic, Venice diminished as an economic and military capital with the ascendency of other Mediterranean and European states, concluding with its ignominious surrender to Napoleon in 1797.

values, ideas and beliefs, the acclaimed symbolist and expressionist painter Michael Roque Collins has created a striking new body of evocative oil paintings on canvas that allude to Venetian architecture and sacred spaces to create allegorical visions for the potential of a similar human transcendence from enduring meanings within human existence. These works are assembled in Collin’s latest solo exhibition at LewAllen Galleries entitled The Venetian Series. In this new series, Collins’ restive imagination grapples with relationships between building and decay, success and failure, darkness and light, life and death, in order to suggest parallels between the experience of a city and opportunity for man. Venice’s own symbiotic phases of triumph and decline, decay and regeneration, provide the inspiration for his ambiguous and seductive portrayals of the city and aspects of its modern-day mythology. Packed with allusive notions of spiritual transcendence, Collins’ new Venetian Series provides veiled allegories illustrating how adversity and hope can combine to offer regeneration for the spirit of a city as well as that of man.

This decline left its once proud citizenry despondent and, in the words of a 16th century Doge, feeling “abandoned by God [and] in a state of gloom … wretchedly beaten.” However, the social, cultural and psychological void left by this new “reality” gradually was replaced by a myth so infused from and resonant of its remembered glory that it has made Venice a place of nearly unrivaled seductive artistic impulse. This complex and romantic set of stories and traditions are cloaked in veils of exoticism and mystery, commemorating a noble if largely lost past and illuminating the power of shared ideas to sustain and energize a people.

The paintings are based upon deep engagement by Collins in the city and its mythic significance. They constitute powerfully metaphoric glimpses of the acclaimed symbolist’s intermediation of Venice’s mysteries and meanings. As with the city’s mythic reflection in its lagoons, Collin’s new works are shimmerances of Venice’s architecture, objects and ideas. They demonstrate how the most poignant and affecting reality may reside in the artistic dream of a place. The feeling of these images suggests, as the Narrator of Proust’s In Search of Lost Time

The evolution of Venice’s myth elevates the significance of its “Shadow”—this “ghost upon the sands of the sea”—fused into a mythic unity formed from its historic antinomies— its unprecedented glories and the humiliating dissipations. Through its myth, Venice is lifted above the remnants of its past, freed from an enslaving consciousness of its decline, and given a powerful and enduring meaning for the future. Using this example of a city’s regeneration through a shared narrative of 2

observes, dream can have the alarming clarity of consciousness and consciousness the unreality of dream. In the blur between the two are located the seeds of creative genius.

and the imagination are generally more attracted by the nebulous distance than by what is clearly visible close at hand.” So it is for Collins whose symbolic acuity is attained from a meditative remove even in the midst physically of present-day architecture and lagoons. The power of his images resonates from the ambiguous ideas of a past Venetian primacy rather than only the specific artifacts of its former greatness. His rapturously sensuous evocations imply rather than declare, wrapped in rich textures and intoxicating color and drenched in veils of pigmented mystery. Collins regards Venice and its myth as an elegantly worn mirror into which he gazes to discover glimpses of a more vivid inner reality, both for himself and, by means of his enigmatic new paintings, for all people.

Working with a visual language drawn from the pinnacle of human faculties, the imagination, Collins has produced breathtaking new works that forcefully resonate Venice’s mythic paradoxes within his intuitive vision of those present in the human condition. From his deep immersion into the architecture, light, water and lore of La Serenissima, Collins extrapolates arrays of entropic forces for which he finds parallels in life. Recalling Ruskin’s vivid image of Venice’s “ghost upon the sands of the sea,” the painted work of Michael Collins extends beyond verisimilitude and into a mystical realm that brings objects of the past—architecture, canals, crypts, altars, and certainly ideas—into an intense new realm of metaphorical life. It is in this recondite fusing of past and present —between dream and vision—that creative magination most vividly dwells. Emanating out of his artistic journey into the mysteries of the Venetian aura are veiled but compelling visual insights suggestive of the poetic rather than the narrative. His means are only indirectly historical or observational, intermediated by the intuitive and derived from some primal and ambiguous flurry among study, memory, dream and imagining. Though an acute observer of the structures, colors and stones of this fabled city, Collins expresses a vision that lies beyond what his eyes sense. His is a sight of poetic apprehension, and the visual representations of what he sees are draped in a blurred ambiguity between the observed and its rendition. This is Collins’ means of expression and it elevates visual testimony into infinite truth and spiritual transcendence outside the capacities of human reason alone. He approaches Venice with crisp mind and a loving heart. His work epitomizes the notion of 19th century German Romantic painter Caspar David Friedrich that “The eye

Through the captivating looking glass that is Collin’s prophetic view, Venice and its tumult of conquests and defeats is seen to reveal allegorical similes for the human journey. In “Bearing the Tide,” for example, the artist references a tenebrous allusion to formerly imposing structures on the Dogana, a tongue of land separating the Grand Canal from that of the Guidecca. In the face of rising seas threatening the citadel, Collins introduces a lightening sky above the storm to create the vista of an illuminant hope. The painting invites remembered comparison to the transcending effect of the Enlightenment in man’s bleak cultural history prior to its dawning in the 18th century. By extension, it also provides a powerful reminder of how personal enlightenment, through knowledge, education and reason, can overcome the perils of ignorance’s despondent darkness.

of struggle, hope, faith, discovery and enlightenment, and leading toward personal resolution and spiritual wellbeing. His visual allegories often connect the foundational idea within the Venetian myth—endurance in face of destruction—with similar human possibilities. “Adrift in the Dogana,” for example, interrelates a vibrant sunset, the calm after a storm, and a solitary figure floating in still water bathed in the bright illumination of the setting sun. This content vividly suggests the redemptive potential of man’s capacity to suffer into truth, to prevail despite the adversities of life and to find peace and transcendence at the literal end of the day. The painting is a powerful illustration of thematic constructs embedded within the Venetian legacy, providing instructive allegory for the journey of human life. By the ubiquitous reference in his Venetian Series paintings to the iconography of Venice and the remnants of this once-great city—its sacred architecture, pulpits, naves, altars, and waterways—Collins confers upon these works suggestions of the potential within human struggle for the making of something better, whether in this world or a spiritual one. By fashioning his paintings as visual echoes of Venice’s own regeneration of meaning, Collins proposes the possibility of new light at the edge of human darkness for resurrection of the human spirit. Here, by alluding to the light of Venice, Collins’ new paintings reveal a beacon of hope for the human condition with images that symbolize the possibility of rebirth, growth, and enlightenment. His paintings communicate the idea that hope and renewal grows out of moments of tumult and creative engagement with the splenetic. As a city remakes itself from the stones of its past, so too can mankind find redemption in the illuminant and examined journey of life.

Michael Roque Collins has created a striking new body of evocative oil paintings on canvas that allude to Venetian architecture and sacred spaces to create allegorical visions for the potential of a similar human transcdence from enduring meanings within human existence. As with most paintings created by Collins during a productive career now spanning more than 40 years, the works in the Venetian Series present spaces that render the physical while evoking the psychological. Majestic scenes of Venice’s monuments and its ephemeral coexistence with the sea symbolize the ultimate state of man, a journey into the subconscious and conscious, where the permanent and the transitory are in constant struggle. Each painting uses Venice’s entropies and tensions — both those of stone and of the heart—to evolve symbols of strife within the human condition. From these, Collins evolves metaphorical imagery suggesting the possibility of transcendencs coming through an inspired convergence