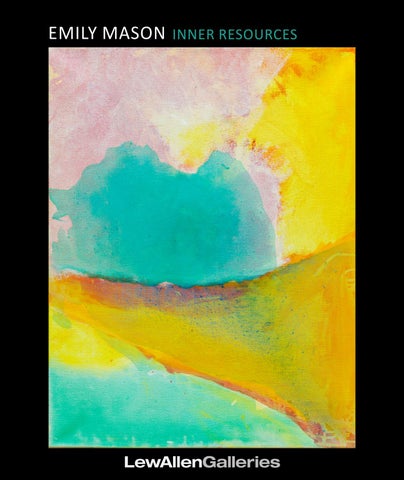 Emily Mason Inner Resources To look with slow regard at the prismatic elegance of an Emily Mason painting is to become caught in a remarkable rapturous intimacy. In her engaging compositions, the gentle waft of rich colors combine with the dulcet interplay of paint densities to reflect the traceries of an artistic life well led. It is a life in which her deep love of art reigns supreme, and the paintings she makes are a kind of sharing of that life. To paraphrase Albert Camus, her work reveals that Mason has “lived without restraint on beauty,” and it is clear that a refined aesthetic impulse is very much her “eternal bread.” Mason’s paintings demonstrate an elegant inner repose combined with a rhapsodic sense of delight, both very much aspects of the artist’s own being. Like her, the work she makes radiates an inner beauty that sustains an enduring joy for those observing. Now in her mid-80s, Mason is creating some of the most vital, exciting art of her career. She has the demeanor of quiet wisdom and spritely equanimity that sometimes age brings to the fortunate. To these is added an enduring drive to make work possessed of her passionate and intuitive sense of artistic rightness. As the title Inner Resources suggests, these deep-seated aspects of her remarkable character are drawn upon and made manifest in the paintings that comprise this exhibition. Mason’s spirited works are her biography: testimonies of experience of the beautiful, and visual chronicles of an all-too-rare dedication to artistic forms that speak directly to enlivening the mind and the heart. In making her work, she plumbs a rich internal reservoir of memory and feeling, filled from a lifetime of looking, in order to draw essences from the experiences that inflect her work. These she distills through her creative intuition into a distinctive and eloquent visual language. She uses this language to create on canvas a synthesis of impressions about the observed and the felt, and forges it into an art of the sensual. This has been the way of Mason’s genius as an artist, with an approach to making art that has become known as lyrical abstraction. With it, she creates the vibrantly enchanting paintings for which she is renowned. Her work evinces a vision that sees art not as a vehicle by which to imitate the observed, but rather as a means to express its poetic resonances. It is in these resonances that Mason’s paintings possess their extraordinary power to connect with others. Her memories of beauty are so eloquently expressed on canvas that they readily illicit the viewer’s memories, too. Helen Frankenthaler said about this kind of art: “You just know that it sends you … that this is beautiful.” From Mason’s resolute dedication to expressing in her paintings the essential elements of the beauty she sees in the world around her—especially that of nature—she continues and extends 2

the enduringly immutable values of aesthetics. Her work embodies a continuity of artistic impulse that connects her with currents that extend all the way back even to classical antiquity. It is her masterful ability to extract essences of beauty and to express them with such clarity in her work that confers on it a kind of immortality and a unity with the classical ideal of the beautiful. That connection results, too, in a sense of universality that explains in part the power of Mason’s paintings to move the feelings of her viewers and to sustain looking and enjoyment by generations of observers. Mason’s experience envelops her artistic outlook and, in turn, that outlook guides her experience. Being in nature inspires her painting, and her painting entices her to be in nature. These converge synergistically in a pictorial style that is neither specific as to subject nor solipsistic artistically. Although there is an inviting allure of mystery in Mason’s work that comes from her inner being and her love of discovering the new, there is also a sense of omneity that arises from her interpretation of the rhythms of nature. Like the pulsing of musical notes, these rhythms vibrate from her colors and compositions and act to stir the imagination and jostle the spirit. In the meshing of the seen and the felt, she confers on her work the grace of passions shared with others. Mason’s process is key to understanding much about the power of her work. In the recent RAVA Films documentary, Emily Mason: A Painting Experience, Mason explains “I always begin a painting with blank canvas and not any preconceived idea of what it’s going to look like. I just sort of react. I can’t predict it, so I let the materials suggest the next step and then I take it from there.” Spontaneity is at the core of how she approaches making her art. Paintings begin in inspiration, become a collaboration with chance, and end in discovery. She says, “it’s a process of letting a painting talk to you…I want a painting to take me to a place I’ve never been.” Mason is legendary for her resolute persistence in search of the new in her work. She lives artistically on the thrill of discovery and is tenacious in its pursuit. She abhors the idea of settling for initial impulses and engages with a painting over and over—always pushing, constantly evaluating, doggedly reworking—in an incessant creative exploration, looking for the fresh, the new, and the resolve that has not yet arrived, until finally she finds it in the work. An interesting confluence of confidence and uncertainty, the search is intense but joyful, elusive yet eager, challenging but willing, free yet disciplined. It is as much spontaneous as it is studied—as fluid as it is structured. It is infused by both a profound sense of freedom and an experienced regard for the possibilities and limitations of material. The quest entails a profound orchesis of intellectual, emotional, and physical interaction between 3

artist and her canvases. Mason often works with them on the floor or laid flat on a table. She will begin by pouring, dribbling, staining, or brushing paints onto the surface, then will rotate, tilt, blend, and rub, adding and subtracting pigment, creating layers and veils of color, flipping the painting around, turning it to the wall, pouring more paint on it, changing its orientation, finding one color that dominates and maybe correcting that; the dance is exhausting. All the time she is looking, thinking, reassessing, letting the painting talk to her, letting it take her to that place she’s never been—and feeling joy in all that effort that radiates from her canvas to make a beautiful painting. A Mason painting may take many months or it may take years. She works from one brush stroke to the next, and goes where her paint takes her. The process allows for an infinite number of possibilities; she stops only when the painting reaches a point where, as her studio assistant Steven Rose observes, she “feels it in her stomach, a sense of satisfaction that the painting has reached what she was striving for.” That arduous process has its rewards: for the artist it provides a new way of looking at things; it has “taken her to a place she’s never been.” For the rest of us, it results in the remarkable individuality of paintings that never feel the same. Color forms the structure of a Mason painting. In a way, Mason is like a choreographer of color: she moves paint, urges pattern, but she cannot fully determine every part of the final composition. And this is for her a large part of the grace of her work. Her materials and their physical properties are partners with her in the creative enterprise. Their interplay, relationships, the forms they comprise, their intensities, densities and fusions, are made to interact in complex combinations that represent the intersection between artistic intent and physical forces that cannot be entirely controlled through intent. From this place of “inner resources,” Mason coaxes and distills impressions onto her canvases. These represent the essences of her experience and exist at the junction of memory and imagination. They are the concentrated visual tinctures of what remains, like treasure from that lifetime of being in the world, of looking closely and caring deeply. From the conscious and unconscious mind, moved by a loving heart, and stripped of represented object, these impressions become pure sensation. And it is colors that record these sensations and remind us of being in nature. It is the colors and their interplay—the transitions and impingements between them, the diminuendo of a color against the white of a primed canvas—that give these paintings such life, and confer on them a timeless quality of universal consequence. Thinking about Mason’s work, one can’t help but be reminded of the words of Agnes Martin: “Our inspirations come as a surprise to us. Following them our lives are fresh and unpredictable. The unfolding of potential, in obedience to inspiration, is happiness in life.” Fresh, unpredictable,

surprising inspirations are at the center of how Mason makes her art, and they are a key to understanding how, by extension, art comes to engender enduring feelings of happiness in her viewers. Wolf Kahn, the well-known painter and Mason’s husband of more than 60 years, summed up his wife’s work this way: “Emily paints the way a bird sings.” Free, full-throated, and with a beauty that stirs the heart and touches the soul. Such is the stuff that comes from Mason’s “inner resources.” It is the place important things come from—her discovered things on the other side of the unknown and the permanent things that enrich our lives. They are the things that make Mason’s work lastingly great. Kenneth R. Marvel