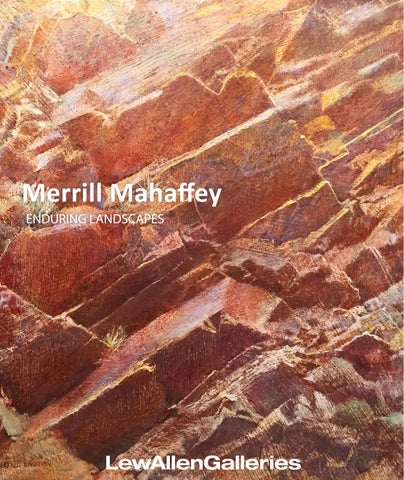 Merrill Mahaffey Enduring Landscapes With a career spanning more than 50 years, Mahaffey creates art known for its valorization of the simple, time-chiseled details of Western America’s rocky terrain. Mahaffey’s paintings serve as modes of inquiry into the true nature of landscape, and the allegorical possibilities of their association with the myth of the American frontier. Avoiding the blandishments of saccharine sunsets, overly sentimental vistas and exaggerated skyscapes manifested in many romanticized Western landscapes, Mahaffey chooses as his subject the extraordinary within the ordinary: the simple, time-chiseled details of the land itself. His paintings capture the powerful sunlight, cascading geological formations, and breathtaking sense of timeless grandeur long associated with the landscape of Western America. His images feature the literal bedrock of the west and, metaphorically, the solidity and strength of the American character associated with it. His cascading rock faces, slowly carved by ancient rivers, reference the immensity of time, far beyond the scale of human history and imagination. His art displays a mastery of color and light, referencing the prevailing and eternal forces of nature, time, and the intense radiant light in the American West. His treatment of rocks is as though they are prisms; reflecting a rainbow-like array of hues as though through glass. Citing the abstract expressionists and color field painters as major influences, Mahaffey’s manner hints at an underlying abstraction. His art reflects an analytical eye with a clear interest in the nuances of geology and science; with it he searches for the abstract underlying structures and patterns that exist within the DNA of the land. “In his work is none of the easy iconography that typifies life in his part of the country. The facts of the condition in which he lives have proven sufficiently compelling to those who have bothered to look,” Harry Rand, former Curator at the National Museum of American Art in Washington DC writes. “Rather than the hokum of sharply raking dawns and sunsets, Mahaffey takes his cue from Manet." 2

Mahaffey was born in Albuquerque, New Mexico in 1937, and received his arts education from the University of Arizona and the California College of Arts and Crafts (now California College of Arts). His paintings reside in the permanent collections of esteemed museum collections across the country, including the Smithsonian Museum of American Art in Washington, DC, the Metropolitan Museum of Art in New York, the Phoenix Art Museum, and the Denver Art Museum.

above: Cliff Matching, 2016, acrylic on canvas, 24 x 36 in opposite: photo of the artist, courtesy of Rendezvous Royale 3

“The whole pace of life is going so fast. But when I go into the canyon, I get to drop back into geologic time, where the seasons matter and time moves slowly. These are the aspects I’m trying to communicate with my painting, rather than fashion or style.” Merrill Mahaffey, If Stones Could Speak, 1993

â&#x20AC;&#x153;Presented as natural metaphors, these paintings have, at least, dual symbolic functions. Rocks age and fracture. I, the artist, study them like palm reading and try to isolate images denoting my interpretation of these rock palm prints. The life line is the nearest water.â&#x20AC;? Merrill Mahaffey, If Stones Could Speak, 2000

“Mahaffey has avoided the commercially remunerative game of being a westerner… In his work is none of the easy iconography featuring paraphernalia that—to the rest of the world, rightly or wrongly but mainly through movies— typifies life in his part of the country…Rather than the hokum of sharply raking dawns and sunsets, Mahaffey takes his cue from Manet.” Harry Rand, Senior Curator Cultural History, Smithsonian Institution "Merrill Mahaffey: Cue from Manet," 2000

â&#x20AC;&#x153;Like Ralph Waldo Emmerson and painters of the Hudson River school such as Thomas Cole and Frederick Church, Mahaffey views the natural world as the expression of the creative power of the universe. His reverence for the land is balanced with a keen, analytic temperament.â&#x20AC;? Alan Petersen, Merrill Mahaffey: Interior Views of the West, 2008

Rocks are the bones of the earth, water its lifeblood and the element which makes the earth livable for all others. Rock, just like organic matter, has its own slow-paced life as seen in the glaciers, streams, lakes, moraines and cliff fractures. My art asks that we try to understand the land as more than scenery.â&#x20AC;? Merrill Mahaffey, If Stones Could Speak, 1987