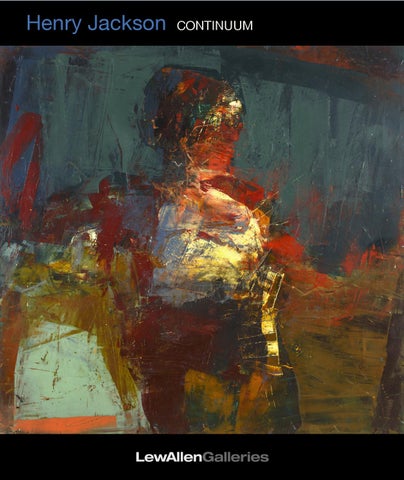 HENRY JACKSON Continuum If there were to be some label for the abstraction of Henry Jackson, it might be something like “mindful intuition.” His process is complexly suggestive of an astute technician – combining wax, solvent, and pigments, then applying them to canvas with tools that force muscular expression – while his mode of creating derives from an imagination teetering between pure spontaneity and adept contemplation. About this, Jackson says “For the most part I rely on my emotions while working on any piece. My process begins with no preconceived idea. I believe in allowing the work to dictate its own direction and conclusion. I will also rely on the left brain to assist with more academic decisions to move the piece along. I’ve learned that everything is a shape, whether familiar or otherwise. It’s the ‘other’ that intrigues me.” This juxtaposing of the expected and the unforeseen is precisely the dynamic tension that infuses serious energy into Jackson’s work, indeed allowing it “to move forward.” From the jostling of the raw and the refined, the instinctive and the learned, there emerges a beguiling accord between physicality and artistry that produces masterful resolve. It makes for the extraordinary allure and even uncanny sense of connection these paintings seem to have for the viewer. In a way, Jackson’s paintings become visual metaphors for the larger entropies pervading contemporary life. Political battles, culture wars, interpersonal conflicts – the chaotic, eroding jumbles of uncertain existence – all engender endless human struggle and leave an unrequited longing for resolution that seems eternally to elude actualization. Jackson’s complex visual orchestrations grapple vigorously with agitating emanations of the physical, emotional and intellectual realms. But unlike the work of various egoistic abstractionists whose phantasms of marks and globs seem more nihilistic or self-absorbed histrionics than painterly virtuosity, Jackson’s compositions generally evolve toward an uncannily reassuring and pleasing sense of grounded conclusion. Rather than cynical angst, Jackson’s works reflect his innate impetus toward beauty and offer a deeply affecting and more hopeful feeling – subconscious as it may be – that out of the grinding tumult a gratifying resolution can emerge. The prospect for enduring, surviving, prevailing in the midst of chaos exudes from the pure energy and artistry of a Jackson painting. The works possess an enticing feeling of completion. Though they fulminate with roiling gestures that contend intensely with areas of ebullient color, there is also a remarkable sense of control, a final unity of facture that offers a gratifying sense of pictorial stasis that is both sustaining to the intellect and nourishing to the soul. With their spirited energy and technical mastery, Jackson’s paintings yield up an elusive but gorgeous equilibrium between release and reserve, let-loose freedom and disciplined process – encomiums of enduring beauty for the eye as well as the mind. In creating these paintings, Jackson engages a dialogic exchange between his sense of reality from the 1

observed, the felt and the imagined. He speaks of allowing his subconscious to be his guide. He says that it acts as a reservoir of experiences gathered and stored and which inevitably influences his work. When, for example, he is asked about the degree to which the particular color vernacular and land forms of San Francisco and northern California might be involved as inspiration – as in the case of his Bay Area Abstractionist predecessors Richard Diebenkorn, Walter Kuhlman, Robert McChesney or Edward Dugmore for example – he notes that he remains very open to his natural surroundings even as the work itself proceeds mainly from intuition and spontaneity rather than premeditation. The saturated earthy colors of the region certainly are evident in the work – as they were in that of other Bay Area practitioners. But Jackson’s undelineated organic shapes – largely absent vertical or horizontal lines traversing the entirety of the pictorial plane suggestive of land forms or horizons – seem to come from a place altogether different from an earthly one. The combination illustrates the degree to which the work proceeds initially from an inner emotional realm merged with a subconscious but meditative awareness of the world outside the artist. The ambiguous relationship in Jackson’s compositions between the familiar and the unknown is a kind of metaphor for the artist’s aesthetic afflatus rooted deeply in freedom and the spontaneous. It also provides part of the work’s intense appeal. In some of his paintings there appear amorphous allusions to the human figure that seem simultaneously vaguely familiar and evocatively mysterious. He refers to this aspect of his painting in terms of making “work whose narrative is never specific and usually gives way to many readings. I’ve always liked the idea of paintings that convey an ever-changing dialogue. Something that reacts with mood or the feeling of a day.” It is in this context of creative wrangling waged within the artist’s subconscious that vague allusions to the human figure sometimes can be read. Images simply emerge that are roughly identifiable as suggestions of the anthropomorphic. As with other aspects of Jackson’s painting, spontaneity leads the image-making. When they appear, the figures seem perfectly imperfect, apparitional renditions left in a state of ambiguity to court the imagination with an intriguing sense of mystery. Their indistinct form invites questions about the human quest for idealized notions of body and immortality. These indistinct forms attain artistic power in a raw beauty that proceeds from embracing, rather than denying, the entropy that inevitably afflicts human existence. Jackson says of his intentional lack of identifiable feature or form: “This tearing down of the figure is where I begin to see truth.” Flickers of the recognizable dissolve into miasmas of seductive uncertainty that inveigle engagement with the eye and sustain wonder in the mind. His work seems to possess indistinct but resonate connections to some primal shared past. Acknowledging this aspect of his work, Jackson says “I’ve al2

ways been interested in archeology, the discovery of what was. Which is why my work has a primitive look and feel to it. That is intentional. I think the primitive is something we all relate to naturally. Whethe or not the viewer realizes it. It is my hope that that rawness will be the catalyst to want to go into the work.” Jackson is also very specific about the importance of the physical in the creation of his work – both the materials and tools he uses as well as the exertion and involvement of his body in the process. In almost all his paintings there is evident sensuous muscular paint handling that imparts singularity to his expressionist style which, when combined with his distinctive color palette, conveys a visual signature that is nearly unmistakable. He asserts that “The act of painting becomes more physical, less intellectual and is dependent on the media to help agitate and provoke the work along.” He is regarded for his choice of materials and unique technique using pigmented cold wax that he has developed over many years of experimentation and evolution. He notes their importance to his process: For me, this medium (pigmented cold wax) took quite some time to get accustomed to. And after all these years, I am still learning things about it, which I enjoy. I like that it keeps me thinking. Unlike the encaustic process, which is to “burn in,” cold wax is created by using solvent to break it down, which then converts it to paste. From that, I add oil paint and/or dry pigment powder, and apply it to the canvas surface using more awkward, less detail-oriented tools (i.e., spatulas, painting knives and trowels). I prefer these tools to brushes because I like the way they resist detail and preciousness. They heighten the physicality of the process which creates an interesting dynamic combined with intuitive thinking. These tools also allow me to control the wax’s translucency and opacity, allowing me (and the viewer) to feel and see the journey of any given work. The freshness of Jackson’s work remains in its unplanned inspiration, its capacity to follow fortuity and confer the feeling of the freely made. Its sustaining genius resides in its ability to inspire exhilaration of beauty from authenticity, joy of freedom from spontaneity, and hopeful repose in the midst of fear and conflict from the honest tracings of an artist’s mind, body and heart.