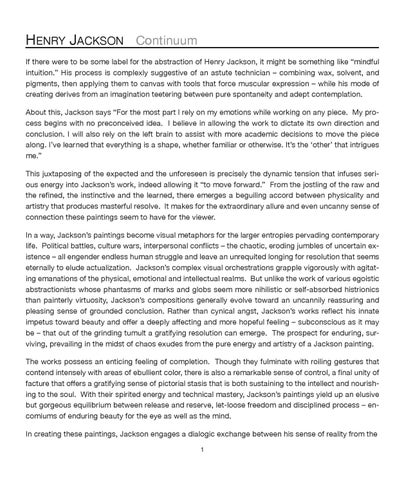 HENRY JACKSON Continuum If there were to be some label for the abstraction of Henry Jackson, it might be something like “mindful intuition.” His process is complexly suggestive of an astute technician – combining wax, solvent, and pigments, then applying them to canvas with tools that force muscular expression – while his mode of creating derives from an imagination teetering between pure spontaneity and adept contemplation. About this, Jackson says “For the most part I rely on my emotions while working on any piece. My process begins with no preconceived idea. I believe in allowing the work to dictate its own direction and conclusion. I will also rely on the left brain to assist with more academic decisions to move the piece along. I’ve learned that everything is a shape, whether familiar or otherwise. It’s the ‘other’ that intrigues me.” This juxtaposing of the expected and the unforeseen is precisely the dynamic tension that infuses serious energy into Jackson’s work, indeed allowing it “to move forward.” From the jostling of the raw and the refined, the instinctive and the learned, there emerges a beguiling accord between physicality and artistry that produces masterful resolve. It makes for the extraordinary allure and even uncanny sense of connection these paintings seem to have for the viewer. In a way, Jackson’s paintings become visual metaphors for the larger entropies pervading contemporary life. Political battles, culture wars, interpersonal conflicts – the chaotic, eroding jumbles of uncertain existence – all engender endless human struggle and leave an unrequited longing for resolution that seems eternally to elude actualization. Jackson’s complex visual orchestrations grapple vigorously with agitating emanations of the physical, emotional and intellectual realms. But unlike the work of various egoistic abstractionists whose phantasms of marks and globs seem more nihilistic or self-absorbed histrionics than painterly virtuosity, Jackson’s compositions generally evolve toward an uncannily reassuring and pleasing sense of grounded conclusion. Rather than cynical angst, Jackson’s works reflect his innate impetus toward beauty and offer a deeply affecting and more hopeful feeling – subconscious as it may be – that out of the grinding tumult a gratifying resolution can emerge. The prospect for enduring, surviving, prevailing in the midst of chaos exudes from the pure energy and artistry of a Jackson painting. The works possess an enticing feeling of completion. Though they fulminate with roiling gestures that contend intensely with areas of ebullient color, there is also a remarkable sense of control, a final unity of facture that offers a gratifying sense of pictorial stasis that is both sustaining to the intellect and nourishing to the soul. With their spirited energy and technical mastery, Jackson’s paintings yield up an elusive but gorgeous equilibrium between release and reserve, let-loose freedom and disciplined process – encomiums of enduring beauty for the eye as well as the mind. In creating these paintings, Jackson engages a dialogic exchange between his sense of reality from the 1