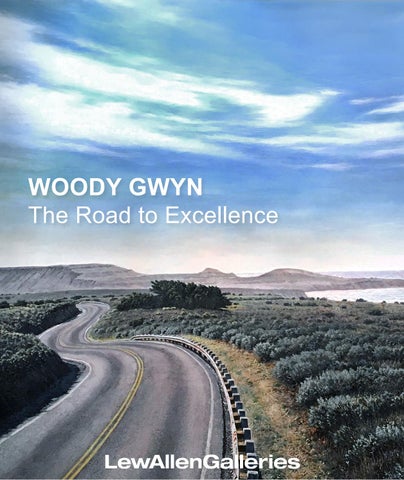 WOODY GWYN The Road to Excellence

One of America’s foremost contemporary landscape painters, Woody Gwyn captures the crystalline light and vast expanses of our changing American terrain. His work is characterized by dramatic angles, panoramic formats, startling color, aggressive cropping, and an acute contrast between the natural and manmade. Whether depicting monumental Western mesas, tranquil wooded clearings, or shimmering oceanic vistas, the results shatter conventions to offer new ways of seeing a world he reveres. As landscape painting marks the state of our conception of nature, Gwyn familiarizes us to shifts in our contemporary vision. The breadth of his strikingly horizontal panoramas invokes both the proportions and the extended temporal involvement inherent to cinema as they slowly lead the eye through sensuous ribbons of scenery that resist immediate comprehensibility. His frequently downward-canted, aerial views reveal a land we’ve come to better understand through the technologies of aerial photography and satellite surveillance – an Earth equally expanded and neutralized by distance. Departing from the increasingly conceptual protocols of contemporary art, Gwyn emphasizes that landscape is not merely a construct shaped by human ideologies and cultural policies—that, in fact, it continuously moves and shapes us. Informed by this perception, the vast horizontal formats of his recent canvases, which measure up to 16-feet in length, encourage the active physical engagement of their audience. Mirroring the experience of encountering the overwhelming views they depict, it is impossible to perceive the entirety of these intricately detailed paintings in a single glance. They invite us to traverse their lengths, stopping often to experience the full wealth of their sensory information. Gwyn’s art embraces landscape as something greater than us; the spaces it depicts are at once the subjects of abstract contemplations and, like our bodies themselves, the very framework of our complex material reality. Confronting the fragmentation that defines our era while eschewing the conventions that defined the past, he offers visually persuasive renderings of points at which cultural history and contemporary society converge. Woody Gwyn was born in San Antonio, Texas, in 1944, and received his arts education from the Pennsylvania Academy of the Fine Arts. For the past forty years, his work has been presented in solo and group exhibitions in a wide array of premier national and international museums including the Tel Aviv Museum, Tel Aviv, Israel; le Centre Nationale des Arts Plastiques, Paris, France; The Museum of Fine Arts, Houston; the Luther W. Brady Art Gallery of George Washington University, Washington, D.C.; and the Museum of Fine Arts, Santa Fe. His monograph, Woody Gwyn, produced by Texas Tech University Press records the artist's unique contributions to contemporary landscape painting. He is the recipient of New Mexico's highest artistic honor — the 2010 New Mexico Governor's Award for Excellence in the Arts. 2

Woody Gwyn The Road to Excellence

Woody Gwyn The Road to Excellence