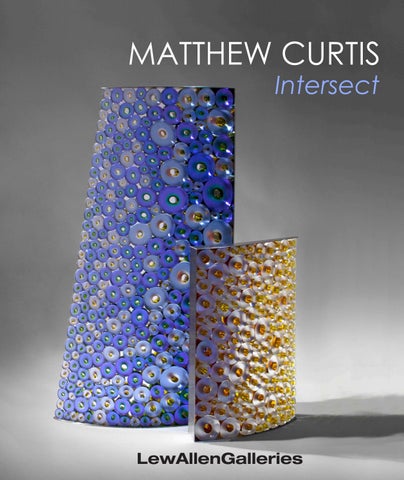 Matthew Curtis Intersect Drawing upon an ongoing fascination with both architectural and biological forms, Australiabased glass artist Matthew Curtis creates sweeping, organic forms from glass, colored oxide, and steel. Today regarded as one of the most innovative, up-and-coming voices in contemporary glass sculpture, LewAllen Galleries presents an exhibition of new works by Curtis, entitled Intersect, opening with a reception on Friday, June 8 and remaining on view through July 15, 2018. Combining unlike materials and developing his own color tints, Curtis is known for his innovative technique, as well as his concerted effort to broaden both the visual and formal possibilities of glass art. Matthew Curtis’ masterful glass sculptures are imbued with interlocking networks of rhythm, harmony, and shining color. In creating his complex glass works, the artist draws our attention to the elemental details of our surroundings: the organic within the architectural, and, too, the patterns hidden within the natural world. With visual motifs that reference growth, order, and strength, Curtis’ forms allude to structural geometry at all scales, from cellular tissue to vast architectural space. His dynamic sculptures play with texture and transparency in layers of cascading, radiant colors, referencing the built world through the material language of steel and blown glass. Upon close inspection, each finelyconsidered element is similar but not identical to the next, revealing Curtis’ careful articulation of form through lyrical, rhythmic curve and contour. Born in Luton, England in 1964, Matthew Curtis moved to Australia in 1981. He began as a glassmaker in 1991, assisting Robert Wynne at Denizen Glass while simultaneously developing his own artistic voice. His work has been included in many private and public collections including the Saxe collection at the De Young Museum, San Francisco, CA; the Ernsting Stifting Museum, Coesfeld, Germany; the National Glass Collection, Wagga Wagga, Australia; and the National Gallery of Australia, Canberra, Australia. 2