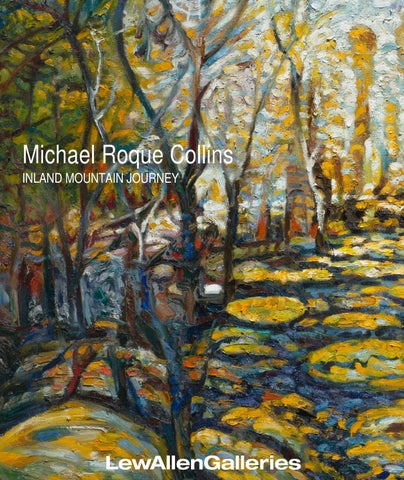 Michael Roque Collins Inland Mountain Journey The passions of men are incorporated with the beautiful and permanent forms of nature. William Wordsworth Post-symbolist Michael Roque Collins’ luminous and epically metaphorical paintings are siren calls to the mind and spirit. With combinations of signature imagery drawn from lucid dream, memory and cultural myth, his newest body of work, entitled Inland Mountain Journey, blends representation with abstraction. The series is comprised of what the artist calls “sacred landscapes,” referencing vibrant wooded vistas, bodies of water, blooming vegetation, architectural relics and, occasionally, the apparition of a human figure. Collins’ work stands as a bridge between two realms: “My paintings live in the space between one’s brokenness and where nature redeems. My paintings are a kind of growth journey, exploring the point at which decay and regrowth collide in a triumphal flash of renewal, where the past informs hope for the future.” Voiced through powerful imagery sublimated in layers of thick paint, the fantastical settings in this new series of paintings provocatively engage relationships between the physical world and the spiritual, between cultural memory and personal psyche. The works reflect on enduring themes rooted deeply in the artistic imagination of a man whose learning is deep, travels wide and observations acute. His experience feeds imaginative allusions in his painting about mankind’s journey through darkness into light, as well as cycles of despair and hope in man, and destruction and rebirth in nature. Beneath these dream-like scenes allegorical meanings lay hidden. As his context, Collins associates convulsions in nature with those that plague the human spirit. The ability of the land to endure such torrents as the ferocity of storm, desolation of drought or fire, and avalanche of earthquake attests to its resiliency. That which is washed away is replaced, new growth succeeds the dead in seasons’ passing, and the landscape resettles new forms from crumbled rock. The earth endures. It thrives. Collins conjoins his scenes of entropy with an evocation of resolving light featured in each painting as the

sublime signifier of renewal. The barren gives way to bloom, and darkened shadow yields to expanses of ascendant light. By analogy, he suggests a similar passage for the human psyche, one that is as immutable and ultimately regenerative. Through the optic of Collins’ landscape reveries there is a vision of renewal for the human spirit. From the ravages of personal calamity, through the struggle with anguish, and from the contemplation of life’s rubble to the remembrance of dreams’ invigorating power, there is a redeeming moment of healing silence and blazing insight. As with nature, we survive and we renew. Like nature, we thrive. The potential is there. Underpinning these visual odysseys is Collins’ ultimate sense of optimism. Throughout this body of work, he makes use of pictorial symbols and metonymies to depict and convey his insights concerning the ascendency of hope in the human condition. Areas of tenebrous gray give way to radiant luminance and signify the triumph of an upward striving soul over the downward pull of life’s adversities. Verdancy and new growth spring from the rubble of ruins, the visual semantic in Collins’ work for the potential rebirth of a human spirit wracked by despair. Primary among his allegorical narratives is the journey through struggle to the convergence of sanctified place and personal meaning. Enfolded within each work is the resonance of a psychological pilgrimage echoed from transit across his landscapes – through isolated ruins, darkened forests, apocalyptic fires, engulfing waters – and ultimately then to ascendant clearing places of light and color that serve to herald the full radiance of clarity coming in the wake of struggle. With fragments of hope ensconced within their evocative imagery, Collins’ paintings become reliquaries of promise for the recuperation of the human spirit. Of particular significance in these works is Collins’ fascination with traces of man’s past presence. He uses architectural materiality to denote remnants of human intervention upon the land. These remnants often take the form of ancient edifices – what art critic Arthur Danto termed “romantic poems in the medium of dilapidated stone.” Recalling the imaginative whimsical architecture of Venetian Giovanni Piranesi’s famous 18th century capriccio etchings, Collins invents his own hauntingly fanciful array of crumbling temples, decaying stairways, abandoned bridges, destroyed vaults – all eloquent testaments to the journeys through time that others have made. The ruins epitomize the temporal; that which is built to last a thousand years inevitably does not. Within the ruin there is the detritus of dreams, traces of conquest, vestiges 3

of personal hubris, and even emblems of noble intention. But despite the inexorable decay that befalls all that is built, ruins ironically endure. That irony does not escape Collins. For him, ruins contain, through memory, treasures of possibility. With an artistic vision that is capable of conceiving of beauty in the quotidian or even the terrible, Collins sees ruins as iconography for new beginnings rather than mere remnants of past endings. Collins portrays ruins as aesthetic objects and, in so doing, he confers on them new life: detritus transformed into inspiration. In their fragmentary remains he sees an invitation to continue on, to learn from ancient lessons, to refashion the unfinished. Ruins connect the past to the present and, in their actual and metaphorical dust, they offer rich potential for a more vital future. From ruins, Collins infers powerful metaphors: destruction transformed into beauty; the past, not as dead history, but rather as fecund source for a hopeful future; endurance even in the midst of the ephemeral. It is not surprising, therefore, that in the context of Collins’ “sacred place” landscapes, the ruin resides as a potent correlate for the course of human psychology. In his new series, Collins takes this conception of the ruin as vestige and its potential to herald a renewed future, and combines it with forms from the natural world to complete his elaborate allegories of the regenerative cycles he perceives both within nature and, similarly, within the individual psyche. In a mountain vista, for example, he sees its forests, pure water, and seasons of regrowth as evidence of ubiquitous regeneration. By analogy, Collins envisions healing possibilities for man’s inner psychological life – such things as learning, empathy, reflection, faith and hope that offer salutary opportunities for human transcendence as potent as the forces that transform nature. For Collins, landscapes are gardens of humanity. Much of the imagery and atmosphere of these new paintings emerge from his notion that landscape is both external and internal to human existence. To Collins, the landscape of the mind flourishes within the human psyche: the place where the tumult of emotions, thoughts, and imagination live, die, and regenerate – as with the course of life in the gardens and forests of his sacred landscapes. Collins is an extraordinary explorer of the enigmatic realm in which the world and spirit conjoin and 4

effloresce into inspiration for an ascendant spiritual vision. His paintings reveal bright images sanctified not by their own grandeur but resonant of a divine one that exists beyond his or any man's ability to fully grasp. In his intricate compositions, arrays of color, allusive forms, myriad cells of pigments, and sumptuous textures, there come together in Collins' work the sparks of an inspired and burning imagination. Collins describes this complex process as follows:

The process of my painting relates to my body movement and to the texture of surface, both its opacity and translucency. Pigment is applied by knife, hand, brush, scraping, veiling and pooling. The sequence of feeding the surface is completely subject to the energy held in each unique painting which I am sensitive to as its content evolves. Most ideas begin in a chiaroscuro world as color develops of its own accord. I follow the currents of thinking, feeling and willing, which will allow discovery to emerge.

The artist’s intention plays an important role, of course, but Collins’ paintings exist far beyond design. They are product of a remarkable interplay of the conscious and subconscious interacting to produce radiant visual poetry. As Collins notes: “Most fundamentally, my painting relates to the tenets of Post-symbolism, where each painting is an ethereal membrane suggesting the poetic as experienced through dreams, memory, mystery, and morphic resonance.” They attain their extraordinary potency as the imprints of the land's daemon, its genius and its power. In Collins’ work there is manifested what the French philosopher Jean-Paul Sartre suggests as the requirement for the imaginary process to occur. Sartre calls this an analogon – a symbol that creates the equivalent of perception, such as a painting or a mental image. Collins’ work embodies this idea and suggests from nature an infinitely meaningful analogon for insight about the human condition. Within its landscape and vast dimensions, its birth and rebirth, its states of entropy – hurricanes, earthquakes, volcanoes, erosion, tides – its beauty after a storm, its majestic mountains and its blooming fields, he finds in nature the master-allegory for a human rite of passage. In the cycles of nature’s progress, there is mirrored in Collins’ analogon the intense struggle that leads toward the possibility of human transcendence. All of this Collins expresses with what Shakespeare in Midsummer Night’s Dream called the “poet’s eye, in fine frenzy rolling.” He perceives the world with his own “seething brain” and privileges imagery that comes 5

in equal measure from observation and imagination without distinction. His paintings resonate meanings far beyond themselves, conjured by an imagination as great as any kind of magic. Awareness that is deeply felt erupts from his visual dialogues with nature, its cycles and forces, and the parallel march he implies for the human psychological journey. In the words of the great Bard, these paintings are indeed â&#x20AC;&#x153;such shaping fantasies that apprehend more than cool reason ever comprehends.â&#x20AC;? Kenneth R. Marvel